Sealed with a kiss! Trevor Lawrence and Marissa Mowry’s South Carolina nuptials were a sight to see. The Clemson Tigers star — who’s presumed to go No. 1 overall to the Jaguars in the NFL Draft on April 29 — shared the first glimpse at the couple’s weddin
Author: Jenna Lemoncelli
Published: 2021-04-12 02:49 pm 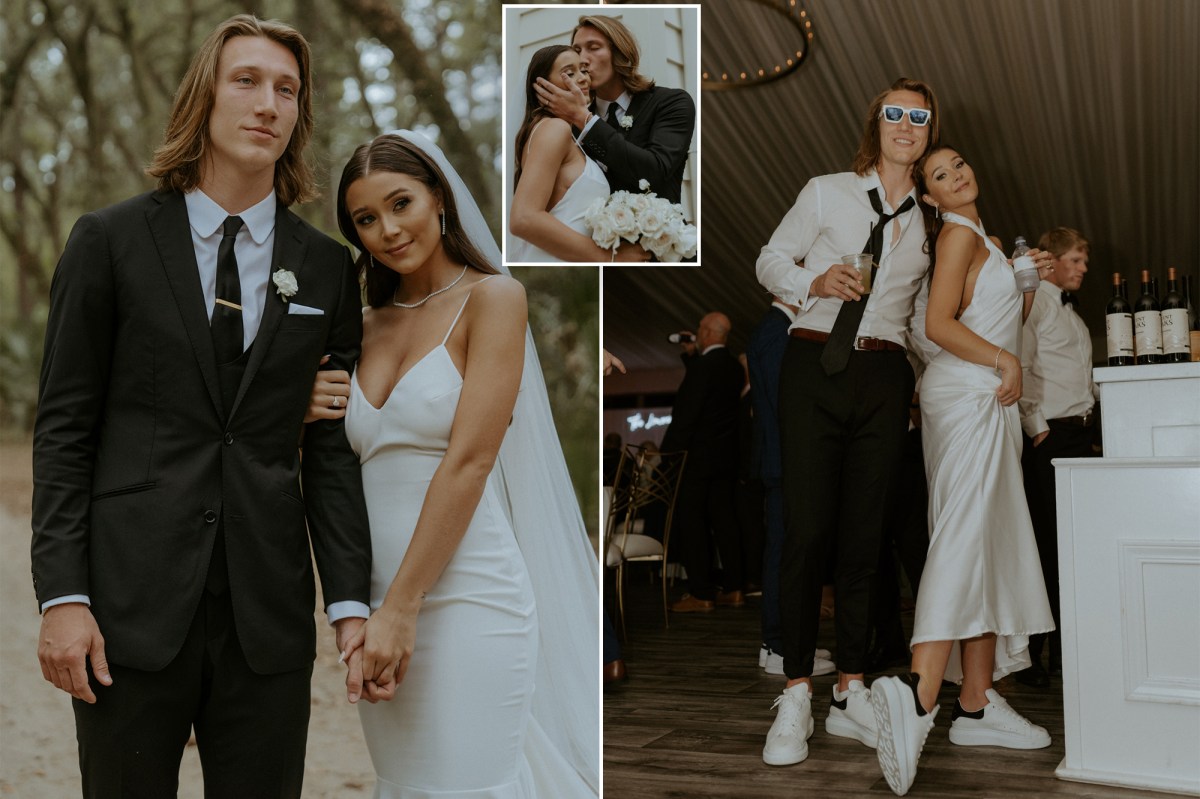 Sealed with a kiss!

Trevor Lawrence and Marissa Mowry’s South Carolina nuptials were a sight to see. The Clemson Tigers star — who’s presumed to go No. 1 overall to the Jaguars in the NFL Draft on April 29 — shared the first glimpse at the couple’s wedding video on Monday, courtesy of South Carolina-based company Recollective Films.

“Such an amazing day with friends and family,” Lawrence, 21, wrote on Instagram on Monday. “Here’s to life, Mrs. Lawrence,” he added, tagging his new wife in the post.

The couple’s nuptials, which took place at a chapel in Bluffton, S.C. over the weekend, included a picture-worthy champagne wall, dancing, sparklers and a menu that included seafood and pasta dishes. Additionally, a neon sign that read “The Lawrences” hung on a wall at the reception for guests to take photos underneath.

The intimate footage showed both Lawrence and Mowry in tears (of joy!). After they partied the night away with their closest friends and family, the newlyweds rode off into in the night on a golf cart.

Among those who congratulated Lawrence in the comments was fellow star quarterback Justin Fields. The Ohio State alum, who declared for the 2021 NFL Draft in January, could be selected not long after Lawrence.

Fields, who is slated to have his second pro day this week, is expected to fit in somewhere behind Lawrence and Zach Wilson (Jets) in the draft with Mac Jones and Trey Lance also in the mix for the No. 3 selection by the 49ers.

nypost.com - 3 months ago
Old Man Winter is still rearing his ugly head. Another storm could dump about 8 inches of snow on the Big Apple amid bitterly cold temperatures this week, forecasters said. Flurries are expected to start falling on the boroughs Thursday morning and
Read More

nypost.com - 2 months ago
PARIS — French President Emmanuel Macron on Wednesday announced a three-week nationwide school closure and a month-long domestic travel ban, as the rapid spread of the virus ramped up pressure on hospitals. In a televised address to the nation, Macron sai
Read More

nypost.com - 3 months ago
Mayor Bill de Blasio said he wants to tax the rich — he just isn’t sure what that means. Hizzoner — who has called for boosting taxes on the rich for years — couldn’t provide specifics when pressed Thursday about what income levels would trigger the new
Read More
More News & Articles