Hearty Basque Food That Hemingway Would Have Understood

Ernesto’s, on the Lower East Side, channels San Sebastián with an unfussy menu and a generous hand.
Author: Pete Wells
Published: 2021-04-12 03:47 pm 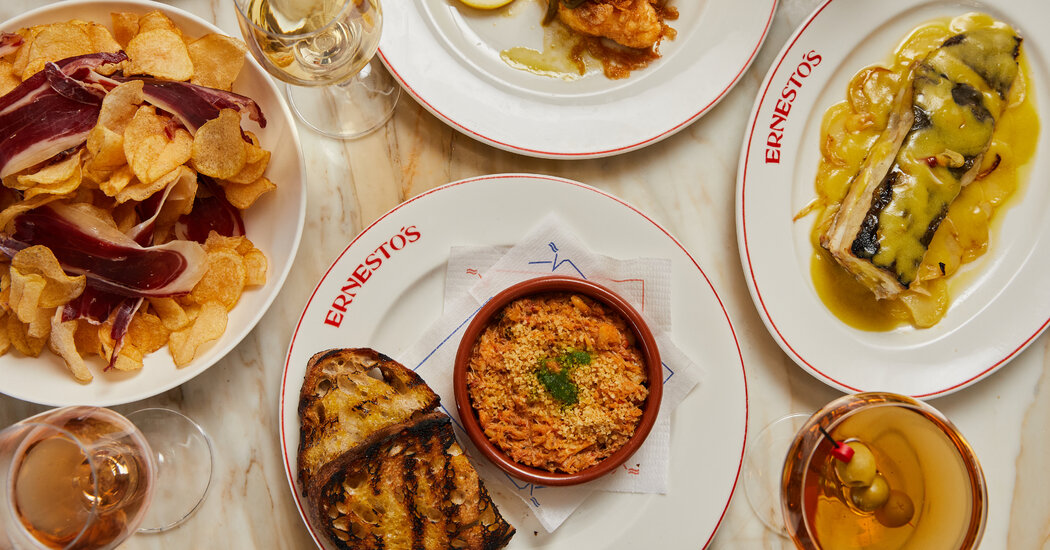 A lot of Spanish food sold in the city appears in dainty servings that are called tapas, even when a Spaniard might not recognize them as such. New Yorkified tapas are not what you eat at Ernesto’s, a year-old Lower East Side restaurant where the cooking is under the sway of Basque cuisine.

A few small plates are available, but they are called pintxos, for one, as they are in and around San Sebastián. They are also true bar snacks: txistorras, thumb-size sausages glowing red from paprika; a warm and almost puddinglike potato and egg tortilla; gildas, the tart and briny skewers made by impaling green olives, firm and chewy Cantabrian anchovies and whole pickled guindilla peppers on a cocktail spear.

The pintxos at Ernesto’s are ideal for keeping occupied while you wait for your friends to walk the eight or so minutes from the East Broadway stop on the F. Ideally you will also have a glass filled with vermouth or sherry or a blend of the two called a five-finger martini. When the last gilda is gone, you will be ready for dinner.

With the main courses, you see how un-small Ernesto’s food can be. A long raft of grilled turbot, whose fatty black skin protected the meat from the parching heat of the flames, bobs in a pale-gold sea of garlic oil thickened by the turbot’s sticky juices. A medium-rare collar of Mangalitsa pork, so red it could be sirloin, is fanned out next to a green expanse of minted peas cooked with duck ham. The peas, with a small white potato swimming among them for good measure, are so plentiful they almost slosh up on to the plate’s rim, which is wide and white and bears the ERNESTO’S logo in red, as if you were in some venerable old mesón where the waiters still wear black bow ties.

Ernesto is what Spaniards called Hemingway, both while he was living in their country and after he left, when they wanted to explain why English speakers thronged the tables of Casa de Botín in Madrid and the bar stools of Café Iruña in Pamplona.

As a whole package, Hemingway is a heaping spoonful of contradictions and unsavory attitudes, some of which are examined again in the new documentary by Ken Burns and Lynn Novick. As a strong, unabashedly romantic admirer of Spain and its culture, he is easier to swallow without choking. This is the Hemingway whom Ryan Bartlow, Ernesto’s chef and owner, was invoking when he opened the restaurant in the last week of 2019.

A certain style of Basque food was being invoked, too. This is not the forward-driving, often experimental cooking that has decorated the feeds of Instagram influencers and sucked up most of the Michelin stars dropped in and around San Sebastián in the last three decades. It is brusque, unreconstructed and satisfying food that hasn’t changed much since Hemingway’s day, a cuisine of grilled and roasted meats and seafood under a thick impasto of sauce that might have been laid on by a trowel. Garlic and onions feature in these dishes almost always; peppers frequently; tomatoes on occasion. Potatoes are never far away.

You can still find this kind of cooking in San Sebastián if you ignore the influencers. Mr. Bartlow first found it 16 years ago in a tavern on the ground floor of a building where he rented a room while cooking in Akelarre, one of the area’s most reliable Michelin magnets. Doubtless he has tucked bits and pieces of the more famous restaurant’s playbook into his menu at Ernesto’s; nobody goes to Akelarre to learn how to boil potatoes. But the rugged cooking of the tavern is his North Star.

Morels and foie gras are fancy by definition, right? Not in Spain, where wild mushrooms and fattened liver are both treats and regular ingredients at the same time. And not at Ernesto’s, where the morels are stirred with mushroom stock in short-grain rice to make a savory brown porridge, and the foie gras is a slab of terrine plopped down in the center of the rice. When this shows up, you don’t grab your camera. You grab your spoon.

There are fish sticks on the appetizer list at Ernesto’s, tall golden hunks of fried salt cod under wilted green peppers with a cut lemon and a pile of fresh mayonnaise on the side. The cod, the marvelous hot crab dip and a Devils Tower stack of Ibérico ham and potato chips seem to be constants on a menu that changes by the day and is about half the length it was before the pandemic.

Until the city went into hibernation a year ago, Ernesto’s was probably the busiest new restaurant in town. The curving chairs and bar stools, inspired by the Art Nouveau facades of San Sebastián, were back to back. At my last meal indoors, in March 2020, I had to walk sideways as I threaded my way through the packed dining room each of the half-dozen times I went to wash my hands.

Now 50 percent occupancy is the rule, although the most recent time I ate there, I and most of the other customers choses to sit at outside on Montgomery Street. My friends and I watched a cook carry an entire lamb wrapped in plastic into the kitchen, which by day shares its space with Ernesto’s small cafe. The event gave the night a kind of European atmosphere. The rat that clambered to the sidewalk from under a car and briefly nosed around my left foot was pure New York, though.

I told it to go away and it did. By that point my nerves had been calmed by a few natural wines from Pierre Darrien’s list, which is so imaginatively chosen that the number I tasted was just a small fraction of all that I was curious about.

A similar restraint was not shown at dessert, when I ordered almost everything they had. I remember liking the prepandemic torrijas, a French toast variant that used to be crunchy with caramel, a little more than the current one, which is more like a custard doughnut rolled in cinnamon sugar. Milhojas, a Spanish mille-feuille with cream between brown wafers that shatter on impact, seemed unchanged, and still excellent, as was the bitter dark chocolate cake with a scoop of strawberry ice cream to sweeten it.

Other desserts are on hiatus until the crowds are allowed back inside. In the meantime, outdoor customers might be interested in a new item that appears in the leftover space at the bottom of the menu: a fleece blanket with the Ernesto’s logo.

What the Stars Mean Because of the pandemic, restaurants are not being given star ratings.

Rosie Could Be a Riveter Only Because of a Care Economy. Where Is Ours?

www.nytimes.com - 4 weeks ago
The men and women who went to work and war during World War II were backed by the care economy — we need one too.d
Read More

What to Do This Weekend

www.nytimes.com - 5 months ago
The unwillingness of most Senate and House Republicans to acknowledge an obvious election result has moved beyond absurd.
Read More
More News & Articles