Judge expects jury to be sequestered next week 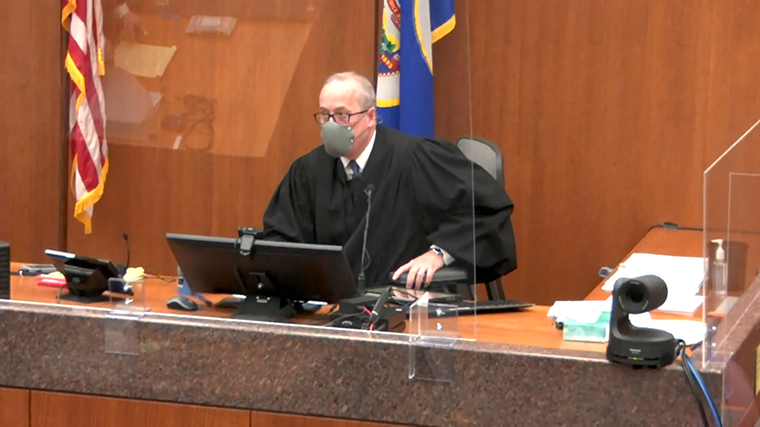 Before court adjourned for the day, Judge Peter Cahill gave the jury a timeframe of how he expects the trial to go.

"Now that we're getting closer to the end, we expect that we will be moving to the defense case tomorrow. And accordingly, we expect that we will finish all the evidence in this case by the end of the week. Possibly with even Friday off. My preference is not to make the attorneys close on Friday, because when they close, this case will be submitted for deliberation. Which means at that time, as we warned you long ago in jury selection, you will be sequestered," he said.

Cahill explained that if he were to have closing arguments on Friday, that means the jury would be sequestered over the weekend.

"My preference is, to give the attorneys more time to prepare their closing arguments, and have the closing arguments, we predict on Monday. At that point, you will be sequestered. So you will get some more information from the sheriff's deputies regarding that. But expect that you when you report for duty on Monday, that it will be followed by sequestration. So pack a bag," he continued.

“We have been preparing to ramp up for the close of the Chauvin trial, and we are prepared to ramp up law enforcement presence across St. Paul and across the Twin Cities,” Arrandondo said.

“It's necessary for the peace of our city and we also want to make sure that we are protecting First Amendment rights as much as possible,” Minneapolis Mayor Jacob Frey added. “We're collectively resolved to doing better.”

“Our plan was to get to phase three of the Operation Safety Net plan about the time of closing arguments, and yesterday's incident in Brooklyn center triggered the need to move faster into phase three,” Langer said. “Yesterday, we fortunately had about 80 state troopers from across Minnesota already in town, we kept them in town after learning of the incident ... and thankfully we did because they were easily deployed immediately upon when the need came in yesterday evening. We also deployed all of the phase three resources of the Minnesota State Patrol, and the Department of Natural Resources Conservation Officers.”

Minnesota National Guard Gen. Shawn Manke also said there are approximately 500 members on the streets of Minneapolis, St. Paul and Brooklyn Center, and that number could grow to 1,000 by the end of the day Monday.

“There have been rumors that the Minnesota National Guard has used non-lethal munitions in and around Minneapolis and St. Paul, I want to tell you that that is simply not true,” Manke said. “We have not used those we don't anticipate using those and we did not use those in any of the civil unrest support that we've provided over the last year.”

Law professor Seth Stoughton, a police use-of-force expert, testified that it was not necessary to place George Floyd in the prone position once he was taken out of the back of the police car by the officers.

Stougton said, "it's clear from the number of officers and Mr. Floyd's position and the fact that he's handcuffed and has been searched, he doesn't present a threat of harm."

"His actions don't indicate that he presents any threat of escape. And as he's saying "thank you" for being taken out of the backseat of the car, it would certainly suggest that the point of conflict that had provoked his resistance in the first place is over and suggests a lack of intention. Given the range of other alternatives available to the officers, it's just not appropriate to prone someone who is at that point cooperative."

Stoughton, who reviewed the evidence in the case and is being paid to testify as an expert witness, said that the prone position can be "useful" for officers trying to handcuff a suspect.

"The prone position is a very useful position in policing for getting control of someone for purposes of handcuffing them. Again, the prone position is just basically face down. Their chest, front of the hips on the ground. When officers are struggling with someone or when they're handcuffing someone they anticipate struggling with, you will often see officers put someone into is that prone position for purposes of handcuffing because it's very difficult for someone to fight or to resist as they're face down on the ground, especially once their arms are out at their sides."

He added, however, that placing someone in the prone position "is supposed to be transitory" and used for handcuffing. He said that "as soon as someone has been handcuffed, you take them out of that position."

Seth Stoughton, associate professor from the University of South Carolina school of law, who is also an affiliate professor in the university's department of criminology and criminal justice, is now testifying.

The witness said he studies the regulation of policing.

George Floyd was a "big mama's boy" who taught his family how to treat their mother with respect, his brother Philonise Floyd testified today.

"He was a big mama's boy," he said. "And being around him, he showed us, like, how to treat our mom, and how to respect our mom. He just — he loved her so dearly."

"Every mother loves all her kids. But it was so unique how they were with each other," she said.

He then described the day George Floyd learned their mother had died. He said his brother was talking to their dying mother on the phone, but she passed before he could get to her.

Philonise Floyd described his brother George Floyd's life and what it was like growing up with him during his testimony today.

He recalled that George Floyd was loved by his family and his community.

"He was so much of a leader to us in the household. He would always make sure that we had our clothes for school," Philonise said. "He made sure that we all were going to be to school on time. And like I told you, George couldn't cook. But he will make sure you have a snack or something to get in the morning. But he — he was one of those people in the community that when they had church outside, people would attend church just because he was there. Nobody would go out there until they seen him. And he just was like a person that everybody loved around the community. He — he just knew how to make people feel better."

At one point, Philonise Floyd wiped tears from his face after he was shown a photograph of his brother and his late mother.

"That's my mother. She is no longer with us right now. But that's my oldest brother George. I miss both of them," he said. "...I was married on May 24th I got married. And my brother was killed May 25th. And my mom died on May 30th. So it's like a bittersweet one, because I was supposed to be happen when that month comes."

Minnesota allows prosecutors to invoke the "spark of life" doctrine to call witnesses to testify about a victim's life.

Judge Peter Cahill just ruled that Morries Hall will not testify in the trial of former officer Derek Chauvin.

Hall is George Floyd's friend and was in the car with him the day he was confronted by police – and ultimately died.

What we know: Both the prosecution and defense had called Hall as a witness in the trial.

Defense attorney Eric Nelson said he planned to ask Hall about his interactions with Floyd that day, their suspected use of a counterfeit bill, whether he gave Floyd drugs and his statements to police about Floyd's behavior in the vehicle.

Hall's attorney, Adrienne Cousins, argued that he planned to use the Fifth Amendment's right against self-incrimination, and she asked the judge to quash his subpoena to testify. Cousins said she was concerned Hall's testimony could be used in a drug or third-degree murder charge against him.

At an April 7 hearing, Cahill said that any questions about potential wrongdoing would not be allowed, yet he said he would be open to allowing specific questions about Floyd's behavior in the vehicle that day.

The judge asked the defense attorney to draft specific questions on that point, which would be discussed at today's hearing.

Today Cahill reviewed those questions and ruled Hall's testimony would not be admissible.

Hall is currently in custody on unrelated charges of domestic abuse, domestic assault by strangulation and the violation of a protective order.

Judge Peter Cahill is deciding whether George Floyd's friend, Morries Hall, can be called as a witness at the trial.

www.cnn.com - 3 months ago
Investigators from the World Health Organization (WHO) looking into the origins of coronavirus in China have discovered signs the outbreak was much wider in Wuhan in December 2019 than previously thought, and are urgently seeking access to hundreds of
Read More

The smart way to refinance your mortgage

www.cnn.com - 3 months ago
Tim Tebow's career in professional baseball is over.
Read More

www.cnn.com - 5 months ago
President Donald Trump announced a wave of lame duck pardons, including two for men who pleaded guilty in Robert Mueller's investigation, as well as ones for Republican allies who once served in Congress and military contractors involved in a deadly
Read More
More News & Articles