Dozens of Black Lives Matter protesters rallied outside the South Carolina home of a soldier charged with assaulting a black man in a now-viral video. Videos showed a large group holding BLM signs and shouting through a megaphone Wednesday as they stood i
Author: Lee Brown
Published: 2021-04-15 07:17 am 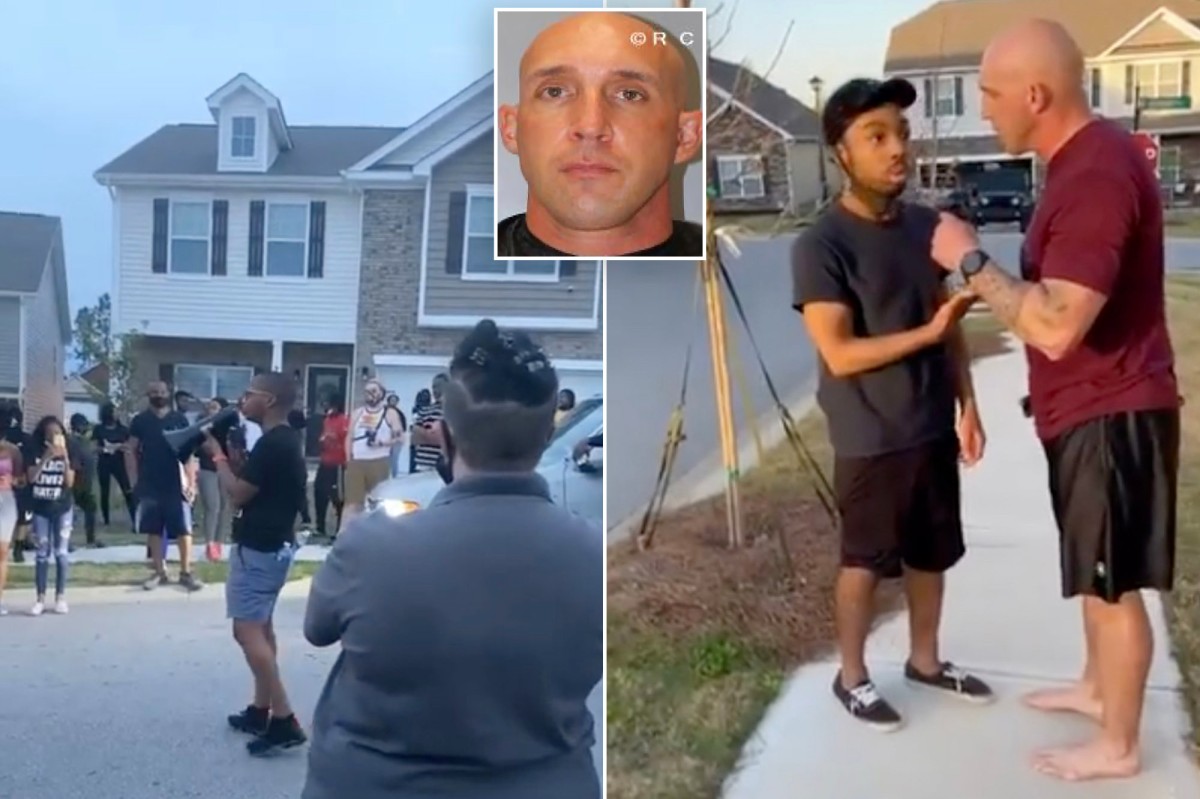 Dozens of Black Lives Matter protesters rallied outside the South Carolina home of a soldier charged with assaulting a black man in a now-viral video.

Videos showed a large group holding BLM signs and shouting through a megaphone Wednesday as they stood in the street outside 42-year-old drill sergeant Jonathan Pentland’s home just outside Columbia.

“I’m on your yard!” one woman was seen shooting directly at the house believed to belong to Pentland, who went viral for confronting a black man and telling him he was in the “wrong neighborhood, mother f–ker.”

“We just want to talk, we want to understand some things, that’s it,” she shouted in the video, as others said, “No justice, no peace!”

“What you gonna do? You gonna stay in here every day?” the main protagonist shouted. Other clips show even more protesters in the street shouting through megaphones later in the day.

It was not immediately clear if Pentland would have been home at the time as he was arrested Wednesday and charged with third-degree assault and battery for Monday’s caught-on-camera encounter.

The clip did not show what led up to the confrontation, but a woman could be heard accusing the stranger of picking a fight with “some random young lady,” which he denied.

Sheriff Leon Lott later said that man had been involved in other incidents in the neighborhood in the days leading up to the video but “none of them justified the assault that occurred.”

He did not elaborate on what he was accused of doing and refused to identify him.

“The first time I saw the video, it was terrible. It was unnecessary,” Lott said.

Pentland has been stationed at Fort Jackson since 2019 and has worked as a drill sergeant at the garrison, a 53,000-acre complex that trains 50% of all soldiers and 60% of women who enter the Army each year.

“This action deeply impacts our community–the neighbors in the Summit, the city of Columbia, Richland & Lexington counties, and our Army family,” Beagle said.

The Department of Justice is also investigating, the Army confirmed.

nypost.com - 5 months ago
Two City Council bills that seek stiff regulations to how fast food restaurants can fire employees were blasted by the business community Tuesday as a “sucker punch” to the COVID-19 ravaged restaurant industry.
Read More

nypost.com - 5 months ago
Pentagon officials have been ordered to halt cooperation with president-elect Joe Biden’s transition team, reports said Friday, as the Defense Department said it was being overwhelmed by the volume of transition meetings and would reschedule them for afte
Read More

Trump calls his supporters ‘great patriots,’ says they will ‘remember this day forever!’

nypost.com - 4 months ago
​President Trump followed up the video message he released urging his supporters to “go home in peace” with another posting telling the “great patriots” to “Remember this day forever!” “These are the things and events that happen when a sacred landslide
Read More

nypost.com - 2 months ago
The boyfriend of a woman shot during an armed robbery of a man’s high-end watch at an upscale Beverly Hills restaurant initially thought he was caught in the middle of a drunken fight. Drew Hancock was dining at the Canon Drive eatery with his girlfriend
Read More
More News & Articles