Brazil COVID-19: 'Humanitarian Crisis' With More Than 3,000 Deaths A Day 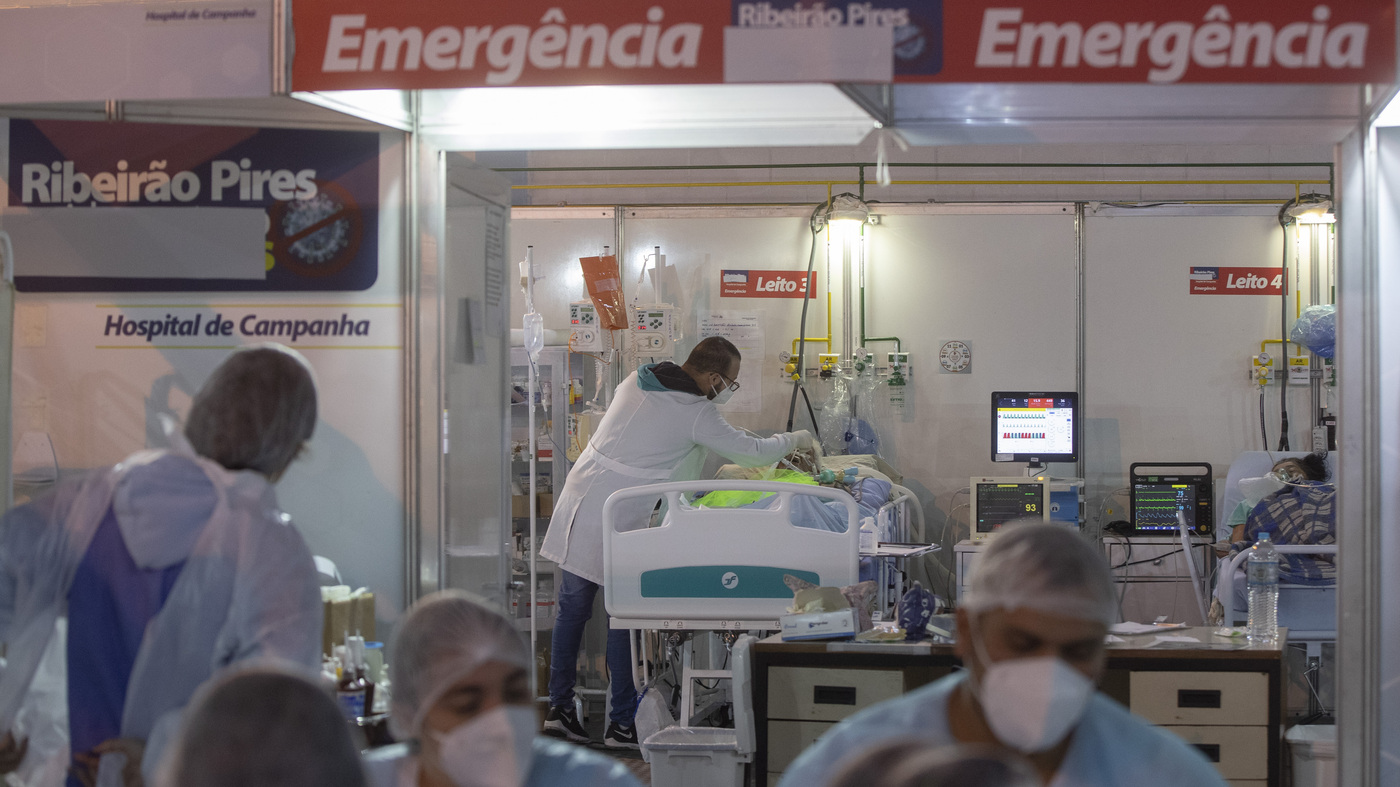 They say some health services have already exhausted stocks of certain drugs, while others expect to do so within the next few days unless they receive fresh supplies.

The warning comes amid intense international concern over the spiraling pandemic in Brazil, where the average daily death toll has risen above 3,000, the highest in the world. To date, 365,444 people in the country have died of COVID-19, according to Reuters.

Brazil's health crisis is being described as a "humanitarian catastrophe" by the international medical aid agency Doctors Without Borders (known by its French acronym, MSF), which has teams in parts of the country.

The "Brazilian authorities' ... refusal to adopt evidence-based public health measures has sent far too many to an early grave," MSF's international president Dr. Christos Christou said in a statement on Wednesday.

He said this has put Brazil in "a permanent state of mourning" and has caused "the near collapse of Brazil's health system."

The alarm over the lack of medicines is being raised, in particular, by the country's richest and most populous state, São Paulo, which has so far registered almost one in four of Brazil's total COVID-19 deaths.

In a letter sent Tuesday to Brazil's Health Ministry, the state issued an urgent appeal for fresh supplies and accused the ministry of ignoring nine recent requests.

The scale of the problem has been underscored by a survey conducted by an organization representing local health officials: This found that more than two thirds of the 3,126 municipal health services in São Paulo were completely out of muscle relaxants, while 961 had no sedatives.

Front-line medical staff are reportedly turning to less effective alternative drugs, yet there have also been Brazilian media accounts of patients being tied by their arms to their beds to prevent them reacting violently to intubation when they wake up.

One of the country's leading news organizations, Folha de S. Paulo, recently published photographs and video of patients on respirators with their arms tied to the sides of their beds in a hospital in the northwestern city of Porto Velho.

Medicine shortages are adding to the already intense pressure on the country's intensive care units, where often exhausted and depleted staff are struggling to cope with a second wave of the pandemic, propelled by new variants of the virus. In parts of the country, patients have died while waiting for ICU beds to become available, according to medical staff and victims' families.

Overall occupancy rates for ICU beds have dropped slightly recently but remain critical in most of Brazil, according to a bulletin issued Wednesday by Fiocruz, a national health research institution. It said 16 of Brazil's 26 states have ICU bed occupancy levels of 90% or above. In São Paulo, it was 86%.

São Paulo has long been highly critical of the response to the pandemic by President Jair Bolsonaro, who has had four health ministers since the first coronavirus case was reported in Brazil early last year.

The state is far from alone.

Bolsonaro is facing ferocious criticism at home and abroad for scoffing at the threat of the virus, undermining social distancing and isolation measures, advocating unproven remedies, bungling the national vaccination program and discouraging people from being vaccinated.

The far-right president's position has become still more uncomfortable following a decision by Brazil's Supreme Court on Wednesday to give the go-ahead to a Senate inquiry into his government's handling of the pandemic.

Bolsonaro has argued throughout that lockdowns and other pandemic restrictions inflict more economic and social misery than the virus itself. He fell back on that defense again Wednesday, with a vaguely worded warning that there will soon be "enormous crises" in Brazil.

"I am not threatening anyone, but Brazil is at the limit," he told supporters, adding mysteriously: "I am waiting for the people to give a signal because the hunger, misery and unemployment is there."

Russia And China Among Countries Holding Off On Congratulating Biden

www.npr.org - 6 months ago
Leaders in the Kremlin and Beijing, as well as in Mexico and Brazil, have conspicuously not congratulated the president-elect, instead waiting for legal challenges to be resolved. (Image credit: Alexander Demianchuk/Alexander Demianchuk/TASS)
Read More

Rescue Ship Unable to Recover Bodies of Migrants Near Libya

www.npr.org - 2 weeks ago
NPR's Audie Cornish talks with journalist Emmanuelle Chaze about the rescue ship Ocean Viking's response to a shipwreck off the coast of Libya last week, in which about 130 migrants drowned.
Read More

www.npr.org - 4 weeks ago
Disinformation and conspiracy theories are rampant on the Internet. One platform that's seen a surge in that content and disinformation is YouTube. We explore what the company is doing in response.
Read More

In Battleground Pennsylvania, Votes Are Still Being Tabulated

www.npr.org - 6 months ago
NPR's Steve Inskeep talks to Pennsylvania Lt. Gov. John Fetterman who has said that he expects the ballot counting to wrap up on Friday. President Trump had tried to stop the count there.
Read More
More News & Articles