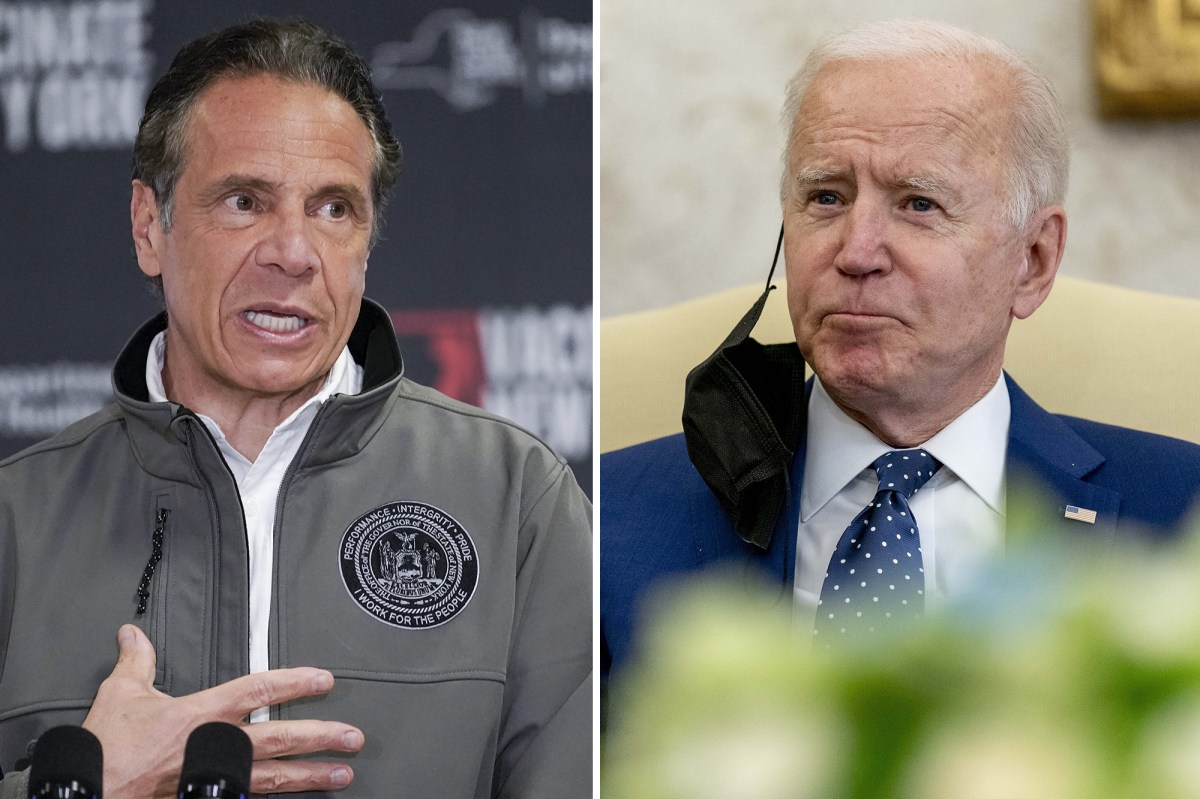 WASHINGTON — The White House won’t commit to lowering federal taxes for New Yorkers by abolishing the “SALT cap” as part of President Biden’s more than $2 trillion infrastructure bill — even as Gov. Andrew Cuomo uses the mere possibly to help sell his new state tax hikes on businesses and the wealthy by claiming people won’t see their overall taxes increase.

A bipartisan group led by New York-area lawmakers launched a new DC caucus Thursday to push for the federal tax reform, which most New York Democrats want to include in the infrastructure bill.

But the Biden administration continued to be cool to the idea. White House Press Secretary Jen Psaki said that it could add “potentially significant” costs to the bill by allowing residents of high-tax states like New York to deduct the full cost of their state and local taxes when they pay federal taxes.

And Democratic rifts emerged as Rep. Alexandria Ocasio-Cortez on Thursday bucked almost all other New York Democrats in Congress and came out swinging against full repeal of the cap in the infrastructure bill, calling it a “giveaway to the rich.”

Former President Donald Trump’s 2017 tax law established a $10,000 cap on state and local taxes — or SALT — that can be deducted when filing federal taxes. The change hammered middle class and wealthy people in states with high taxes like New York.

Psaki said Thursday at her daily press briefing that Biden didn’t include repeal of the SALT cap in his infrastructure plan and isn’t committed to changing course.

“Well, the president didn’t put it in his proposal, but I will say that we understand there are a number of members who feel strongly about the elimination of the SALT cap, and we are happy to hear from them,” Psaki said.

“As you also know, just with our little calculators out, it is not a revenue raiser and so it would add costs — and potentially significantly to a package. There would have to be a discussion about how that would be paid for [and] what would be taken out instead. And then there’s sort of a discussion of what’s most important to achieving our overarching objectives.”

The infrastructure bill is one of the best opportunities to change the SALT policy this year. Democrats may seek to ram the bill through Congress along party lines under special budget reconciliation rules that bypass the usual 60-vote threshold in the Senate, where many Republicans support keeping the $10,000 cap.

Biden proposed paying for infrastructure bill items such as home health care for seniors and subsidies for electronic vehicles with tax increases on businesses and higher-income people.

Advocates of ending the SALT cap, meanwhile, acknowledge it could cost the feds about $90 billion a year.

Senate Majority Leader Chuck Schumer (D-NY) “continues to be one of the main figures committed to repeal,” a Senate source told The Post, improving the outlook for the change being included in the infrastructure bill.

But the source said it’s possible that SALT cap will be addressed either in the infrastructure bill or in a separate and forthcoming bill designed to roll back provisions in Trump’s tax law.

Amid uncertainty in DC, Cuomo is spinning a $4 billion state tax hike on higher-income people and businesses by saying New Yorkers will see a net reduction in taxes if the SALT cap is repealed in the infrastructure deal.

“When you talk about this tax package you cannot talk about it without anticipating a SALT repeal,” Cuomo said last week. “When SALT is repealed, the taxes will be going down.”

“I want to be very clear as far as me personally: no SALT, no deal,” Suozzi told The Post on Thursday.

Suozzi took part in a Wednesday meeting in the White House with Biden’s chief of staff Ron Klain, but would not share details, other than to say “politics and governing and public policy is about negotiating. It’s about building relationships. It’s about understanding where different people are coming from.”

Malliotakis said it was important to repeal the SALT cap but took a swipe of New York and New York City tax hikes.

“This is something that we can do here in Washington to provide relief for middle class families that we represent. But we urge the local and state — local municipalities and states to hold the line on taxes,” Malliotakis said.

A Suozzi-led letter to congressional leaders on Tuesday, signed by 17 of 19 Democrats in New York’s House delegation, warned, “we will not hesitate to oppose any tax legislation that does not fully restore the SALT deduction.”

On Thursday, Ocasio-Cortez told a reporter on Capitol Hill that she doesn’t think the SALT cap needs to be lifted as a condition for passing the infrastructure bill.

“I don’t think we should be holding the infrastructure package hostage for a 100-percent repeal of SALT, especially in the case of a full repeal. Personally, I can’t stress how much that I believe that is a giveaway to the rich,” Ocasio-Cortez said.

“The average real property tax bill on my block on Long Island is around $15,000 a year,” Garbarino said Thursday.

“I don’t live in a big house. I live in a nice small comfortable house, just like everybody else does on my block. Across the street from me lives a teacher, to the left of me lives a police officer. They all have high tax bills, but they don’t make a lot of money. They need our help.”

“This is something that’s more real-life than just about anything that’s in the paper every day. This is like money in people’s pockets,” he said.

nypost.com - 6 months ago
WASHINGTON – The US Supreme Court, with its newly expanded conservative majority, is set on Wednesday to hear a dispute over the city of Philadelphia’s refusal to place children for foster care with a Catholic Church-affiliated agency that prohibits
Read More

nypost.com - 3 months ago
A New Jersey police chief “clawed” across a frozen New Jersey river Thursday to rescue a 2-year-old girl and her mother who had fallen through the ice. Elmwood Park Police Chief Michael Foligno jumped into action after hearing a 37-year-old woman and her
Read More

nypost.com - 1 month ago
Creating the Big 3 has made the Nets the top destination in the buyout market. First it was Blake Griffin. And Saturday it was LaMarcus Aldridge. While traditional center Andre Drummond is still out there talking with the Lakers, the Celtics and possibly
Read More