Real-life Rapunzel Nilanshi Patel, who set the Guinness World Record for the longest hair on a teenager, has had her locks lopped off in favor of a shorter do.
Author: Jane Ridley
Published: 2021-04-15 07:23 pm 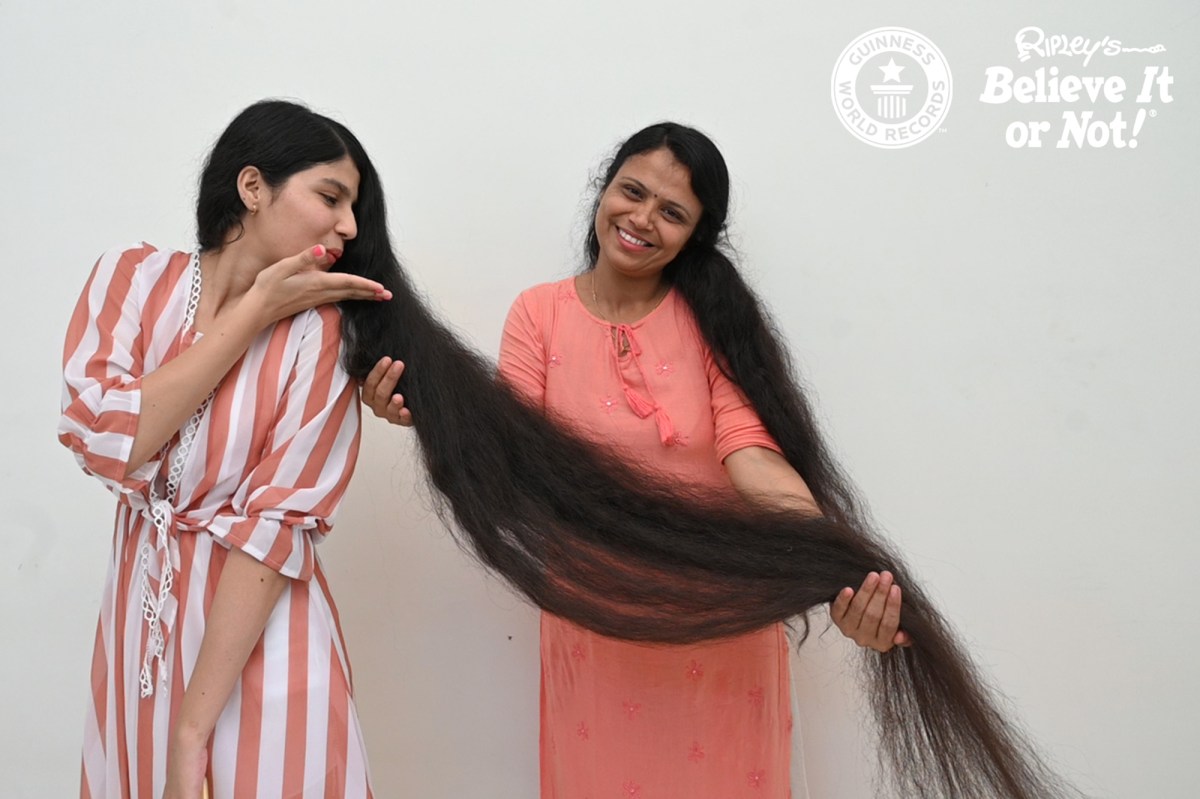 Real-life Rapunzel Nilanshi Patel, who set the Guinness World Record for the longest hair on a teenager, has had her locks lopped off in favor of a shorter do.

The 18-year-old, whose mane extended to a whopping 6 feet, 7 inches long, looked in the mirror after the dramatic chop and declared: “It’s amazing! I look like a little princess!”

Now Patel is donating her shorn tresses to the Ripley’s Believe It or Not! Museum in Hollywood, California.

Incredibly, the luscious locks weighed in at 9 pounds, 4 ounces.

“My hair gave me a lot,” said the teen from Modasa, in the Indian state of Gujarat, recalling how she had not had it cut since the age of 6.

But she added that she felt “proud” that it’s being shipped to America where “people will see and be inspired by my hair.”

Patel first set the Guinness record for longest hair on a teen when she was 16 and it measured 5 feet, 7 inches long. But she twice broke her own record, culminating in the last formal measuring in July 2020, just days before her 18th birthday, when her hair had grown to 6 feet, 7 inches long.

The reason she hadn’t visited the hairdressers since around 2008 was a “bad experience” involving a “horrible haircut.” She’d vowed not to allow scissors near her scalp again.

That all changed after a conversation with her mother, Kaminiben, when they discussed the possibility of the radical makeover.

At first, Patel considered either auctioning off or donating her hair — which she affectionately called her “lucky charm” — to make wigs for children with cancer. But Kaminiben convinced her it was so beautiful and precious, it should go on display “to inspire” others.

As part of the deal, the mom said she’d donate her own hair to the cancer wig program instead.

In an adorable before and after video doing the rounds on social media, Patel was somewhat apprehensive ahead of her date with the clippers.

“I’m so excited and a little bit nervous because I don’t know how I’m looking in the new hairstyle,” she said. “So let’s see what happens, but I hope it’s going to be amazing.”

The footage shows her kissing her hair goodbye, telling it: “I love you,” “thank you” and crossing her fingers. Next, the hairdresser, who, with the assistance of Kaminiben, secured portions of the hair in bunches, sheared through the bulky strands.

Since her old look had been a huge part of her identity, Patel winced as she heard the blades go to work.

She was only allowed to see the final result once the hairdresser had refined his trim, dried the style with a blow dryer and used tongs.

Patel’s emotional mother led her blindfolded daughter to a mirror for the big reveal.

“Oh my god, look at this!” the young woman said, jumping up and down with joy and delighted by her reflection. “I can’t believe it!”

She repeatedly hugged and kissed Kaminiben before leaving the house to show off the bob. It’s similar to the do famously modeled by French actress Audrey Tautou in the 2001 Oscar-nominated movie “Amélie.”

“Today is a new beginning,” concluded the teen.

nypost.com - 5 months ago
The UK could be weeks ahead of the United States when it comes to approving a COVID-19 vaccine, according to a new report. Regulators in the United Kingdom could green-light Pfizer and BioNTech’s vaccine this week, the Telegraph reported. Government
Read More

nypost.com - 3 months ago
Moderna is developing a COVID-19 vaccine booster to fight off the more contagious strain of the virus first identified in South Africa.
Read More

nypost.com - 8 months ago
Nineteen black families have purchased almost 100 acres of land in Georgia in hopes of founding a city where they can be safe, CNN has reported. The city will be named, simply, “Freedom.” “I’m hoping that it will be a thriving safe haven for people of
Read More

nypost.com - 5 months ago
Thousands of President Trump’s most devoted Georgia followers gathered Saturday to cheer his first rally since Election Day — as the Peach State prepares for yet another election, a double runoff that has both of its Republican senators fighting for their
Read More
More News & Articles