Sen. Ron Johnson (R-WI) suggests President Joe Biden is attempting to "remake the demographics of America" with mass immigration policies that seek to pack as many foreign nationals into the United States as possible.
Author: John Binder
Published: 2021-04-16 06:06 pm 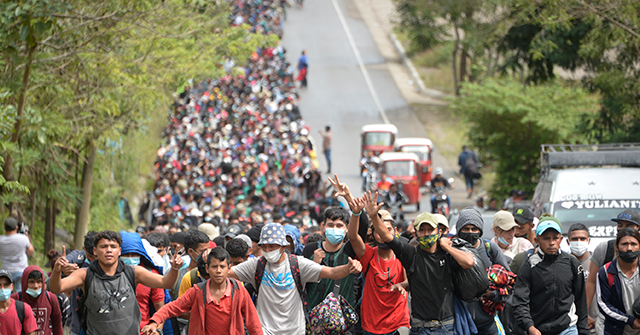 Sen. Ron Johnson (R-WI) suggested President Joe Biden is attempting to “remake the demographics of America” with mass immigration policies that seek to pack as many foreign nationals into the United States as possible.

In an interview with Fox Business Channel, Johnson said Vice President Kamala Harris, named by Biden as “crisis manager,” is aware of the surge of illegal immigration to the U.S. but is not working to stem the problem.

The reason, Johnson suggested, is the Biden administration’s goal of remaking the American electorate with foreign-born voters to secure a permanent political majority.

“[Kamala Harris] is awol and she was on my committee and we held something like 30 hearings on border insecurity … and problems with human trafficking,” Johnson said:

So she should be fully aware of this, she is fully aware of this and yet this administration wants complete open borders. And you have to ask yourself ‘Why?’ Is it really because they want to remake the demographics of America to ensure that they stay in power forever? Is that what’s happening here? Because the human depredations that are being caused by their policies are just untold. It’s completely unconscionable. [Emphasis added]

This week, Washington Post columnist Michele Norris admitted that the nation’s “demographic reshuffling” will “alter our culture, our politics, and who has the reins of power.”

This much is clear: The demographic reshuffling already underway will alter our culture, our politics and who has the reins of power. Much of the Republican agenda is fueled by a fear of this future. Corporations that want to embrace that future — and the wave of consumers it will bring — cannot continue to partner with a party that is only interested in representing the part of America it finds acceptable. [Emphasis added]

In his first months in office, Biden has implemented a series of executive actions that have ended border controls, gutted interior immigration enforcement, and dismantled former President Trump’s reforms to lower legal immigration levels to boost jobs and wages for Americans.

The Biden administration is acting on a number of fronts to reverse Trump-era restrictions on immigration to the United States. The steps include plans to boost refugee admissions, preserving deportation relief for unauthorized immigrants who came to the U.S. as children and not enforcing the ‘public charge’ rule that denies green cards to immigrants who might use public benefits like Medicaid.

Data over the last few election cycles have repeatedly shown the impact that a growing foreign-born voting population has in terms of electing Democrats over Republicans. In 2020, about 1-in-10 U.S. voters were born outside the country, the highest rate since 1970.

A significant increase in naturalization rates ahead of the 2022 midterms and the 2024 presidential election could deliver big gains for Democrats as margins in a number of swing states have been small over the last two presidential elections. In Pennsylvania, for example, Biden won the state by less than 81,000 votes.

The Washington Post, New York Times, the Atlantic, Axios, the Los Angeles Times, and the Wall Street Journal have all admitted that rapid demographic changes because of immigration are tilting the nation toward a permanent Democrat dominance.

“The single biggest threat to Republicans’ long-term viability is demographics,” Axios acknowledged last year. “The numbers simply do not lie … there’s not a single demographic megatrend that favors Republicans.”

Current legal immigration levels are expected to bring in 15 million new foreign-born voters by 2041. About eight million of those voters will have arrived entirely due to the process known as “chain migration” whereby newly naturalized citizens can bring an unlimited number of foreign relatives to the U.S.

John Binder is a reporter for Breitbart News. Email him at jbinder@breitbart.com. Follow him on Twitter here.

www.breitbart.com - 4 months ago
Scientists don't know if the coronavirus's new variant will worsen the pandemic as L.A. officials believe it is already fueling infections.
Read More

GOP Sen. Cramer: It's 'Past Time to Start a Transition' to Biden Administration

www.breitbart.com - 6 months ago
Senator Kevin Cramer (R-ND) said on NBC's "Meet the Press" that it was "past time" to begin the transition to a Joe Biden administration.
Read More

Charles Hurt: Georgia Election 'Is All About Divided Government'

www.breitbart.com - 4 months ago
Georgia's runoff elections for the Peach State's seats in U.S. Senate are "all about divided government," declared Charles Hurt, Washington Times opinion editor, Breitbart News columnist, and author of Still Winning: Why America Went All In on Donald
Read More