Rays get best revenge for past Yankees beanings: ‘Win games’

The Yankees hit the Rays again. The Rays punched the Yankees in the mouth. The ongoing beanball war between the rivals mostly paused Friday and the fight never got started because the Rays did exactly what they promised to do before the game on the way to
Author: Ryan Dunleavy
Published: 2021-04-17 03:45 am 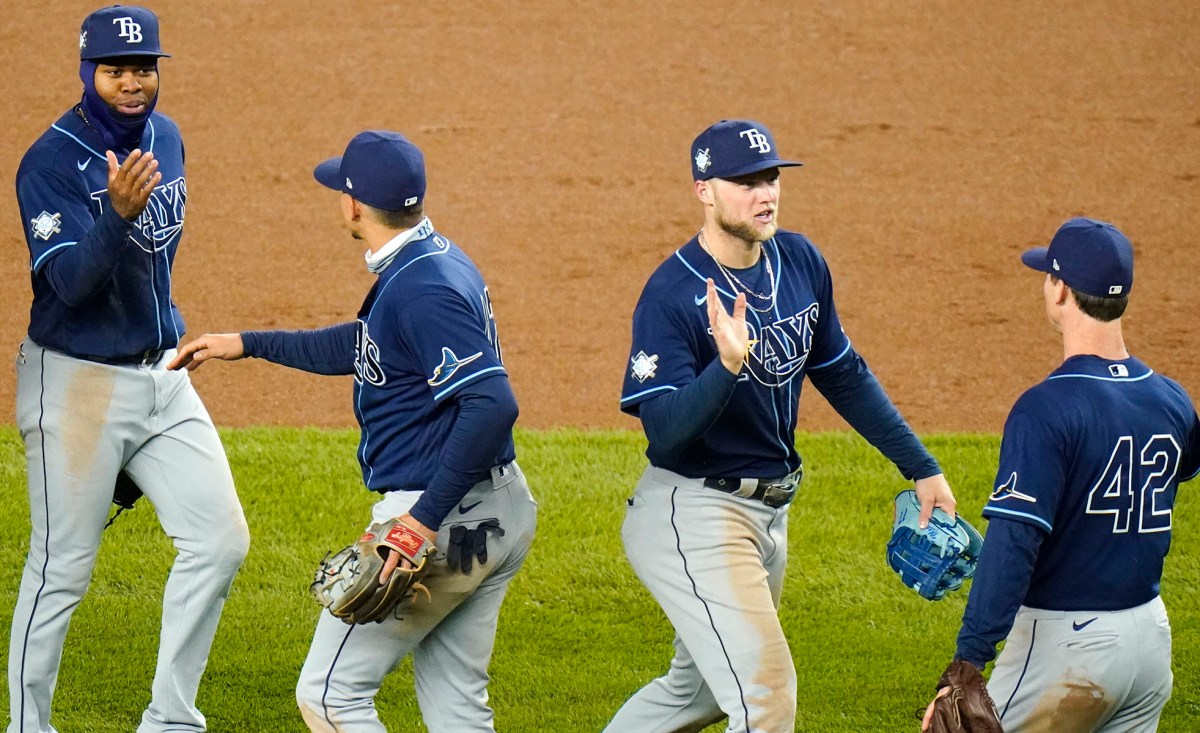 The Yankees hit the Rays again.

The Rays punched the Yankees in the mouth.

The ongoing beanball war between the rivals mostly paused Friday and the fight never got started because the Rays did exactly what they promised to do before the game on the way to an 8-2 victory at Yankee Stadium.

“The way we always handle things is on the field,” shortstop Willy Adames said. “We came here to do what we do best: Win games.”

When the teams met last weekend in St. Peterburg, Fla., Yankees pitchers hit four batters while the Rays hit one. Frustrations ran high after the Rays won two of three in the series and that was supposed to set the stage for a tense mid-April rematch.

Instead, the Rays’ bats did the talking Friday and journeyman Michael Wacha turned back the clock to 2015 by throwing strikes, not message-pitches.

“Our guys are pros. I thought the focus needed to be, ‘Let’s find a way to win a ball game,’ ” manager Kevin Cash said. “It’s been a frustrating couple days. So to come in here, against a good team, with their fans that were animated, I thought we handled things really, really well. Very encouraged with that.”

The only hit batsman on either side seemed unintentional. With the Yankees trailing 2-0, Michael King drilled Brandon Lowe leading off the top of the third. Lowe was stranded at third base, but what was the concern level that one would plunking would escalate into another?

“It happened. I’m past it. It’s done,” Lowe said. “I really don’t see [winning] as retaliation. We’re going to come out and do our thing. If they hit us, the trend has been going the way it’s been going. Everyone has been writing about it, talking about it. We’re showing up every day to the ballpark to win a game.”

Yankees manager Aaron Boone was hoping for an end — at least temporarily — to the bad blood. That wish was granted. His other was not.

“I hope it’s two really good teams fighting, that are going to be fighting in this division throughout the season,” Boone said. “And I don’t mean [fist] fighting. Fighting it out on the field — baseball that is. I hope it’s two good teams playing quality baseball against each other. I expect, or hope, nothing goes on beyond that.”

The final four innings were ugly: The Rays extended their lead to 6-0 in the fifth and 8-0 in the sixth, setting up plenty of meaningless at-bats for a pitch to “accidentally” slip away and communicate retaliation without regard for a run scoring. The game briefly was delayed in the bottom of the eight when the limited-capacity crowd threw baseballs on the field to show their displeasure.

“The game dictates what you are going to do,” Adames said. “Obviously, if something happens, every action has a reaction. Whatever happens in the game, we are not planning anything.”

“I’m excited about [hearing Yankees fans again],” he added. “They are kind of hard sometimes, but you like that.”

There’s only one thing that’s hard for the Rays to do against the Yankees right now: Get out of the way of the baseball.

nypost.com - 6 months ago
A Colorado wildfire forced hundreds of people to evacuate as it exploded to more than six times its size overnight Thursday, according to officials. The suitably named East Troublesome Fire had spread over 19,000 acres late Wednesday — but by Thursday
Read More

nypost.com - 6 months ago
Former Mayor Rudy Giuliani walked into court on Tuesday to handle his first federal case in almost three decades as he took over the Trump campaign challenge to Joe Biden’s projected victory in Pennsylvania. Giuliani, Trump’s personal lawyer and a former
Read More

nypost.com - 2 months ago
Nearly half of Americans age 65 and older have gotten their first dose of the coronavirus vaccine, the White House said Friday. “In the time since the president has taken office, we’ve now doubled the pace of vaccinations and are rapidly on our way to
Read More

nypost.com - 7 months ago
In its more than 100 years of watchmaking, Rolex has supported almost every form of art, with philanthropic programs in architecture, dance, film, literature, music, theater and the visual arts. But the most forward-thinking of them all may be the Rolex
Read More
More News & Articles