‘By the Time We Reached Main Street, I Had Lost Sight of Him ’

Commuting from Queens to Manhattan, neglected at the library and more reader tales of New York City in this week’s Metropolitan Diary.
Author:
Published: 2021-04-18 03:00 am 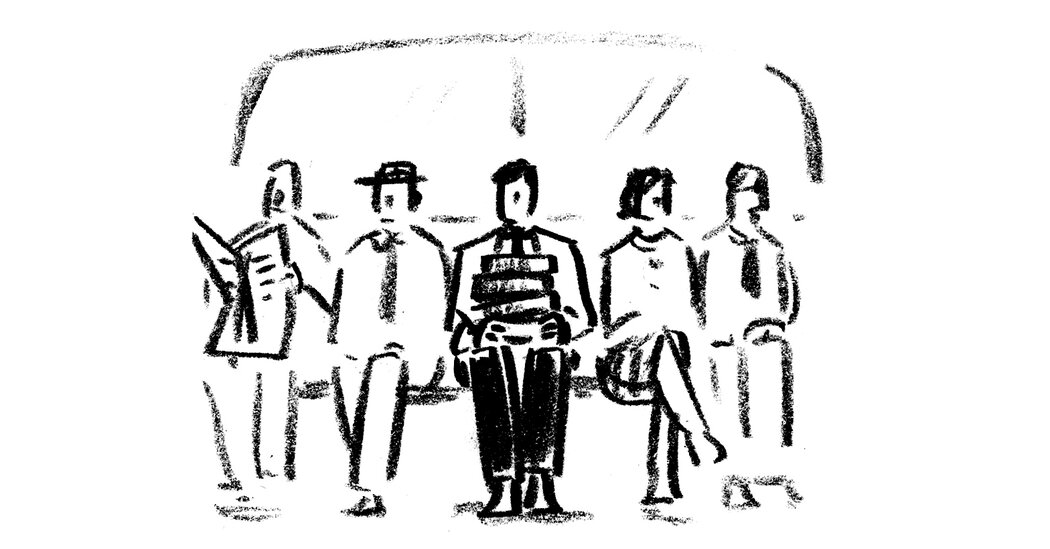 In fall 1969, I was a college freshman commuting from Bayside into Manhattan via bus and subway.

On one particular September morning, as I took my usual seat on the Q13, I noticed an attractive yet unfamiliar man sitting at the back of the bus and wrestling with an armload of textbooks.

The bus filled up quickly, and by the time we reached Main Street, I had lost sight of him — until he ended up sitting directly across from me on the No. 7.

We exchanged a bit of awkward eye contact, then made an obvious attempt to avoid it, as if to dispel any glimmer of a mutual attraction.

Later that afternoon, as I was heading home from class, a bit of fate intervened and he and I wound up on the same subway car again.

When he emerged from the station and walked toward the back of the line for the bus, I leaned in and tapped his arm as he passed by me.

“Are you following me?” I asked.

He shook his head, smiled and laughed. By the time we got off the bus together, that attractive yet unfamiliar man was unfamiliar to me no more.

I pity the poor encyclopedia,
Dreary and dingy and dusty.
Does anyone here want to readeeya?
Long ago you were tried, true and trusty.

Every woman and child and manica,
Once pored through your pages, perused
The treasures inside old Britannica,
Now unwanted, unloved and unused.

Can’t they see you’re enticing, enjoy’ble?
Will they fondle your pages once more?
Why is wanting attention a foible,
When you’ve knowledge and info galore?

There you sit on the shelves; you’re a martyr,
And ignorant louts should be warned:
No one here among us is smarter,
Than the mighty tomes that they’ve scorned.

I pity the poor encyclopedia,
Suff’ring a silent malaise,
Sexy screens and seductive new media
That’s what’s on the menu these days.

My boyfriend and I broke up not long ago. Within days, I was in a new apartment.

Unpacking has been hard. With each box I find relics of a life that’s been tangled together like headphones in your pocket.

One morning, a friend and I went for a walk in Central Park. I told him I was feeling low and numb and generally terrible. He said that in early January he had found himself sitting at his desk crying from a feeling he couldn’t pin down.

By the time we got back to my stoop, we were both a bit of a mess, clearly fragile and talking in sentences that were not fully formed.

On the second floor of my new building there is a single balcony. Every morning, I see a middle-age woman perched there, with a beret and a cigarette. She is new to the building, too.

On this particular morning we had said hello. Now, I went inside quickly.

About an hour later, I heard a knock on my door. When I opened it, I found a plate of chocolate chip cookies arranged around a bowl of raspberries.

“Welcome #5!” said the note, with a peace sign and a Fariha Roísín poem attached. “From the girls in #3.”

For the first time in weeks, I breathed.

When I was a teenager growing up in the Morris Park section of the Bronx in the 1970s, there were many nights when my friends and I would trek into “the city” to go to concerts at the Garden or in Central Park.

Invariably, the trip home at the end of our night out would land us back in the Bronx in the wee hours.

Knowing that the bakery across from the church there would be baking bread before dawn, we would knock on the screen door in the back.

One of the guys would come out and give us a few loaves of “Italian” and a block of butter to share.

I don’t remember all of the music that I heard on those wild nights, but I do remember sitting on the curb under a streetlight and eating hot bread and butter before heading home.

It was the early days of the iPod and mine had just broken.

I took it to the Apple store on Fifth Avenue. Using the vocabulary of a third grader, I tried to explain to a man at the “genius bar” what was wrong with it.

He took my device to the back of the store and then returned with it a short while later.

“I found your problem,” he said. “You have way too much Ace of Base on this.”

Read all recent entries and our submissions guidelines. Reach us via email diary@nytimes.com or follow @NYTMetro on Twitter.

As Europe’s Coronavirus Cases Rise, So Do Voices Crying Hoax

www.nytimes.com - 1 year ago
As health officials warn of a second major wave, growing numbers of people are dismissing the threat as media hype and sometimes embracing conspiracy theories.
Read More

www.nytimes.com - 1 year ago
An award-winning magazine may have reached the end after Laurene Powell Jobs’s Emerson Collective, a major media player, severed ties with its parent company.
Read More

www.nytimes.com - 3 months ago
The new timeline is not a radical shift from previous assessments, but reflects the reality that the Taliban have a limited ability to control the borders of Afghanistan.
Read More
More News & Articles