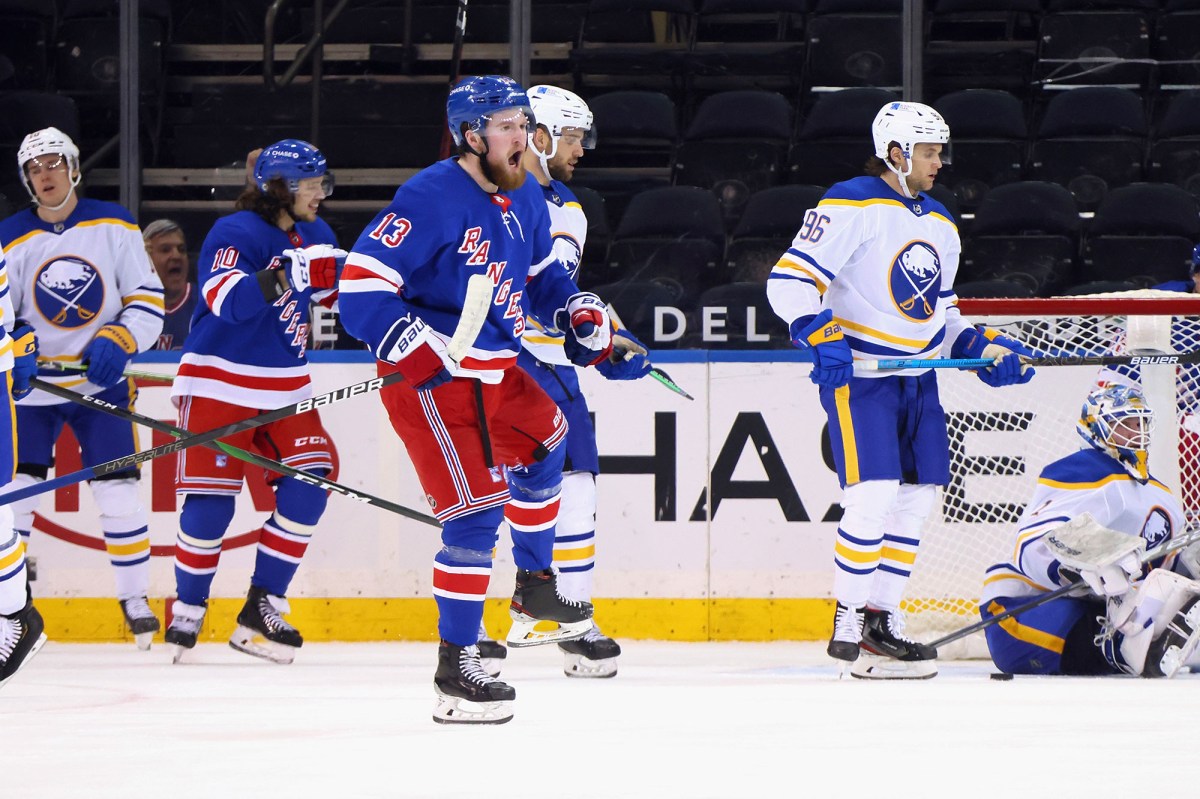 Alexis Lafreniere scored the tie-breaking goal with 10:11 left in regulation, and the New York Rangers picked up their third straight win, 3-1 over the visiting Buffalo Sabres on Tuesday night.

With the game tied at 1-1 and just after Buffalo’s Drake Caggiula couldn’t direct the puck into an open net behind Rangers netminder Igor Shesterkin (36 saves), Lafreniere delivered. Taking a behind-the-net pass from Ryan Strome (two assists), the 2020 overall No. 1 draft pick drilled the puck from the high slot past Buffalo’s Ukko-Pekka Luukkonen, who otherwise had a solid night while stopping 38 shots in his second NHL contest.

Defenseman Brendan Smith also scored and Mika Zibanejad added a late insurance goal for the Rangers (26-18-6, 58 points), who beat Buffalo for the second time in three nights, are 11-3-2 since late March and have won nine of their last 11 at home. New York, though, is still four points behind Boston for the fourth and final playoff spot in the East Division.

Sam Reinhart increased his team-leading goal total to 22 with his 14th on the road this season for the Sabres, who have dropped five of their last seven. Buffalo (13-30-7, 33 points) lost all four road meetings against the Rangers this season.

Buffalo recorded the game’s first six shots on goal and outshot the Rangers 16-6 during a scoreless first period. However, it was New York that finally opened scoring off a Sabres’ turnover just 2:22 into the second period.

Sabers rookie Dylan Cozens tried to clear the puck from behind his own net, but it went right on to the stick of Smith, who successfully converted on a slap shot to match a career high with his fifth goal of the season. That was one of 20 shots the Rangers put on net in the middle frame.

But it was Reinhart who equalized the contest off his shot from the slot via a Casey Mittelstadt pass on the power play with just 4 seconds left in the second.

New York finished 6-1-1 against the Sabres this season.

nypost.com - 1 year ago
They got out of the house — and into the sack. Condom sales in the UK surged following the end of a national lockdown to limit the spread of COVID-19, reports said Tuesday. Durex saw more than a 10 percent jump in sales over the summer, after pandemic
Read More

nypost.com - 1 year ago
Other tactics detailed in Clara Kraebber's notes include wearing "casual attire" before changing into black at the scene of a protest and monitoring police radio frequencies, law-enforcement sources said.
Read More

nypost.com - 2 months ago
Kids in some city schools are still eating lunch outdoors each day due to social distancing rules despite plunging temperatures and steamed parents.
Read More

nypost.com - 1 year ago
A rapping NYPD officer whose lyrics about trigger-happy white cops snowballed into a discrimination lawsuit against the department feels more empowered than ever to speak out against racism, she said — and claims her white colleagues now support her
Read More
More News & Articles