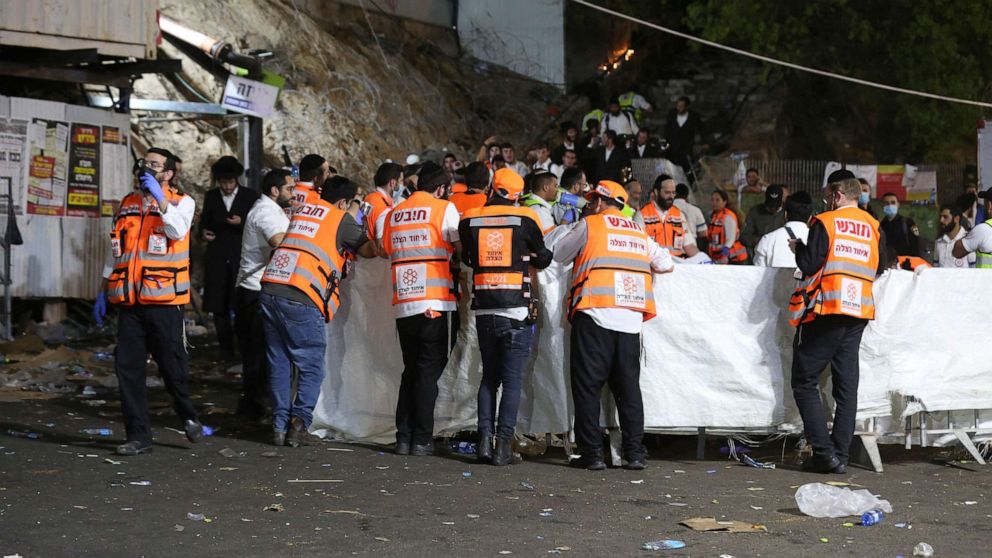 Dozens have been killed and many more injured in a stampede late Thursday in Israel at Mount Meron during Lag BaOmer festivities.

Magen Daviv Adom, Israel's national emergency medical services, said there were "dozens" killed, but did not offer specific numbers. It also said in a tweet that that 38 were critically inured and still at the location, six were in critical condition at a hospital, 18 were severely injured, two were moderately injured and 39 were lightly injured.

Video from the scene showed dozens of ambulances lined up for patients.

The Israeli military said it sent helicopters to aid in rescue efforts.

The MDA confirmed six helicopters were sent to work with ambulances to bring victims to Ziv Hospital in Safed and Galil Medical Center in Nahariya.

Lag BaOmer is an annual celebration on the anniversary of the death of Rabbi Shimon bar Yochai, who was buried in a tomb at Mount Meron in northern Israel. The festivities include pilgrimages to bar Yochai's tomb and lighting bonfires and celebrating throughout the night.

This is a developing story. Check back for updates.

Unidentified woman's body discovered in a ditch in Houston suburb

abcnews.go.com - 9 months ago
The body of an unidentified woman has been discovered in a ditch in a Houston suburb and authorities are trying to piece together who she was and how she died.
Read More

abcnews.go.com - 9 months ago
Mexican President Andrés Manuel López Obrador has stepped up a campaign of interfering with the nation's courts, which have sometimes blocked his policies
Read More

abcnews.go.com - 1 year ago
Former Vice President Joe Biden is not ruling out the possibility of instituting a federal mask mandate if elected in November.
Read More
More News & Articles