The Hoolies and the 900s have been warring over a slice of Bedford-Stuyvesant since at least 2018, leaving behind a trail of bodies, bullets and terrorized bystanders.
Author: Larry Celona, Tamar Lapin
Published: 2021-05-06 08:46 pm 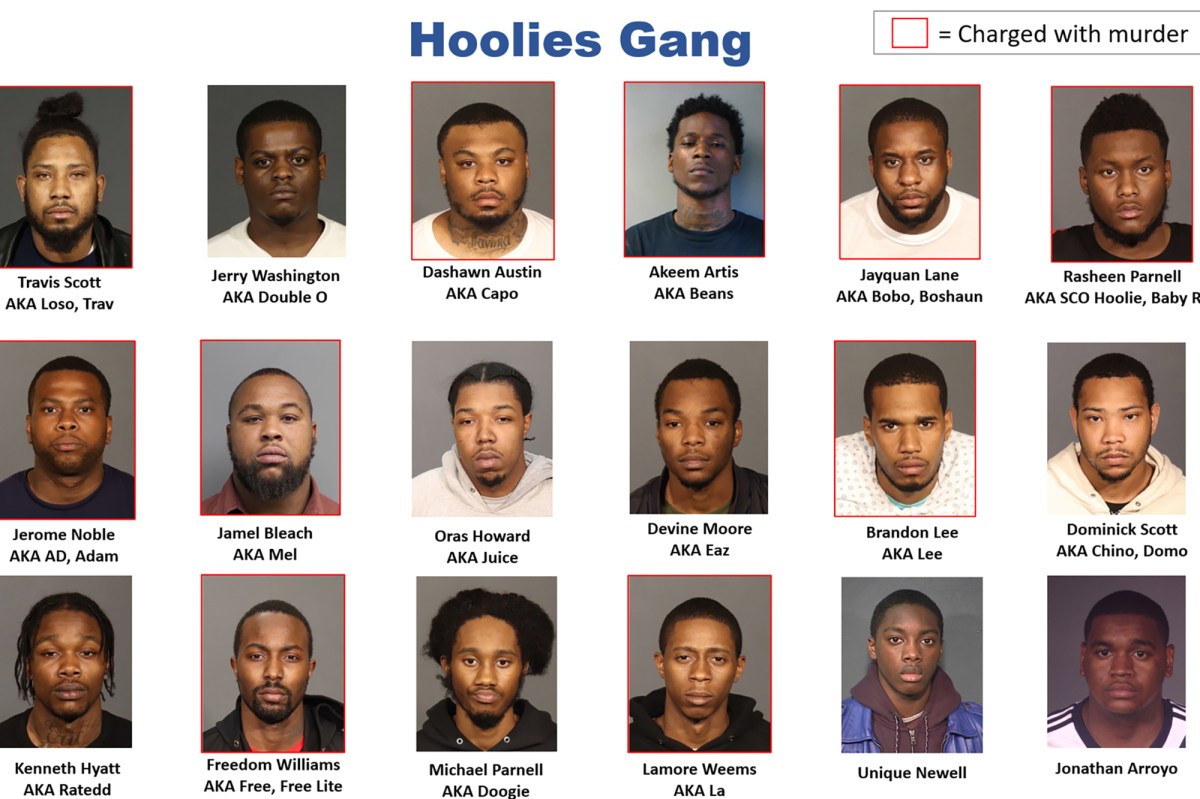 The Hoolies and the 900s — the rival Brooklyn gangs whose bloody feud resulted in the slaying of 1-year-old Davell Gardner — have been warring over a slice of Bedford-Stuyvesant since at least 2018, leaving behind a trail of bodies, bullets and terrorized bystanders.

“This is the type of gun violence that has made people fearful to leave their homes,” Brooklyn District Attorney Eric Gonzalez said Thursday, as he announced charges against 18 alleged Hoolies, including two for the tot’s death.

The Hoolies is made up of under 100 members, some affiliated with branches of the Blood, Crips and Folk street gangs, and headquartered at NYCHA’s Roosevelt Houses in Bed-Stuy, according to prosecutors and law enforcement sources.

However, “their reach is far beyond these housing developments,” Gonzalez said.

The 900 gang, also an umbrella group made up of various affiliated crews, is based out of the nearby Sumner and Tompkins housing developments and deals in robberies, shootings and credit card scams, according to sources. Nineteen alleged members were charged in January.

“Their hatred for each other goes beyond rivals,” said a law enforcement source. “If one gang member saw someone from the other gang on street, he wouldn’t hesitate to shoot him. They just keep shooting and killing each other.”

The savage beef stemmed in part from a December 2018 incident where 900 members “infiltrated” rival territory and began shooting, killing a Hoolies member and wounding another man, Gonzalez said. That sparked a series of retaliatory shootings.

The turf war was fueled by posts on Facebook and Instagram, where the gang members boasted about their crimes, according to prosecutors. In music videos on YouTube, they allegedly used song lyrics to reference acts of violence or rivalries with other crews.

Some 900 members also adopted the names of famous basketball players, including “Shaq” and “Kobe,” to signify their status as shooters, according to court documents.

A big break in the Hoolies case came after investigators obtained messages from the encrypted messaging app Telegram, that members allegedly used to coordinate attacks on their rivals.

The men charged from both gangs range in age from 16 to 33. By the time little Davell was killed by a stray bullet in July, authorities had been looking into their violent rivalry for more than a year.

“Fortunately, as a result of today’s indictment, these men are off the street,” Gonzalez said Thursday. “Today is an important victory for the people of Brooklyn, especially for the residents of Bedford-Stuyvesant.”

nypost.com - 6 months ago
Todd Bowles doesn’t sound in much of a hurry to take another shot at being an NFL head coach. After losing his job with the Jets, he’s spent the last two years as the Buccaneers defensive coordinator and has keyed their turnaround this season. And while
Read More

nypost.com - 9 months ago
Two Los Angeles County Sheriffs officers were clinging to life after they were ambushed and shot point-blank through their patrol car window late Saturday. A lone gunman walked up to the parked patrol car in the southern LA County city of Compton and
Read More

nypost.com - 6 months ago
CHICAGO — Chicago Blackhawks captain Jonathan Toews will miss the start of training camp because of an illness, and there is no timetable for his return. The 32-year-old Toews said Tuesday he has been experiencing symptoms that have left him feeling
Read More
More News & Articles