Why would the Knicks change now?

We are well past the point where anything the Knicks do should surprise us.
Author: Mike Vaccaro
Published: 2021-05-09 09:50 pm 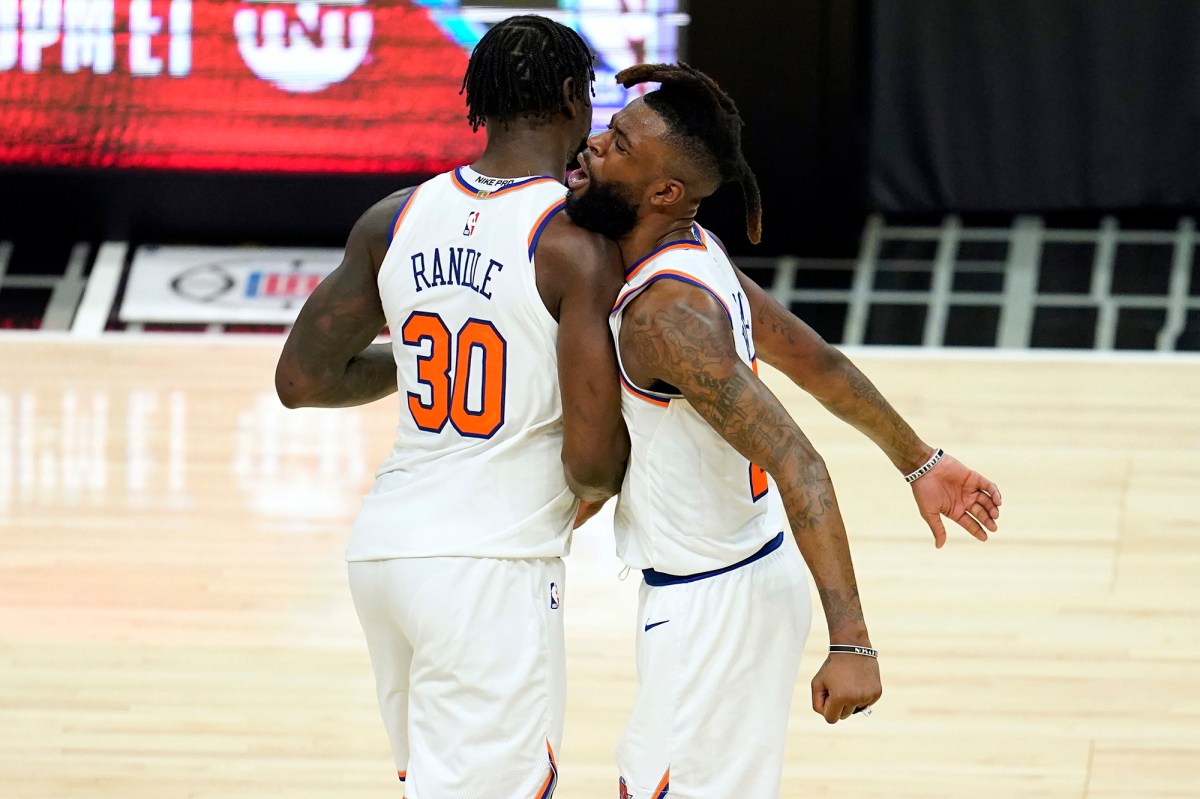 We are well past the point where anything the Knicks do should surprise us, because they long ago stopped surprising themselves. Whatever doubts, whatever questions they may have had about themselves at the start, or during any of the low moments and losing streaks, those are over. Those are gone. Those are dead.

“We feel,” Julius Randle said, “like we can beat anybody.”

Sunday they beat the Clippers, 106-100. If it isn’t the crown-jewel win of the season, it’s sure in the conversation — on the road, on national TV, against a hot team featuring both its stars, following a two-game tour through the Denver-Phoenix woodshed. And here’s the best part of the way they reacted to it:

Just another game. Just another win. Just another chapter in this 72-part serial that may alternately surprise and stun just about everyone else around them but seems like just another day at the office to the guys in the uniforms.

They are now two wins (or a win and a Boston loss) away from officially finishing in the Eastern Conference Top 6 and avoiding the dreaded play-in round (which in some NBA circles months ago was derisively dubbed the “Knicks Invitational” when it seemed that was the only way they’d squeeze in a postseason game).

They remain in fourth position in the East with four games to go, with a fair chance, still, to earn home-court advantage in the first round of the main playoff draw.

Neither of these things would have seemed possible, or plausible, back in December. And yet here they are, at the doorstep now, after knocking off one of the genuine favorites to make it out of the West, after beating Kawhi Leonard and Paul George and — cherry on top of a stack of cherries on top of the sundae — beating them every which way but loose during the essential portion of Sunday’s fourth quarter.

“We think about it,” Derrick Rose said of the Knicks’ inching closer to some unfathomable regular-season accomplishments. “But we know we’re not finished with what we want to accomplish. We want to keep this going.”

The irony of Sunday’s win is that the bedrock upon which this magic-carpet ride has been built — Julius Randle pouring in 30 or 35 points whenever needed — was absent this time. Randle scored only 14, although six of them came thanks to three king-sized baskets down the stretch, when the Knicks finished the Clippers off once and for all.

Still, even as he languished through a 7-for-19 (0-for-4 from 3) shooting quagmire, it was Randle’s struggles which highlighted in bright, yellow ink just how far along this team has come. The Knicks seized control of the game in spite of Randle, not because of him, and that’s not something they could even have imagined not long ago.

Instead they turned to Rose (25 points, eight assists, 32 brilliant minutes) and workhorse RJ Barrett (18 points, seven rebounds, four assists, 45(!) minutes) and Reggie Bullock, who had five 3s and 24 points and a plus-15 rating across 46(!!) minutes. It wasn’t just encouraging to see others step up because Randle’s output was muted; it was emboldening because this is exactly what teams are going to do to the Knicks in the playoffs — run multiple defenders at Randle, make him uncomfortable, dare someone else to beat them.

Sunday, just about all of Randle’s teammates volunteered for the job.

“The game tells you who gets the shots,” Knicks coach Tom Thibodeau said. “You’re responsible to make the right read and find the right guy.”

Said Randle: “The beauty of our team is that at any given moment anyone can step up.”

The deeper beauty is in the belief they bring to every game now, even after getting drilled in Denver and drubbed in Phoenix. Alec Burks and Immanuel Quickley weren’t available for this one. Mitchell Robinson is still sidelined. There is nobody outside the traveling party who looked at this six-game road swing west — even in the middle of the winning streak that immediately preceded it — and saw 3-2 through five (with a likely depleted Lakers team awaiting them Tuesday night).

But the traveling party did. The Knicks, in fact, would almost certainly tell you they should be 4-1, that they sabotaged themselves Friday night in Arizona. That is who they are. That is what they’ve become. When there were zero expectations attached to them, they had their own. When those prospects were upgraded to “modest,” they demanded more.

“Don’t change now,” Thibodeau said. “This is what we’ve done all year.”

Rose called it “running through the finish line,” which is a preferred Thibodeau expression. The Knicks are running there. They’re sprinting there. Let everyone else empty the thesaurus looking for ways to explain it; they’re where they’ve believed they should be all along. Why change now?

nypost.com - 2 months ago
DAKAR – Ireland’s government confirmed on Wednesday that an Irish citizen, wildlife NGO founder Rory Young, was killed by unidentified gunmen along with two Spanish journalists in an ambush in Burkina Faso this week. The three foreigners and a member of
Read More

nypost.com - 2 months ago
The state of California is easing up on its coronavirus restrictions in just under two weeks as indoor concerts, performances and events will be allowed to resume April 15. The announcement was made Friday in an online news release, which explained that i
Read More

nypost.com - 8 months ago
A 13-year-old Georgia boy was gunned down in his front yard by a masked gunman who said nothing in the apparently random and “senseless” shooting, relatives and police said. Brayan Zavala, of Riverdale in Clayton County, was working on a lawn mower with
Read More
More News & Articles