Why you should learn Mental Health First Aid

One in five adults in the US lives with a mental health problem according to the National Institute of Mental Health, but most don't seek out professional help. That's where Mental Health First Aid - an eight-hour workshop - hopes to fill the gap.
Author:
Published: 2019-06-24 01:49 pm 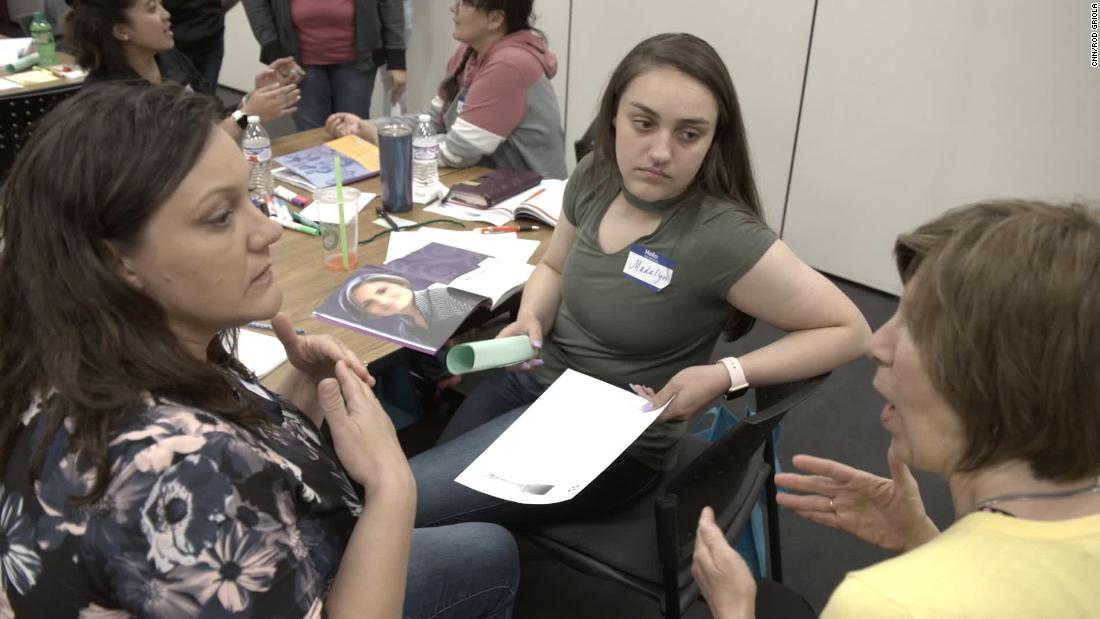 (CNN)One in five adults in the US lives with a mental health problem according to the National Institute of Mental Health, but most don't seek out professional help. That's where Mental Health First Aid - an eight-hour workshop - hopes to fill the gap.

The class trains citizens how to recognize the signs and symptoms of various mental illnesses -- from depression to anxiety disorder and substance abuse disorder.

Participants also learn how to listen non judgmentally and de-escalate in crisis situations. In addition, they receive a list of mental health and substance abuse resources.

"It's really not common sense to know exactly what to say, and how to say it. And that's what mental health first aid does," says Betsy Schwartz, who oversees the Mental Health First Aid program at the National Council for Behavioral Health.

The program began in the United States 12 years ago and has been growing in popularity with nearly 2 million Americans trained nationwide. They include teachers, paramedics, human resource managers, clergy and everyday citizens hoping to help if needed.

"Mental health first aid training is literally for anyone and everyone," says Schwartz.

The US government passed an act in 2015 that allocated $20 million for the program; it's free in most communities.

It's not a replacement for professional therapy. It's just like giving CPR to someone before the medics come.

Only 40% of people with a mental health problem actually seek out help. That is why, Schwartz says, this class is so vital.

"When we are struggling, we may not know where to turn for help. We may not feel comfortable being willing to ask for help."

Ohio fights back against suicide

CNN recently attended a Mental Health First Aid workshop in Defiance, Ohio, a part of the state that struggles with a high rate of addiction issues and suicide.

"Ohio, since 1999, has had a 30% increase in suicide deaths and is above the national average for suicide rates," says Karen VonDeylen, a social worker with the Maumee Valley Guidance Center and an instructor for Mental Health First Aid.

"So it's really important that we're getting information in people's hands. They're not easy conversations to have and oftentimes people shy away from that."

VonDeylen says the popularity of the class exploded this year, with 20 workshops offered since last summer.

"I think a lot of it is word of mouth," says VonDeylen.

Learning the signs and symptoms of mental health problems

The instructors pointed out some signs and symptoms for each mental health issue.

For depression, the physical signs include lack of energy, sleeping too much or too little, overeating or loss of appetite, headaches, unexplained aches and pains. The behavioral signs are crying spells, withdrawal from others, loss of motivation and slow movement.

"We're noticing somebody that's usually well kept and put together. We're noticing a decline in their hygiene that could be a really good indicator that something's going on," BJ Horner told the class. Horner is one of the instructors for Mental Health First Aid and is a prevention specialist for Maumee County Guidance Center.

Class participants were shown how to calm someone going through a panic attack by having them focus on a particular color or sound to calm their racing thoughts. By focusing on the five senses, it "gets them to focus attention on something other than what they're panicked about."

They reenacted a woman having a panic attack, pacing back and forth. The person helping them mimicked their movements but walked more slowly.

Then she said, "pretend I have some flowers in my hand- I want you to smell those flowers." This forces people to breathe through their nose, which slows down their breathing rate.

The class also took part in an exercise -- mimicking what it may be like to experience a psychotic episode, particularly when someone is hearing voices.

The lesson here: Don't tell someone they aren't experiencing something when for them it's true.

"Even if it's not real to us, it is to them. And we need to remember that," Horner told the class.

"We're not training anyone to be a professional. We're only teaching people how to be an empathetic friend, family member or coworker," said Schwartz.

A big takeaway from the workshop is learning the acronym ALGEE, a road map of how to react when someone is really struggling.

"A" stands for "assess for risk of harm or suicide." The trainers say asking if someone is thinking of harming themselves is actually a big life saver.

You should listen, not interrupt, and really try to hear what they're saying without judgment. That makes the person really feel heard and safe, says Horner.

"This is their story and they need to talk. Our judgment can't come into play. If it does, we're not going to be the one they're willing to talk to anymore."

"G" is for "give information and reassurance." Each student gets a list of mental health and addiction resources for their community that can be given out to those in need.

"E" is for "encourage professional help if needed.

"It's going to be very important to have some buy-in into their own recovery," Horner tells the class. "We all like to be able to say 'I did this'. Get them involved in those decision making skills."

Losing a brother to suicide

"I was very uninformed. I was one of those people who said 'get over it. Pull up your bootstraps and go on.'"

She also has family members who suffer from depression, anxiety and bipolar disorder.

"Every day in life you forget to listen and be aware," Oyer told CNN.

"Everybody is struggling with something. When somebody says something -- listen," Oyer says. "If you're uncomfortable, taking this class will help you become more confident in reaching out to somebody."

HR manager sought out training after a tragedy

Tina Bost works with 200 employees in her job as the HR manager for an automotive parts supplier company outside of Toledo, Ohio. Many of those employees are dealing with aging issues: dementia, depression and even psychosis.

She took the class last February after an interaction with an employee she now realizes was likely suffering from bipolar disorder and experiencing psychosis.

"I'd worked with her more than 25 years and did not know. I heard she was going through things. Staring off into space, giving strange answers," Bost tells CNN.

"There was an incident where she threatened another employee. I go talk to her and it was like that never happened, like I was out of my mind."

During a phone conversation, the woman was talking about "transport communicators," says Bost.

"I started to get irritated. She had missed a whole lot of work." The woman got off the call and "we lost her for days," Bost recalls.

She showed up days later in bad shape -- the police were called and in the end she got psychiatric help.

"I wouldn't have argued with her delusion. That's one of the things they teach you. Don't tell them it's not happening."

"I would've kept her on the phone until I got some help to her house."

Another case ended in tragedy. A new employee showed up to work on heroin -- "staring off into space" while working.

"She voluntarily quit because she did not want to take the drug test."

"I probably would've tried to get her some help. At that time, I was freaked out. I didn't really know what to do," said Bost. "You kind of just want it to go away. Instead of trying to help her."

A week after taking the Mental Health First Aid class, Bost had another chance to intervene and save a life.

She met with an employee who had missed work a few times. She recalls asking,

"Do you think you're depressed? Are you down? I noticed you've missed some work. "

"He started to well up with tears and said 'Sometimes I don't want to get out of bed. I guess maybe I'm depressed or something.'"

Bost asked if if he had been thinking about suicide -- something, she says, she would never have asked anybody in the past.

His answer was yes. Then she asked if he was at the point where he was planning it.

"He said no and I knew there wasn't an immediate emergency."

Bost says the employee is in counseling now and taking antidepressants. "He seems to be doing much better."

"Before I never went that far (with questioning)."

CORRECTION: This story has been updated to correct Tina Bost's recollections of situations involving two employees.

To find a class in your area, go to mentalhealthfirstaid.org. Click on "Find a class" and put in any zip code or city. You will find a list of all the classes and certified instructors in your area. The majority of classes are free through government grants and funds from the non-profit National Council for Behavioral Health.

www.cnn.com - 8 months ago
According to a new book by President Trump's former attorney, Michael Cohen, Trump's disdain for Obama was so extreme that he hired a "Faux-Bama" to participate in a video in which Trump belittled the former president and then fired him. CNN's Brian
Read More

www.cnn.com - 3 months ago
Local officials and teachers unions are at odds across the country over when is the right time to resume in-class learning, nearly a year after the coronavirus pandemic put an end to normal life for millions of kids and their parents.
Read More

For 17 months, a man allegedly poisoned his co-worker's food and water

www.cnn.com - 2 years ago
A female engineer at a Bay Area consulting firm says she suffered months of"immediate and significant health problems"after consuming food and drinks she had left at work -- and she believes they were poisoned by a colleague, according to police.
Read More

www.cnn.com - 3 months ago
President Joe Biden said at the start of his administration that family conflicts of interest would not be tolerated in his White House, but not two weeks into his presidency, his brother's actions as a part of his employment at a law firm in Florida are
Read More
More News & Articles