Aaron Donald is the monster in the middle, a terrifying force of nature who can single-handedly wreck the game in a way Lawrence Taylor would appreciate, and it is Daniel Jones who enters the belly of the beast Sunday at SoFi Stadium. Jones’ 16th NFL star
Author: Steve Serby
Published: 2020-10-03 03:00 pm 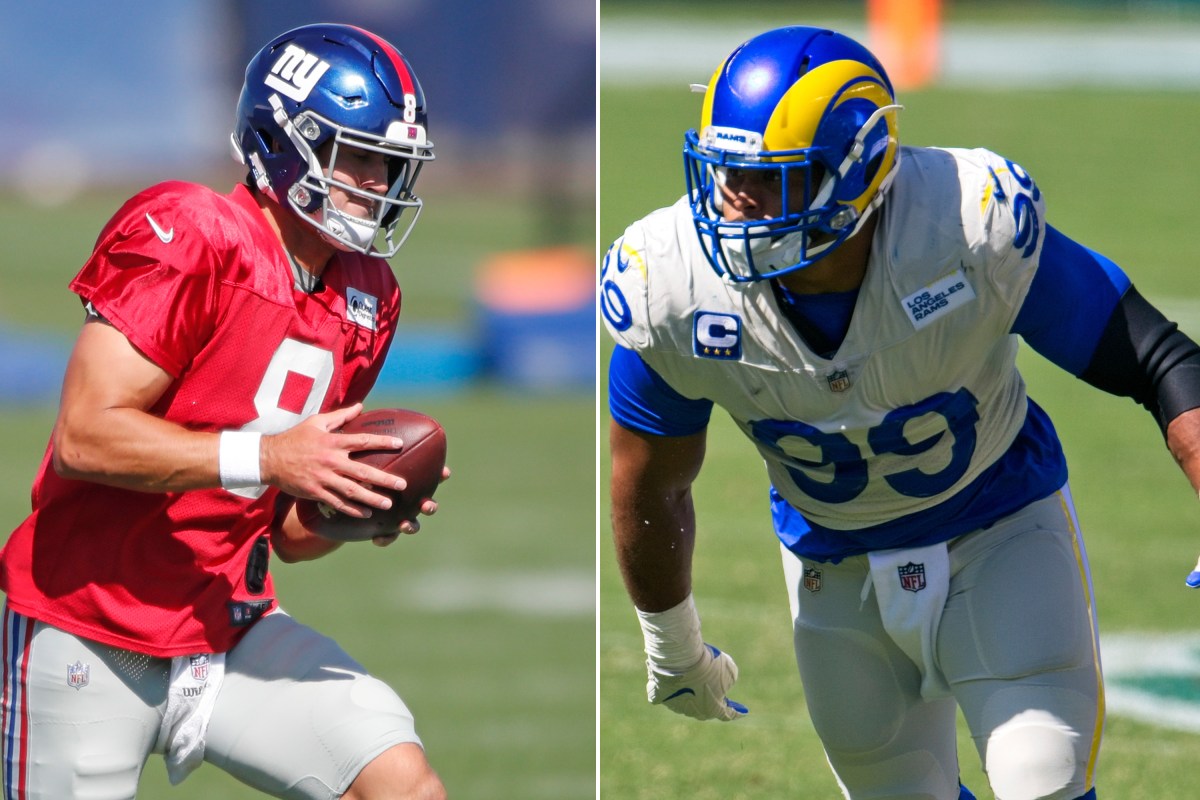 Aaron Donald is the monster in the middle, a terrifying force of nature who can single-handedly wreck the game in a way Lawrence Taylor would appreciate, and it is Daniel Jones who enters the belly of the beast Sunday at SoFi Stadium.

Jones’ 16th NFL start comes at a time when he has no semblance of a running game around him unless he is taking off and running himself, a turnover problem he has yet to cure, a novice center in Nick Gates and a high-octane Sean McVay-Jared Goff offense that could force him into a shootout against his will … with Donald breathing down his neck and looking to ragdoll him.

No one could have envisioned Donald becoming this kind of Superman defensive tackle/end when he was at Penn Hills High School in Pittsburgh. Even after a storied career at his hometown University of Pittsburgh, even after 12 sacks and 28.5 tackles for loss as a senior, even after running a 4.68 40-yard dash at the combine and benching 225 pounds 35 times, Donald was bypassed by the Giants with the 12th pick in the 2014 draft, although they had lost nose tackle Linval Joseph to the Vikings in free agency, in favor of Odell Beckham Jr. The Rams, picking 13th, grabbed Donald.

Donald — at 6-foot-1, 285 pounds — didn’t fit the Giants’ profile, and general manager Jerry Reese and coach Tom Coughlin craved an elite playmaker for Eli Manning. Beckham was considered pro-ready and versatile enough to also contribute as a punt and kickoff returner. And Beckham wowed the Giants with his combine interview.

Unfortunately for Jones, he never got the chance to throw to Beckham, and instead gets thrown to the biggest, baddest wolf in the land. The best defensive player in the NFL.

“No. 1, he does things you don’t coach,” Fox Sports analyst Dave Wannstedt told The Post. “His God-given instinct to know and feel where the ball’s at … this guy can be going full speed one direction, and he feels, he sees and diagnoses if the ball is going the other way, then he can change directions like a linebacker can. Anybody that says they’re gonna coach him to do that stuff, I’d like to sit down and talk with ’em a little bit.”

Wannstedt recruited Donald when he was the head coach at Pitt from 2005-10.

“Because of his size, he wasn’t your prototype, five-star recruit that everybody around the country was coming in for,” Wannstedt said. “But I have and had such a great rapport with high school coaches in western Pennsylvania, that as I was talking to other coaches, multiple times, they would ask me, ‘Have you seen the kid at Penn Hills High School?’ And I said, ‘No, I heard of him, I haven’t seen him play.’ Around the high school coaching circles, everybody knew how the guy dominated.

“So once we started recruiting him and I saw the tape … and I have a history with guys that are not 6-4. I had Russell Maryland at the University of Miami, who was 5-11, 6-foot. … Chris Zorich, who’s 5-11, 6-foot, and he played for me here at the Bears, a Notre Dame kid. So, in our scheme, the undersized defensive lineman that had quickness, could definitely play.

“I made the home visit, met his mom and dad, and the more I got to know the kid, and everybody at the school loved him, and met with the superintendent on down at the school, we knew we wanted him.”

Wannstedt recalled telling a young Donald that he planned on red-shirting him his freshman year.

“Well, after one week of practice, the defensive line coach grabbed me and said, ‘We gotta look at this tape close. Aaron’s making as many plays as anybody we got. We gotta play this kid this year.’ So we played him as a true freshman,” Wannstedt said.

Wannstedt only coached Donald for one year, because he left to become an assistant head coach for the Bills.

“The thing that separates Aaron right now is he is what I would call a playmaker,” Wannstedt said. “There’s only two or three of ’em in the league — Akiem Hicks [Bears] and Fletcher Cox [Eagles] — that I would say are playmakers at their position.”

Donald (three sacks this season, 75 career sacks) has a relentless motor, rare explosiveness and leverage, and knows every trick in the book. He has drawn comparisons to former Vikings Hall of Famer John Randle (137.5 sacks).

“Aaron can get to the quarterback and rush the passer, as well as he can split a double-team and diagnose a running play,” Wannstedt said.

Or, as Bill Belichick said before Super Bowl LIII against the Rams: “He’s pretty much unblockable.”

Or as Giants offensive coordinator Jason Garrett said: “He’s just one of those rare, unique players.”

Bills QB Josh Allen, with a better supporting cast and more experience than Jones, threw for four TDs and ran for another last Sunday in the Bills’ 35-32 victory over the Rams. Donald registered two sacks — one of which was a strip-sack fumble recovery — with three tackles for losses.

The plan for Daniel Jones will go something like this: Get rid of the ball quickly, run for your life if you don’t.

“We certainly need to be aware of where he is,” Jones said.

No one more than him.

nypost.com - 2 months ago
There is “zero chance” Tiger Woods will play in this year’s Masters tournament — and he is likely facing lengthy physical therapy and more surgeries on his shattered leg before he even thinks about even walking again, several medical experts told The Post
Read More

KKK member who drove through BLM protest gets prison time

nypost.com - 3 months ago
An avowed Ku Klux Klan member was sentenced to nearly four years in prison for driving through a crowd of Black Lives Matter protesters during a demonstration last summer in Virginia. Harry Rogers, 37, struck at least two people with his blue Chevrolet
Read More

nypost.com - 3 months ago
Steve Jobs passed away nearly 10 years ago, but according to his former executive assistant Naz Beheshti, aspiring tech titans are still curious about the lifestyle the enigmatic inventor adopted to build Apple.
Read More