The ’90s sitcom starring Fran Drescher has caused a sartorial sensation since all six seasons arrived on HBO Max. It is also, the writer argues, a delightful show that unlike some of its contemporaries, still feels fresh.
Author: Hilarie Ashton
Published: 2021-05-14 11:00 am 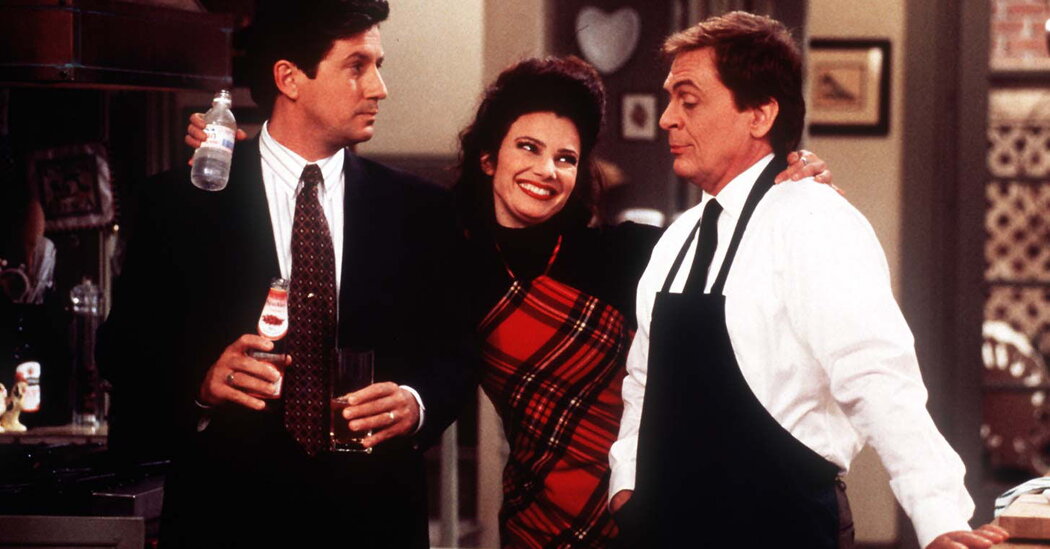 It has, as they say — and as the Instagram account whatfranwore’s 330,000 followers attest — been a bit of a thing.

“The Nanny,” a multicamera CBS sitcom that ran from 1993 to 1999, tells the story of Fran Fine, a former beauty shop attendant from Flushing with a sharp Queens accent, who, while selling makeup on the Upper East Side, accidentally becomes the primary caregiver for a millionaire Broadway producer’s three children. (The theme song announces that story from the jump, and the show regularly references it in sometimes cute, sometimes clunky dialogue.)

I was a little worried that it wouldn’t fully hold up, like so many of its comedic sitcom contemporaries centered on white New Yorkers, or that its abundant of-the-moment cultural references would make it feel dated. But it turns out I didn’t need to. “The Nanny” remains, cheerful, winking and an easy balm for a painful year.

“The Nanny” comforts me because:

As developed and played by the series’s star, Fran Drescher, the “nanny named Fran,” as the theme song trills, is ebullient, brave and soothing. Firmly in line with the warmth and intelligence of her fellow sitcom-anchoring stars Brett Butler and Reba McEntire, Drescher embodies an unforgettable heroine. In some ways an inheritor of Maria von Trapp’s work-to-marriage plotline from “The Sound of Music,” Fran is a “fish out of water” figure who is so winsome that the stuffy widower father (Charles Shaughnessy) begins to fall for her, although Fran is freer to assert herself with humor and sass than Julie Andrews’s Maria was. Fran manages to be uncompromising in what matters to her while never losing the audience’s empathy.

Fran is in friendly, quiet collaboration with almost everyone else on the show: namely, the children, in their lovably awkward efforts to become their own selves, and the butler, Niles (Daniel Davis), in his forever campaign against Mr. Sheffield’s miserably-framed business associate, C.C. Babcock (Lauren Lane). Sometimes arch in response to C.C.’s broadly drawn bitterness, Fran is rarely meanspirited. Niles, for his part, is too witty for us to root against; he glories in his spite, and C.C. lobs it back.

In direct contrast to her boss’ stuffiness, Fran is consistently down to earth. She buys things on sale, gets into scrapes and jokes about bodies and their foibles. And she’s ahead of anyone who might mock her loud fashion, her nasal voice, her class background or even her Judaism: Drescher has her character get to all of those jokes before almost anyone else does. She often plays to the camera with mock quizzical looks, gently poking fun at the show’s world of particularly rarefied privilege.

Drescher perfects her own version of Lucille Ball’s elastic facial expressions and deftly executed pratfalls, as when Fran sinks to the floor after tasting wasabi (a wordless comedic triumph) or when, disguised as a candy striper, she is asked to shave her boss’s undercarriage. But through all the slapstick, Fran is also the ethical heart of the show, remaining refreshingly real in her screwball ways.

Fran’s fashion is as wackily unforgettable as her hair is big. Bold colors, loud patterns and unapologetically sexy styling mark almost every outfit Drescher wears. (As the Instagram account Fran Fine Fashion Database currently chronicles, a lot of it was designer). Such wholehearted embracing of high femme makeup and tight clothing didn’t meet most ’90s standards of feminism, but it certainly fits into a more 21st century approach: She wears what she wants how she wants it, no matter what anyone says.

In some ways, Fran’s aesthetic recalls that of her compadre Peg Bundy of Fox’s “Married … With Children” (1987-1997), who shares Fran’s affinity for big, half-bouffant hair and skintight leopard print. But their respective sitcoms treated them very differently: Peg was often mocked, framed uncharitably as a ditz. Fran gets to own most witty moments, and neither the skimpiness nor the tightness of her clothes limits the way she is treated.

And the show wittily subverts traditional gender politics more often than it upholds them, particularly each time she sparkles out a winsome correction to Mr. Sheffield — even Andrews’s Maria didn’t often get to do that. (And Niles is the home’s true domestic laborer; the show routinely winks at the fact that Fran, though staunchly supportive of the children, doesn’t do much actual work.)

In the constant “will they, won’t they” sexual tension between Fran and Mr. Sheffield, she is often the aggressor, with lines like, “I heard moaning and screaming coming from your room and I figured … I should be part of it!” The show is both in on the jokes about gender trappings and totally in control of them — in part, I suspect, because Drescher was one of the creators (along with her then-husband, Peter Marc Jacobson).

Simply put, “The Nanny” is hilarious. It finds jokes everywhere, sometimes three or four to a line, and links them across episodes and plotlines. Fran is consistently self-deprecating (as is her naggingly loving mother, played by Renée Taylor), and there’s a lightness when even the most direct punch lines land. (I’m not sure why “Seinfeld” gets so much credit for establishing the shape of New York Jewish sitcom humor in the ’90s; Drescher was drawing on the same creative heritage, with shades of Henny Youngman and Joan Rivers, just a bit later.)

The show even manages the tricky feat of nodding at what were then current events while still feeling fresh. (Even Roger Clinton, the former half brother of Bill Clinton, made an appearance.) Many of the flashy guest stars lampoon themselves: Elizabeth Taylor makes divorce jokes; Lamb Chop, the enduring sock puppet voiced by the ventriloquist Shari Lewis, openly hits on Mr. Sheffield.

The Nanny’s wit, warmth, and — yes — flair make wonderful company in a springtime when New Yorkers are returning, at different speeds, to our prepandemic activities. It turns out that Fran is more than a comfort — she’s also a model for reimagining a life you thought you had all worked out, with extra points for color, verve, and laughter.

www.nytimes.com - 11 months ago
Pro-democracy politicians, who had hoped to ride widespread discontent to big gains in the fall, saw the yearlong delay as an attempt to thwart their momentum.
Read More

www.nytimes.com - 3 months ago
Virginia Commonwealth was bounced from the men’s basketball tournament after what its coach described as “multiple positive tests.”
Read More

www.nytimes.com - 3 months ago
The U.S. president could persuade President Andrés Manuel López Obrador that common values make good neighbors, more so if they are partners and friends.
Read More

www.nytimes.com - 1 month ago
The case hit a nerve for Australians, who consider the footwear a national, if unfashionable, symbol. But the brand’s owner in the United States had mounted a legal challenge against the idea that “ugg” is a generic term.
Read More
More News & Articles