A Black softball player says she was forced to cut off her hair beads at a game. Her family wants to change the rule they say is discriminatory

It was her last home softball game of the season, and Nicole Pyles, a sophomore at Durham Hillside High School in North Carolina, had just hit a double. Her hair, braided with beads and tied in a bun at the bottom of her neck, was the last thing on her
Author:
Published: 2021-05-14 09:38 pm 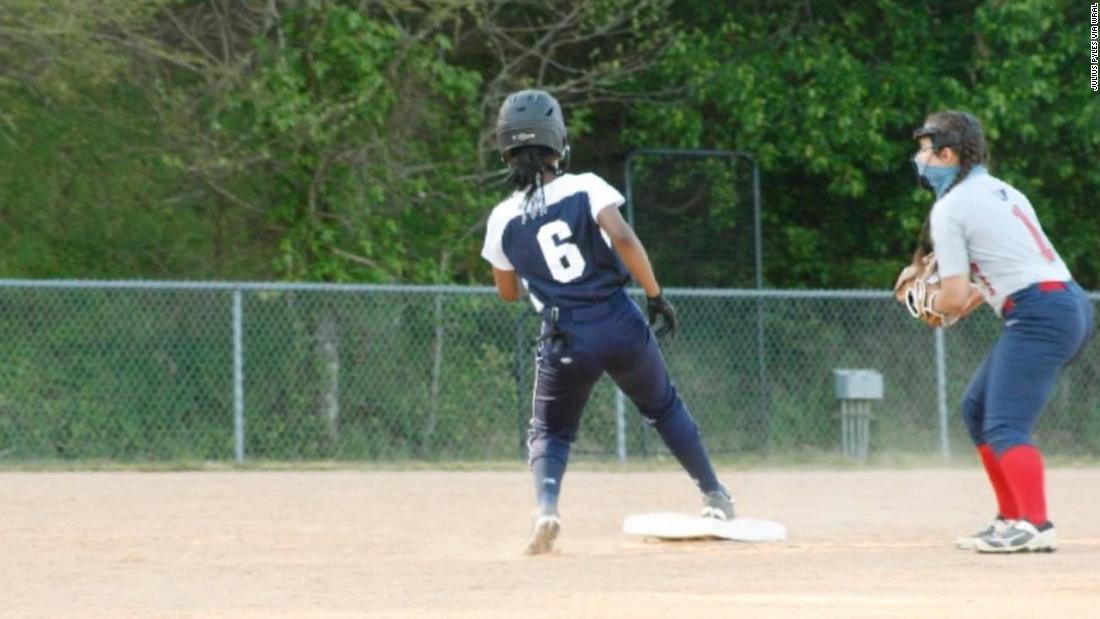 (CNN)It was her last home softball game of the season, and Nicole Pyles, a sophomore at Durham Hillside High School in North Carolina, had just hit a double. Her hair, braided with beads and tied in a bun at the bottom of her neck, was the last thing on her mind.

It quickly, however, became a focal point of the April 19 game. First, a coach on the opposing team claimed they couldn't see her jersey number, Pyles said. Pyles, 16, said she tucked the braids into her sports bra and continued playing. But then, later that same inning, it came up again.

A coach on the opposing team pointed out the beads to the umpire, Pyles said. Beads in hair, according to the rulebook, weren't permitted. So despite playing four prior games with the beads, the umpire gave Pyles a choice: Either take the beads out, or don't play.

So Pyles' said her teammates gathered around, attempting to take the beads out of the hair. Because they were wound so tightly, they had to cut some of the hair out in order to remove all the beads, Pyles said.

Now, Pyles' family is attempting to get the rule changed.

"Everyone's hiding behind the rules of the game," Julius Pyles, Pyles' father, told CNN. "If there was a rule, it should've been applied in the beginning, (not in) their last game."

Pyles' experience is a familiar one.

In one of the most famous examples, a Black high school wrestler in New Jersey was forced to cut his dreadlocks off in order to compete in a tournament, after being told his hair wasn't in compliance with league regulations.

In 2020, another Black high school student was told that if he didn't cut his dreadlocks to comply with the district's dress code, he wouldn't be able to walk at graduation. And there have been similar incidents all across the country.

Julius Pyles says he has reached out to multiple people with Durham Public Schools and the North Carolina High School Athletic Association. Though DPS has publicly supported Pyles, the NCHSAA has not.

"Durham Public Schools supports our students' right to free expression and opposes unreasonable or biased restrictions on Black women's hairstyles," the district said in a statement Wednesday, regarding the April game. "We believe the blanket ban on hair beads is culturally biased and problematic. We support our student, Nicole Pyles, and believe this rule should be amended."

The district went on to encourage the NCHSAA and the National Federation of State High School Associations (NFHS), of which NCHSAA is a member and thus dictating rules across North Carolina high school sports, to review the policy, calling it "culturally biased and inappropriate."

Rule may be addressed next month, national organization says

But Commissioner Que Tucker, of the NCHSAA, stated that the rule is "not new."

"When the violation was noticed by an umpire, the proper determination of illegal equipment was verified as supported by NFHS Rule," she said in a statement to CNN. "Further, according to NFHS Softball Rule 3-5-1, prior to the start of a contest, it is the responsibility of each coach to verify to the plate umpire that all his or her players are legally equipped, and that players and equipment are in compliance with all NFHS rules."

Tucker called the experience "truly unfortunate," but said the coach's duty is to ensure players are aware of the rules before playing.

The rule regarding beads in hair was first enacted in 2012, according to Karissa Niehoff, executive director of the NFHS. It was instituted to "minimize the risk of injury" to athletes during competition, the organization said.

Though the NFHS did not say if the rule would be amended, Niehoff did say the NFHS Softball Rules Committee will "address hair beads and other adornments at its annual meeting next month."

The rule as it stands, though, is discriminatory, Julius Pyles said.

"It's 2021, and now my child is being a part of something that should be dead and gone. I didn't serve this country to then be discriminated against," said Julius Pyles, a veteran.

Durham, one of the largest cities in North Carolina, has already adopted an ordinance that bans hair discrimination in the workplace, inspired by the CROWN Act, a bill moving through the state legislature that would make hair discrimination illegal. And though Durham Public Schools supported the resolution, it only applies to places of employment.

www.cnn.com - 5 days ago
A second man has been charged in the shooting last month of Black Lives Matter activist Sasha Johnson, the London Metropolitan Police said in a statement Saturday.
Read More

www.cnn.com - 6 months ago
North Carolina Gov. Roy Cooper granted pardons Thursday to five men convicted of crimes they did not commit, including one freed this year after serving 44 years on a wrongful rape conviction.
Read More

www.cnn.com - 7 months ago
A sweater made famous by Princess Diana has been reissued by the designers, four decades after she sported the bold red knit, which features dozens of white sheep and one black sheep on the front.
Read More

www.cnn.com - 9 years ago
HLN's Dr. Drew admits to having a "mild mental health issue" when it comes to an...
Read More
More News & Articles