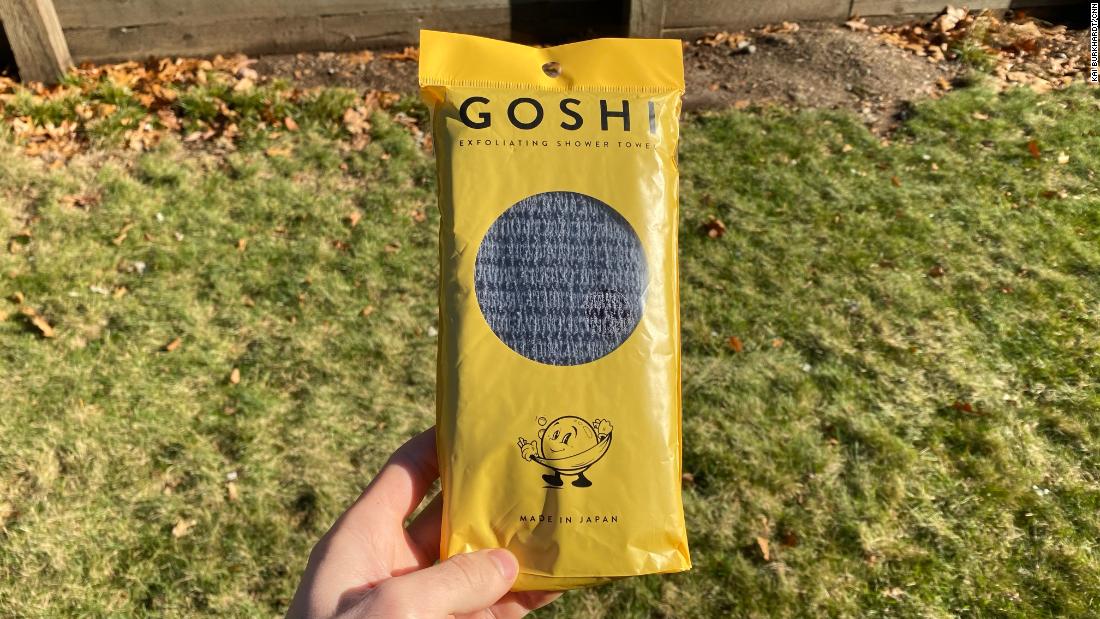 If you want to focus on your health and pamper yourself in the new year, start with something you do every day: showering. The Goshi Exfoliating Shower Towel is here to revolutionize your shower experience for just $15 a pop at Amazon. The towel boasts an exfoliating weave that claims to leave you feeling cleaner and more refreshed every time you step out of the shower.

Intrigued by the idea of adding a spa-like experience to my grooming routing, I threw out my loofah and got my own Goshi shower towel to try out — and it lived up to the hype.

The Goshi Exfoliating Shower Towel is made in Gunma, Japan, a prefecture that has a storied history as one of the world’s hubs for manufacturing high-quality textiles, especially silk. Goshi has enlisted some of Japan’s finest textile mills in this area to create its exfoliating wonder towel. Crafted with a subtle and contrasting weave, the towel is able to lather, exfoliate and scrub you clean, making a regular shower more luxurious.

The Goshi towel comes in a basic yellow package, which lists its simple instructions on the back. The first thing I noticed about the towel once I took it out of the package was its texture. It’s definitely not a plush, soft towel you’ll want to cuddle up with. The towel is thin — almost transparent — and its weave creates a texture that’s rough to the touch. The towel is also bigger than anticipated at almost 4 feet in length, though this turned out to be useful when it came to scrubbing hard-to-reach areas.

Using the towel in the shower is as easy as using any washcloth. All you have to do is wet the towel, fold it up a bit and add soap. I tried it with both liquid soap and bar soap, and the towel got nice and lathered up with both. Once the towel is soapy, just start scrubbing.

The rough texture feels almost like sandpaper, but in the absolute best way possible. I had the sensation of scrubbing away all the dirt and dead skin on my body, and while at first this was a tiny bit uncomfortable, I felt extremely clean and refreshed afterward, making the extra step in my shower routine completely worthwhile.

The packaging says to avoid using the towel on your face or other sensitive areas due to its rough texture, and I’d echo that sentiment. Also, if you have especially sensitive skin, this might not be the right towel for you. However, it is gentle enough to use every day, and after a handful of showers I got used to the feel of the towel. Now the roughness doesn’t bother me at all.

After use, just thoroughly rinse the Goshi and hang it so it can dry out. Knowing how gross loofahs can get, I was a little bummed to find you can’t throw it in the washing machine to give it a good clean, but you can always just hand-wash it in between showers if it needs a refresh.

These towels are meant to last at least three to six months, depending on how often you clean it and how hard you scrub, though Goshi’s website claims they can last up to a year (you should probably replace it before then anyway). I used mine for over a month, and it’s still good as new. There’s no visible wearing or tearing, nor are there any funky smells, as is often the case with an old loofah.

I was amazed at how much better a shower can feel after using the Goshi Exfoliating Shower Towel. My skin felt cleaner, softer and more refreshed after scrubbing with the Japanese wonder towel, and as long as you don’t have super-sensitive skin, you’ll love it too. For just $15 at Amazon, this little towel will completely change the way you look at showers.

www.cnn.com - 2 months ago
JPMorgan Chase CEO Jamie Dimon is bullish about the economy, but he remains concerned about the growing wealth gap, particularly for Black people, in the United States.
Read More

Woodward on Trump's handling of Covid-19: 'I've never seen anything like it'

Biden is willing to pare down size of Covid-19 bill