Joe Biden made the quip Tuesday from behind the wheel of the new F-150 Lightning electric pickup truck when a reporter asked if she could ask "a quick question on Israel ... since it's so important?"
Author: Lee Brown
Published: 2021-05-19 08:33 am 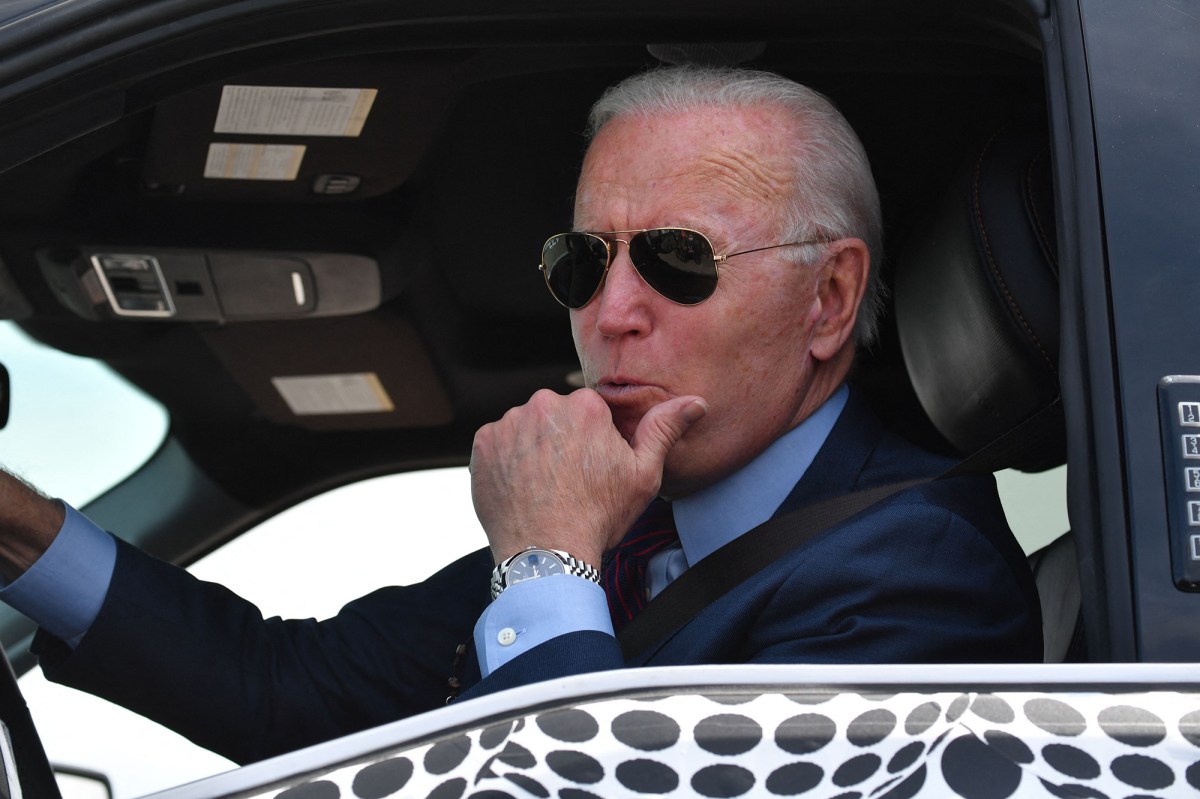 President Biden is being ripped for joking about running down a reporter rather than answer a question about the ongoing deadly conflict in Gaza.

Biden made the questionable quip Tuesday from behind the wheel of the new F-150 Lightning electric pickup truck when a reporter asked if she could ask “a quick question on Israel … since it’s so important?”

“No, you can’t,” Biden replied bluntly. “Not unless you get in front of the car as I step on it.”

The car-loving commander-in-chief insisted he was “only teasing” — but still raced away on a Michigan race track rather than accept a question on the ongoing conflict.

He was quickly ripped online, with many noting how his predecessor, President Trump, was routinely savaged for his own jokes.

Conservative podcast host Stephen L. Miller said that the muted media coverage of Biden’s quip was “a pretty good tell about just how performative the ‘how dare he’ fainting spells of the past 4 years actually were.”

“If President Trump had done this, he would have been impeached,” former Nevada GOP Chairwoman Amy Tarkanian tweeted.

“Jokingly or not, this rhetoric is completely unbecoming of the President,” added Tarkanian, now a political pundit.

She even reminded White House press secretary Jen Psaki of a recent tweet she sent about the “paramount responsibility” of “ensuring the safety and security of journalists” covering the conflict.

“Jen might want to remind her boss of this tweet as he’s talking casually about running reporters over with pickup trucks,” Tarkania wrote.

Many were equally as outraged at how desperate the president appeared in avoiding the most pressing international question of the day.

“While America’s most important Middle East ally is under attack, Joe Biden threatened to run over a reporter for asking a question about it,” National Republican Senatorial Committee campaign worker Jonathan Turcotte said, adding that media coverage focused on Biden’s excitement about driving the truck was “a joke.”

“Lot of things happened today, but worth revisiting the fact that Joe Biden was asked if he could answer a question about the Israel-Hamas conflict and his response was to say no, joke that he’d run the reporter over with a truck, and drive off,” conservative journalist Jerry Dunleavy said.

nypost.com - 12 months ago
Steffan Mouton allegedly gave alcohol to a group of quarantined girls enrolled in the National Guard Youth Challenge program before he pulled one of them into a bathroom and raped her.
Read More

nypost.com - 1 month ago
Ethan Reyes, an aspiring 14-year-old rapper who was stabbed to death, was remembered as a promising artist with "a million-dollar smile."
Read More

nypost.com - 10 months ago
The chemicals have been linked to several health problems and often do not break into the environment easily.
Read More

nypost.com - 3 months ago
The president praised law enforcement and first responders, adding that he and First Lady Jill Biden were praying for the victims and their families.
Read More
More News & Articles