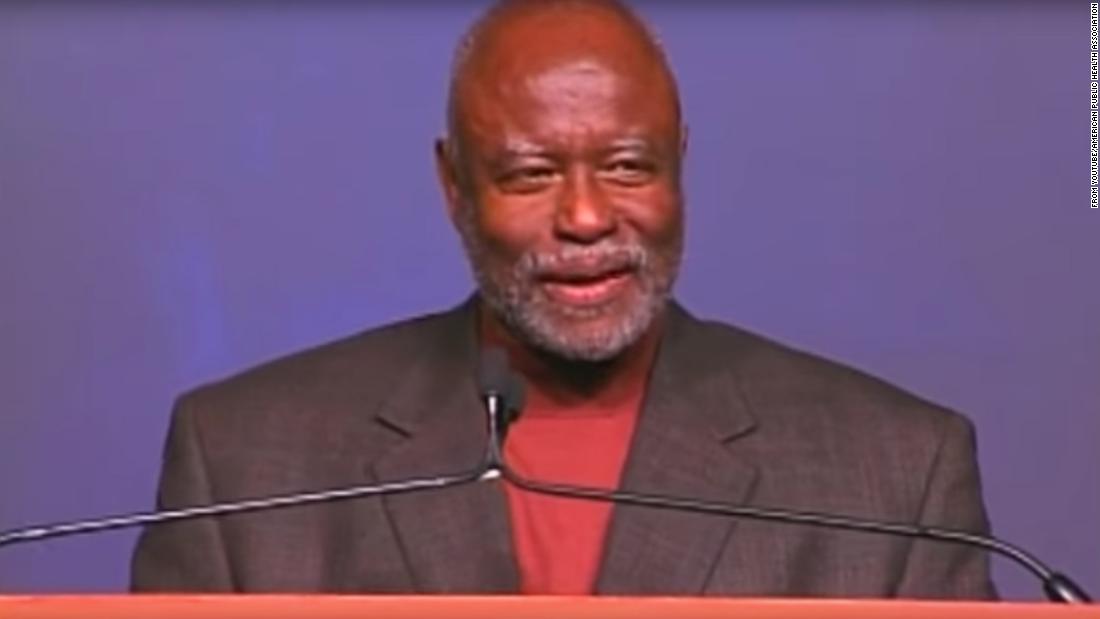 (CNN)Bill Jenkins had already started a promising career in public health in the mid-1960s when he learned about one of the darkest chapters in American medical history: the Tuskegee syphilis experiment.

Jenkins, an epidemiologist, played a significant role in exposing the experiment to the public and he funneled his outrage over the racism at the root of the Tuskegee study into a lifelong effort to reduce racial disparities and discrimination in health care.

He died on February 17 in Charleston, South Carolina, at age 73. His death was confirmed by the Morehouse School of Medicine, where he worked for many years.

How the study began

Jenkins noted that the infamous study actually grew out of an effort started with good intentions, to get a handle on the syphilis health problem in early 20th century America.

"Things that start with a good purpose could end up being a very bad thing," Jenkins said during a speech to the American Public Health Association in 2010.

In response to skyrocketing rates of syphilis from the decade before, the US Public Health Service and the Tuskegee Institute in Alabama began a study in 1932 to record the natural progression of the disease.

The study offered free medical exams, meals and burial insurance to recruit 600 black men, 201 of whom did not have the disease.

Initially the study was only supposed to follow the untreated men for a year, Jenkins recalled. But in 1936 the decision was made to follow them until death. The men were not informed of what was being investigated, and those who carried the disease were not treated for syphilis -- even when penicillin became an effective cure in 1947. Many of the men ended up infecting their wives with syphilis, who in turned passed it on to their children.

Jenkins, who started his career in 1967 as one of the first African-Americans in the Public Health Service Commissioned Corps, said he learned about the study in 1968 and worked with fellow epidemiologist Peter Buxtun to bring some attention to the study so that it could be stopped.

"Those efforts were rebuffed, until Peter got with the (Associated Press) reporter who was able to write that first article (about the study)," he said.

The study did not end until 1972, after congressional hearings were held and an advisory panel was appointed to review the study. It determined that the knowledge gained "was sparse" in comparison to the risk it posed to the subjects.

A class action lawsuit quickly followed, which resulted in a $10 million settlement and compensation for living participants and their wives and children like medical benefits and burial services.

President Bill Clinton formally apologized for the study in 1997, expressing regret that the "federal government orchestrated a study so clearly racist."

He was a vocal critic of racism in health care

Jenkins went on to help take care of the many of the men who participated in the study by serving as the manager of the Participant Health Benefits Program, which offered medical services to them.

"At first I took the responsibility because I thought that I had failed to end the study has soon as I heard about it," Jenkins said during a speech at the American College of Epidemiology's Minority Affairs Workshop in 2015. "But it became to be a gift to me because I talked to these black men, these old black men, who participated in that study because they thought they were doing a good thing."

In 1977, as a doctoral student at the University of North Carolina, he founded the Minority Health Conference. Starting in 1980 he went on to work in various roles for the US Centers for Disease Control and Prevention's National Center for HIV, STD and TB Prevention.

Jenkins started the Master of Public Health program at the Morehouse School of Medicine in Atlanta in 1995, the school said in a statement. The program sought to increase the number of minorities in leadership positions in public health. He was also a public health sciences professor and associated director of the Research Center on Health Disparities at Morehouse College.

He remained a vocal advocate for reducing racial health disparities. He often criticized the medical community for what he considered its reluctance to delve into America's legacy of racism and what role it plays in the chronic health issues that plague minority communities.

"It is the only health condition where we want to study the symptom -- race -- rather than the ideological factor -- racism," he said in the American Public Health Association speech. "It's amazing to me as an epidemiologist. To solve health disparities, we must also study racism."

A Quaker service for Jenkins is scheduled for March 23 in Decatur, Georgia. A memorial service is set for April 6 at Morehouse College.

An earlier version of this story incorrectly said that Jenkins was a professor at the University of North Carolina when he founded the Minority Health Conference. He was a doctoral student at the time.

www.cnn.com - 1 week ago
You cannot have a legendary reunion without a legendary host.
Read More

As UK cases rise, 'people have relaxed too much' officials warn

www.cnn.com - 4 months ago
CNN election law analyst Rick Hasen says that there is enough there for Federal and state officials to investigate President Trump's call where he attempted to pressure the Georgia secretary of state to overturn the 2020 election results.
Read More