Joaquín Salvador Lavado drew the comic strip of the six-year-old Argentine girl, who was curious about the world and finely attuned to its injustices.
Author: Daniel Politi
Published: 2020-10-05 04:41 pm 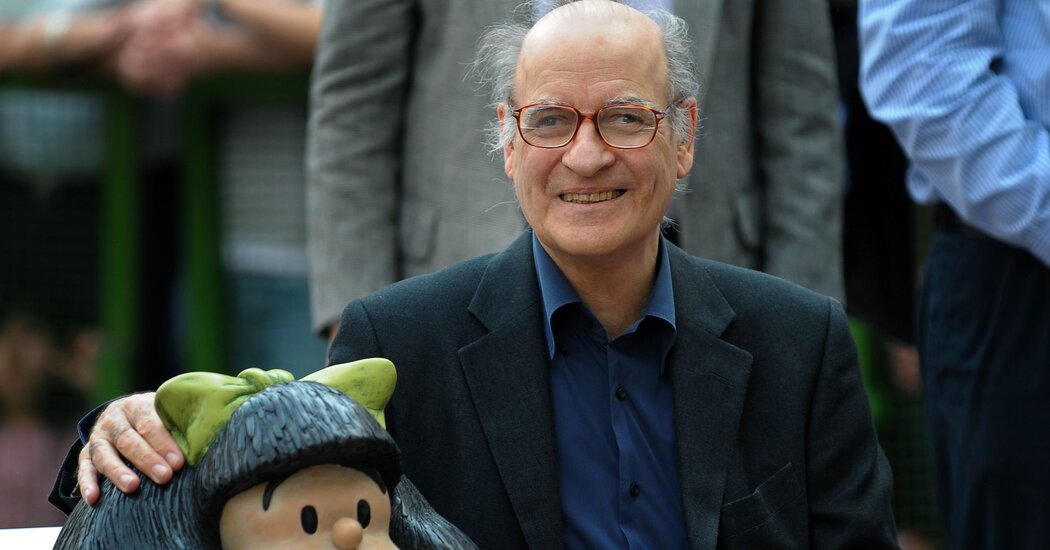 BUENOS AIRES — Joaquín Salvador Lavado, an Argentine cartoonist known as Quino and the creator of a comic strip about an irreverent girl named Mafalda whose unique view of daily life and politics made her a beloved icon across Spanish-speaking countries, died at his home in Luján de Cuyo, Argentina, on Sept. 30. He was 88.

The cause was complications of a stroke, Julieta Colombo, his agent and niece, said.

Quino first drew Mafalda in 1963 for an advertising campaign to sell home appliances that never saw the light of day. The comic strips, which Quino characterized as a “mix of Blondie and Peanuts,” stayed in his drawer until a year later, when an editor of a weekly magazine asked him for material.

The story of a six-year-old middle-class Buenos Aires girl, who was curious about the world and finely attuned to its injustices, was an immediate hit and transcended borders as the comic strips were translated into more than two dozen languages.

In her youthful innocence, Mafalda said out loud what many preferred to keep quiet. And she couldn’t help but ask her frazzled parents basic questions that often left them stumped. “Mom, what would you like to be if you lived?” Mafalda asks, while her mother is doing housework.

In another strip, Mafalda is standing in front of her class, conjugating the verb “trust.” “I trust, you trust, he trusts…” She then turns to her teacher: “What a bunch of naïve people, no?”

The cast of characters grew to include friends, a younger brother and a turtle named Bureaucracy, a nod to the slow-moving government offices that Argentines knew all too well. In one strip, Mafalda tells her mother she will play government with her friends. “Don’t cause trouble,” the mother says. “Don’t worry,” Mafalda replies. “We aren’t going to do absolutely anything.”

Quino decided to end Mafalda in 1974, saying he wanted to stop before it became predictable. He later added it would have been dangerous to continue the strip amid rising political violence ahead of Argentina’s military coup d’état of 1976.

Less than four months after the coup, three priests and two seminarians of the Pallottine order were killed in a Buenos Aires church. Next to the bodies, the assailants had placed a Mafalda poster they had ripped down from the wall, in which the girl points to a police baton and says: “See? This is the stick to dent ideologies.”

“I luckily did not see that at the time,” Quino said in a 2014 interview. “When I found out years later, it was one of the ugliest things I’ve ever felt.”

When Quino was asked years later whether he imagined an adult Mafalda, he said she surely would have been one of the tens of thousands of people who disappeared during rule by the brutal military junta from 1976 to 1983.

Although he stopped drawing Mafalda, new generations continued to fall in love with the irreverent girl who hated soup and loved the Beatles as compilation books became mainstays in family libraries. Quino revived the beloved characters for special occasions, including UNICEF’s Declaration of the Rights of the Child and, more recently, as part of a Covid-19 campaign.

Statues of Mafalda have been erected in Buenos Aires and Spain. There is also a plaza bearing her name in Buenos Aires, and a subway station there with giant Mafalda strips on the wall.

After Mafalda, Quino pursued a darker humor that was even more overtly political in drawing doctors, psychoanalysts, police officers and judges in cartoons that criticized authoritarianism, highlighted the plight of the working class and exposed inequality and privilege.

In one strip, a skinny man is seen rowing a boat holding a group of men in tuxedos around a long table in a storm. One turns to him. “What do you mean you aren’t rowing anymore?” he asks. “Aren’t we all on the same boat?”

Joaquín Salvador Lavado Tejón was born on July 17, 1932, in Guaymallén, in the Mendoza province of Argentina, the son of Cesáreo Lavado and Antonia Tejón, who both emigrated from Spain in 1919. He was quickly given the nickname Quino to differentiate him from his uncle, Joaquín Tejón, a painter and graphic designer who was the first to get his nephew interested in drawing.

Ms. Tejón, a homemaker, died in 1945. Following her death, Quino joined the Fine Arts School of Mendoza. His father, who worked at a home goods store, died three years later.

Quino abandoned school and headed to Buenos Aires at 18 with the dream of becoming a cartoonist. He fulfilled the mandatory military service at 20 and published his first cartoon in 1954 and his first book, “Mundo Quino,” in 1963.

In 1960, he married Alicia Colombo, a chemist, who later went on to work as Quino’s agent. The couple went into exile in Milan in 1976, after someone broke their apartment door following the military coup. Once democracy returned to Argentina in 1983, Quino divided his time between Buenos Aires, Madrid, Milan and Paris. He became a Spanish citizen in 1990.

Ms. Colombo died in 2017. Along with his niece, Quino is survived by five nephews, three of whom live in Mendoza.

Quino received numerous awards, including the Príncipe de Asturias Prize in Spain and France’s Legion d’honneur, both in 2014. In 2017, Quino moved to Mendoza and became more protective of his privacy amid a worsening glaucoma that made him practically blind.

He sometimes expressed frustration at his inability to draw as he was becoming more disillusioned with the world around him.

“I’m flattered that Mafalda is still being read, but it’s sad to think that the issues she talked about at that time still exist,” he said in a 2000 interview. “A lot of essential things haven’t changed. The world she criticized in ’73 is the same or worse.”

Should You Break Up?

www.nytimes.com - 7 months ago
If you’re reading this, you probably already know the answer.
Read More

www.nytimes.com - 3 months ago
In “My Year Abroad,” a 20-year-old is scarred by his experiences after meeting a Chinese-American entrepreneur.
Read More

www.nytimes.com - 6 months ago
Absent connections to the world of celebrity, Donald J. Trump minted his own. His White House wasn’t Hollywood, but maybe that was the point.
Read More
More News & Articles