The Jets’ lack of discipline came to a head Thursday with 11 penalties and six personal fouls. Don’t blame the coaches, middle linebacker Neville Hewitt says. They’ve been emphasizing the need for players to make adjustments every week. “Some of them we
Author: Zach Braziller
Published: 2020-10-05 09:17 pm 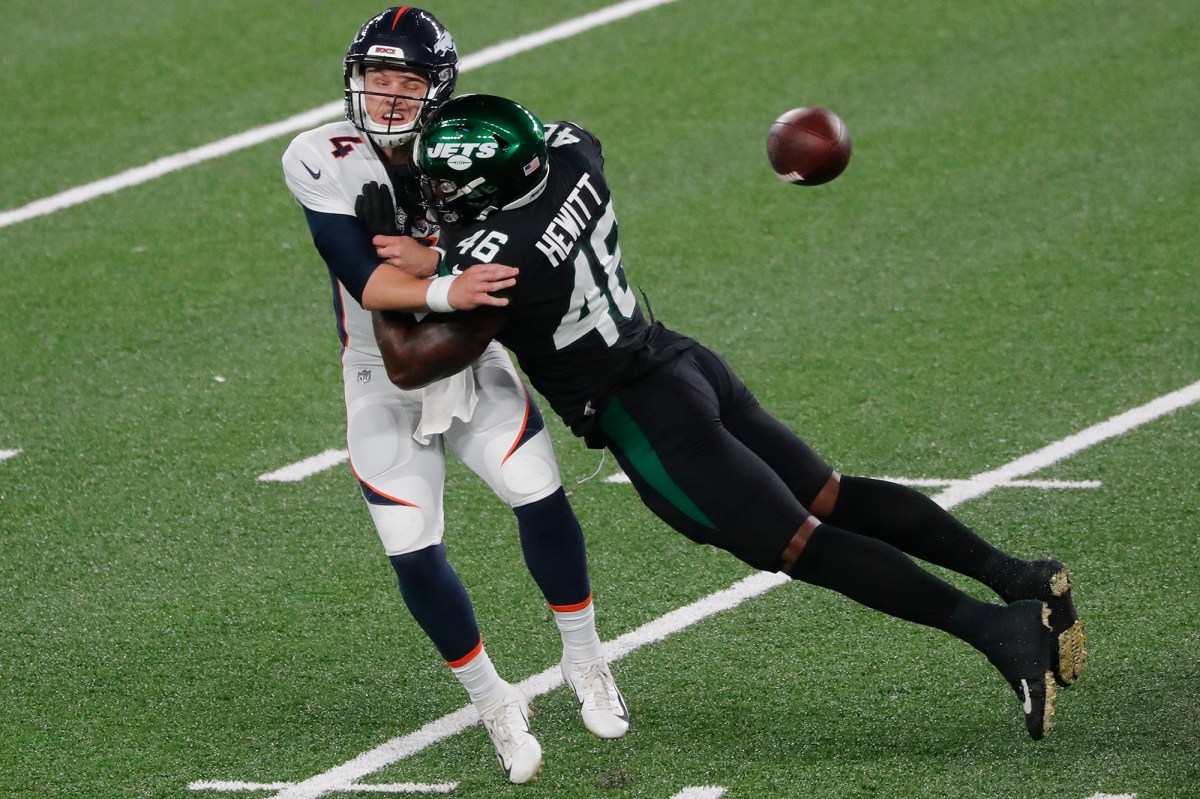 The Jets’ lack of discipline came to a head Thursday with 11 penalties and six personal fouls.

“Some of them we think are bad calls, but at the end of the day, when you make a tackle you have to layoff of the quarterback or you get there after the ball is thrown, you can’t hit him,” Hewitt said.

The Jets already have six roughing-the-passer flags with two in the loss to the Broncos. One of them was particularly crippling.

Quinnen Williams grabbed Broncos quarterback Brett Rypien’s face mask on what would have been a third-down sack with five minutes left in the fourth quarter. It led to the Broncos going ahead for good.

“We just have to play smart,” Hewitt said. “We’ve had penalties on numerous drives we should’ve been off the field. We’re not going to win games until we stop doing those things.”

Receiver Jeff Smith was a bright spot Thursday, catching seven passes on nine targets for 81 yards in his 2020 debut. The 23-year-old undrafted free agent from Boston College caught one pass as a rookie a year ago. Smith missed a lot of time with a sprained AC joint in his shoulder, the same injury quarterback Sam Darnold is dealing with.

“I was out for about four weeks. The main thing was in those four weeks staying focused and staying locked into the game plans,” Smith said. “Pretty much, trying to stay in shape as much as possible, having faith in myself, staying ready and being able to go out there and play fast.”

Running back Le’Veon Bell is eligible to come off injured reserve this week after missing the last three games with a hamstring injury. His return could provide a shot in the arm to the struggling offense.

“It would be huge,” Darnold said. “To be able to have a guy like that, a playmaker like that, it would be awesome. We missed Le’Veon these last couple of weeks and it would be great to have him back.”

Running back Kellen Ballage was released and quarterback Mike White was signed to the practice squad.

nypost.com - 7 months ago
Airbnb said Thursday it will require hosts to comply with enhanced cleaning procedures as part of its effort to reassure guests and local officials during the coronavirus pandemic. The home-sharing company said hosts have until Nov. 20 to commit to the
Read More

nypost.com - 6 months ago
The Big Tech titans face another grilling over accusations of censorship during a Senate hearing Tuesday. Twitter CEO Jack Dorsey and Facebook honcho Mark Zuckerberg are testifying before the Senate Judiciary Committee after their companies came under a
Read More
More News & Articles