LeBron James’s Teammates Beat Him, Then Joined Him

A handful of James’s Los Angeles Lakers teammates played for teams that knocked him out of past playoffs. No hard feelings?
Author: Jonathan Abrams
Published: 2020-10-06 01:04 pm 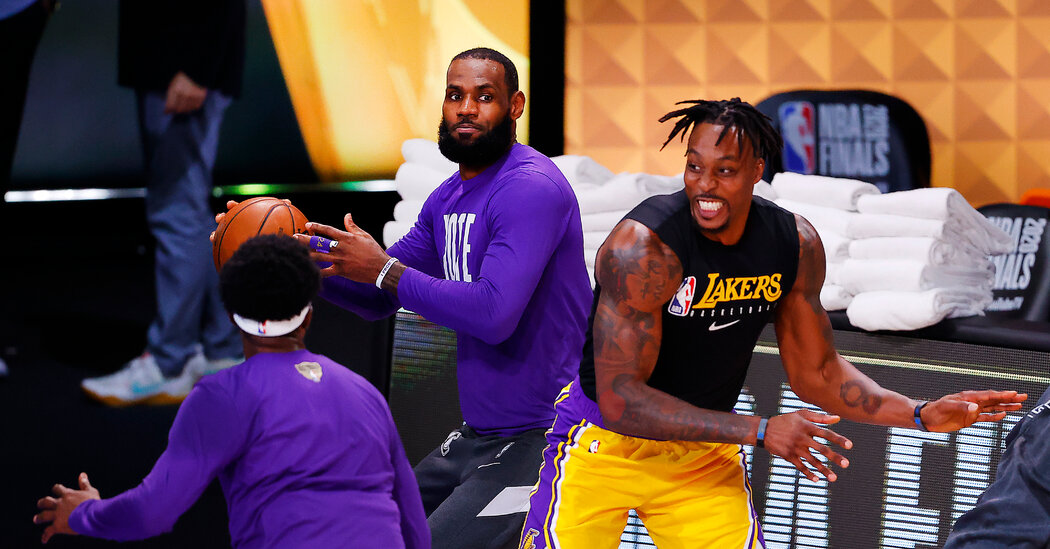 When he was on the verge of reaching the 2020 N.B.A. finals, LeBron James offered praise to some of his Los Angeles Lakers teammates who helped bring the team to championship contention.

“Dwight was a beast,” James said after the Lakers pinned the Denver Nuggets down, three games to one, in the Western Conference finals. “Dwight brought that physical presence. It was great for our ball club.”

James, facing the Miami Heat in his 10th N.B.A. finals, is on the precipice of capturing a fourth championship. A knock against him, if there is one to make in his transcendent career, is that he has not won more championships, despite being in a position to do so in almost every year of the 2010s.

He doesn’t have to look further than inside his own locker room to spot the roadblocks who stifled his earlier championship efforts with the Cleveland Cavaliers and Miami Heat. Howard and Rondo played vital roles in prematurely ending his postseasons in the Eastern Conference. They join the other current Lakers Danny Green, JaVale McGee and Quinn Cook as those who firmly and successfully opposed James in years past.

“These are guys who played a major role that have been able to win against him and now they’re going to win together,” said Stan Van Gundy, who coached Howard and the Orlando Magic to a 2008-09 Eastern Conference finals win over James and Cleveland and is now a TV analyst. “It’s a great testament to how adaptable N.B.A. players are.”

Eleven years ago, Howard was an offensive and defensive fulcrum for an exciting Magic team countering the favored Cavaliers. Most expected James to be coronated that postseason with his first championship after he propelled Cleveland to a 66-16 record, while earning his first Most Valuable Player Award.

James collected 49 points in that one-point loss. In the next game, he drilled a 3-point shot that gave Cleveland a 96-95 win.

“It was probably one of the greatest moments of my career up until that point,” James told reporters recently. “Just knowing the situation, we were about to go down 0-2 and we had home-court advantage. We knew how powerful that Orlando team was, playing against, actually my teammate now in Dwight. So, for me to be able to hit that shot was a huge moment for me. I was still a young kid at the time, so big-time.”

Orlando won the series in six games before falling in the N.B.A. finals to the Lakers.

James, afterward, declined to shake hands with any of the Magic, including Howard.

Now, it’s Howard’s job to set screens to help James to score as many points as possible.

In the 2009-10 season, with James expected to again vie for a championship, Rondo helped the Boston Celtics beat James and the Cavaliers in the Eastern Conference semifinals, initiating James’s departure for the Miami Heat with “The Decision.”

James won his first title in 2011-12 against the Oklahoma City Thunder. Two years later, Danny Green, another current Lakers teammate, helped block him from winning a third, against the San Antonio Spurs.

Cook and McGee were members of the Golden State Warriors team that swept James and Cleveland from the finals two seasons ago.

“We seen each other on separate teams, so we know how it’s like to face each other,” Howard said. “Now being on the same team, all of us having the same killer instinct, that same mind-set that when we get on the court the only thing that matters is winning.”

Teaming up with a foe is nothing new in the N.B.A.

Kevin Durant caused an uproar by joining the Warriors after they came back from a three games to one series deficit to beat his Thunder in the Western Conference finals in 2015-16. Ray Allen created a Boston-size rift when he left the Celtics for Miami in 2012, helping James win his first couple of titles. Matt Barnes faked launching a ball into Kobe Bryant’s face in the 2009-10 season before joining him on the Lakers shortly after.

The list goes on and on throughout N.B.A. history.

This Lakers team, though, may represent a height in rivals joining forces. Lakers Coach Frank Vogel, whom Van Gundy credits for capably merging a roster of disparate pieces, once piloted the Indiana Pacers against James’s Heat in the Eastern Conference finals. Avery Bradley, a starting guard for the Lakers before opting out of the restart, was once a Celtic who battled James.

“Normally, we don’t have guys of LeBron’s caliber bouncing around the way he has, from Cleveland to Miami, back to Cleveland to L.A.,” Van Gundy said. “That’s why I think this has happened, more than anything, because of LeBron’s movement around and playing with a lot of guys and then playing against them. It’s just been a different dynamic.”

It’s also common for former All-Stars to chase championships in the twilight of their careers. It seemed Howard (eight-time All-Star) and Rondo (four) had both reached the ends of their careers before signing with the Lakers. James is still at his lengthy peak, while Howard and Rondo are now role players.

“The role suits him very, very well,” Van Gundy said of Howard. “Dwight was a 20-per-game scorer at one point. His strengths have always been his defense and rebounding, and that’s what they wanted from him.”

Teaming with James can be much easier than opposing him. Green said he has a greater appreciation of James now that he is more advanced in his career. The two share a locker room again after Green began his career as a teammate of James in Cleveland. Before these finals, Green marveled at James’s recollection of Miami’s schemes even though the teams hadn’t played each other in months — “the memory of, I guess, an elephant, people would say, because they have great memories.”

“It’s unbelievable,” Green said. “So outside of that, everything else, he’s just a normal guy. Still the same goofball. Makes a lot of jokes."

One-time foes are now friends, pursuing a common goal. Of course, even teammates can sometimes work against James in the grand scheme of things.

He only has to look on his bench to find J.R. Smith, a former and current teammate, who should probably make sure to keep an eye on the game clock this time around.

www.nytimes.com - 1 year ago
Four pro-democracy figures were ousted from the legislature, prompting another 15 to vow to resign in solidarity, as Beijing cracks down on one of the city’s few remaining venues for political opposition.
Read More

The pandemic has deepened global hunger, with poorer countries sinking deeper into crisis.

www.nytimes.com - 1 month ago
Bill Ritter, a WABC-TV anchor who has moderated mayoral debates for almost two decades, will lead a panel of three journalists in Tuesday’s debate.
Read More

Review: ‘Devs’ Is a Cold and Beautiful Machine

www.nytimes.com - 2 years ago
The sci-fi director Alex Garland constructs a tech thriller in his first series, which accents both his strengths and weaknesses.
Read More
More News & Articles