‘Freedom Day’ for England Is Looking Like a Mirage

All coronavirus restrictions were supposed to end on June 21, but with the new Delta variant, the long-anticipated opening is increasingly problematic.
Author: Stephen Castle and Benjamin Mueller
Published: 2021-06-11 01:42 pm 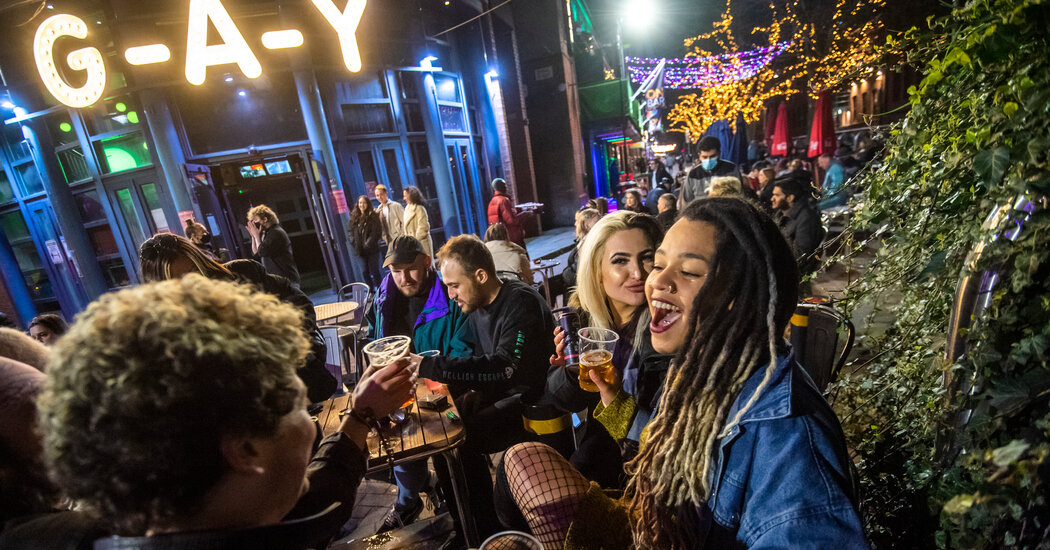 LONDON — The news media call it “freedom day,” the fast approaching moment when England’s remaining coronavirus restrictions are scheduled to be cast off at last, allowing pubs to fill to capacity, nightclubs to open their doors and the curtain to rise in theaters around the country.

But a recent spike in cases of the highly transmissible coronavirus variant called Delta has prompted such alarm among scientists and health professionals that the country now seems destined to wait a little longer for its liberty.

For Prime Minister Boris Johnson, oft accused of doing too little, too late to combat the virus, the stakes are high. The question is not so much whether to postpone “freedom day” — June 21 — but to what degree. Four weeks seems to be the maximum under consideration, with some advocating going ahead with a limited version of the full opening and others favoring a two-week delay.

An announcement on the next steps is scheduled for Monday, and Mr. Johnson plans to study the data through the weekend. But many health professionals have already made up their minds over the seriousness of the threat from the Delta variant, first detected in India.

The concern is that a surge of cases caused by the new variant could translate into a sharper uptick in hospitalizations and risk the virus once again overwhelming the National Health Service.

“Covid is not going to disappear on the 21st of June, and lifting all measures as early as the 21st risks reversing the significant progress we have made,” said Jim McManus, vice president of the Association of Directors of Public Health, which represents senior health officials around the country.

He called for the extension of the current restrictions “to prevent a further uptick in cases — particularly in areas experiencing high or enduring transmission — and allow time for more people to be vaccinated and protected against the Delta variant.”

Still, the decision encapsulates a dilemma familiar to Mr. Johnson, an instinctive libertarian whose reluctance to take tough measures has been blamed by critics for the country’s high number of Covid-19 fatalities. He has been accused of postponing lockdowns, vacillating over border controls and overruling scientific advice.

Indeed, Mr. Johnson was blamed on Friday by the opposition Labour Party for allowing the Delta variant to spread by delaying imposition of the toughest quarantine restrictions on travelers from India.

On the other hand, Mr. Johnson’s big pandemic success has been to roll out vaccines faster than most other nations, with vaccination rates surpassing 90 percent for every age group above 65 in England. As a result, the data show that while case numbers are rising fast from a low base, hospitalizations remain manageable and daily death totals very low, often in the single digits.

A break in the link between infections and hospital cases suggests the government’s speedy inoculation program is working, and that has prompted a noisy caucus of lawmakers within Mr. Johnson’s Conservative Party to urge him to stick to the June 21 date. That chorus has been joined by the owners of pubs, restaurants and other businesses dependent on the public. The theater impresario, Andrew Lloyd Webber, said this week that he was willing to risk arrest to open a show later this month.

By one measure, the Delta variant now makes up 96 percent of all coronavirus cases in England, supplanting even the highly contagious variant from Britain, known as Alpha, that caused deadly waves of the virus around the world this winter.

In a study of household spread, the Delta variant appeared to be 64 percent more transmissible than the Alpha variant, Public Health England said. And, worryingly, people with Covid-19 cases caused by the Delta variant were roughly twice as likely to be hospitalized, a preliminary indication that the variant may trigger more serious illness, though scientists are still working to confirm that.

In England, many of the most onerous pandemic restrictions have already been lifted and people can already go to pubs and restaurants and to museums and gyms, albeit with some limitations. Although Scotland, Wales and Northern Ireland have their own rules, they too are relaxing them.

What many businesses crave most of all is certainty, and that has prompted some support for a delay of four weeks, rather than a two-week period that might or might not be extended, making planning harder.

But caution poses political dangers for Mr. Johnson. “If the prime minister does delay the June 21 reopening date, I pledge to work with all like-minded members of Parliament to use every mechanism at our disposal to resist the changes,” said Julian Sturdy, a lawmaker from Mr. Johnson’s party. “People’s livelihoods, mental health and our long-term freedoms are at permanent risk.”

“The virus is doing well, it’s not under control and it’s growing rapidly,” said Gabriel Scally, professor of public health at the University of Bristol, while acknowledging this trend had not so far led to significant hospitalizations.

“The concern would be that the virus would really take off in large numbers,” he said, adding that although much of the most vulnerable population has been vaccinated, the risk was that the virus could spread among the rest. Even if they are less at risk of serious illness, they still represent a large number of people who would also run the possibility of developing long-term complications.

Neil Ferguson, a British epidemiologist and scientific adviser to the government, told reporters this week that a small part of the Delta variant’s dominance appeared to stem from its ability to dodge some of the immunity generated by being vaccinated or contracting the virus.

That may give the variant a slight advantage in heavily vaccinated countries like Britain or the United States, which was likely to be “the next place we’ll see a reasonable rise” of Delta, said Jeffrey Barrett, director of the Covid-19 Genomics Initiative at the Wellcome Sanger Institute.

Still, vaccines seem to be holding up well against the Delta variant, showing only slightly lower effectiveness than they did against earlier versions of the virus, Public Health England said Friday. Of the 33,206 cases of the Delta variant detected by health officials, 59 percent occurred in unvaccinated people and only 5 percent in people two or more weeks out from their second doses. Unvaccinated people accounted for about two-thirds of emergency room visits made by patients with cases caused by Delta.

For Britain, the problem is that only slightly more than half of adults are fully vaccinated. Many more are waiting for second doses that the government delayed in an effort to give more people the partial protection of a single dose.

And a single dose appears to be only about 33 percent effective against the Delta variant, a steep drop-off from its performance against earlier versions of the virus.

Professor Scally said that the intense political focus on the June 21 date also detracts from the pressure for other measures that the government could take to control the virus.

These include a surge of vaccination in coronavirus hot spots, increased testing of those at high risk, better financial support for low-income people who are required to self-isolate and improved ventilation in workplaces.

“It’s not just a binary of continuing social restrictions or loosening them,” he said. “There are other things the government could and should be doing to get us out of this problem.”

Lessons From a Homebody

Residents Feared Low-Income Housing Would Ruin Their Suburb. It Didn’t.

www.nytimes.com - 8 months ago
Prosecutors said Ms. Cooper called the police twice, saying she had not only been threatened but had been assaulted by a man in Central Park who had asked her to leash her dog.
Read More

A Lie and a Pizza Shop: Why Australian Officials Reversed a Lockdown

www.nytimes.com - 7 months ago
South Australia imposed tight statewide restrictions based on what a man had said about his relationship to a restaurant. And then the authorities learned the truth.
Read More
More News & Articles