Violence continued to spiral out of control on Saturday in and around Washington Square Park, where anti-cop graffiti was scrawled on its arch, a man was beaten and robbed of his cellphone, two others knifed in a wild brawl and an elderly cook left a
Author: Will Engel, Tina Moore, Dean Balsamini
Published: 2021-06-12 09:21 pm 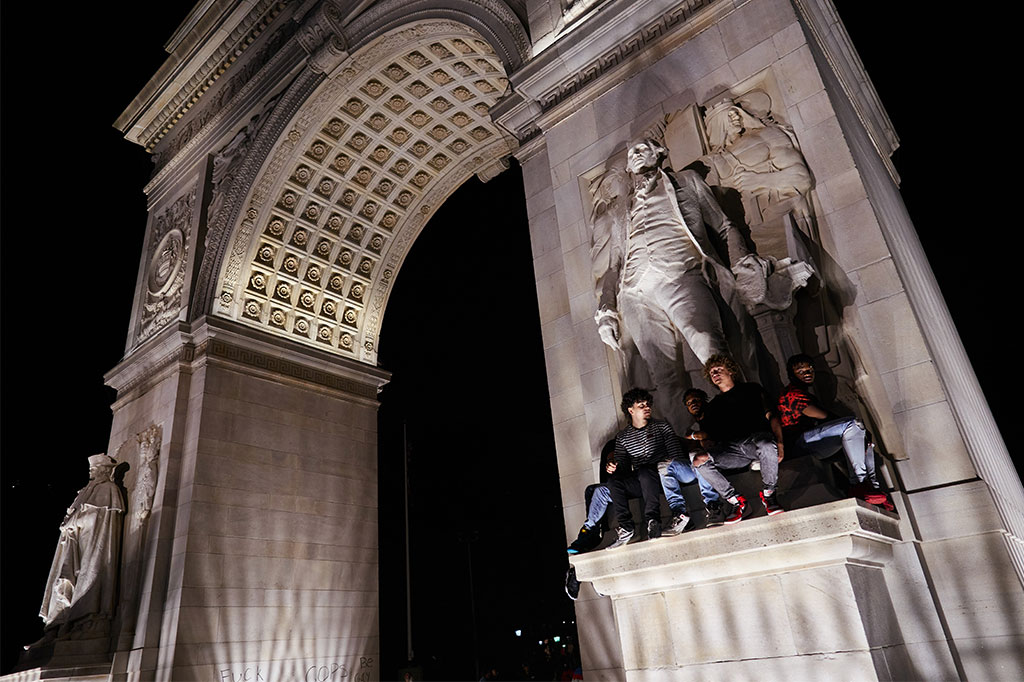 Violence continued to spiral out of control on Saturday in and around Washington Square Park, where anti-cop graffiti was scrawled on its arch, a man was beaten and robbed of his cellphone, two others knifed in a wild brawl and an elderly cook left a bloodied after a vicious morning attack at a neighborhood diner.

The chaos around the Greenwich Village park left at least six injured and a 27-year-old charged with felony assault, as residents and law enforcement alike pleaded for an end to the anarchy.

“The perps run this town,” one disgusted NYPD source told The Post in the wake of the latest chaos. “It is scary to walk around New York City streets. It has gotten so bad that daylight doesn’t scare the bad guys.”

The pandemonium at the Washington Square Diner began around 9:45 a.m. when an unhinged man flew into a dyspeptic rage when he was asked to leave the restaurant, located on 6th Avenue and West Fourth Street, police said.

The man, identified by cops as Gregory Conwell, 27, of Red Hook, Brooklyn, allegedly shoved a 77-year-old cook into a plate glass window and then ran off to the park — where three brave employees found and held him until cops arrived, workers told The Post.

Conwell — who workers said has been a frequent pest, annoying patrons and once even pretending to be one of the waiters — came in the low-key greasy spoon to use the restroom, and then began bothering customers, employees said.

When he was asked to leave, he lost it, the NYPD and diner workers said.

“He started cursing and screaming and yelling and doing whatever he wanted, and then he grabbed the chef and threw him on the window” [on the West 4th Street side of the building], manager George Takos told The Post.

The NYPD said the 77-year-old cook was tossed into the glass as he tried to escort Conwell out of the diner.

The suspect fled but was chased by three diner employees to the park, where they detained him until police showed up, said the workers, one of whom claimed a crack pipe fell out of the man’s pocket during the tussle.

The injured cook, who only gave his first name, Constantino, suffered a gash to the back of his head and was being treated for lacerations at Lenox Hill Hospital following the ruckus, workers and police said.

One of the diner workers who chased the attacker down said the man allegedly bit his arm during the ensuing tussle in the park.

It’s hardly the first time mayhem has been on the menu at the diner.

“That window has been broken at least five times in the past five years. Same situation. They get upset, and they see the best way to hurt you is to break your windows,” Takos said.

Workers, too, were frustrated by the recurring violence.

“This happens a lot and the cops can’t do anything unless someone gets hurt,” one employee told The Post, adding that the diner’s proximity to the problematic park makes it a frequent target for troublemakers.

An NYPD spokeswoman said Conwell was being charged with felony assault because his victim was over 65. Conwell was also charged with criminal mischief and an additional account of assault for biting the diner worker in Washington Square Park.

Police said Conwell had a prior arrest in Brooklyn last year for biting another man during a bar dispute.

Less than eight hours before, three people were hurt in the park when a squabble among about 10 people took a violent turn.

The victims, two men and a woman, told police investigators they had been dancing in a large gathering of about 50 people at around 2:15 a.m. when an argument erupted.

One of the victims, a 24-year-old man, was stabbed once in the left leg and another man was slashed in the leg, authorities said. A woman, 21, was pushed to the ground and kicked during the chaos, cops said. There have been no arrests. One victim, who identified himself to cops as “Psycho Wilson,” was “highly uncooperative,” a police source said.

The fight spilled over to the corner of Washington Square North and Fifth Avenue, where the 10 suspects ran in unknown directions, police sources said.

The three victims were treated and released from Bellevue Hospital for non-life-threatening injuries.

And at around 12:20 a.m. at 1 Washington Square South a 43-year-old man recording an argument got his cellphone knocked out of his hand, as two attackers punched him in the back of the head and in the face, and kicked him, cops said. Adding insult to injury, they also snatched his phone, according to police.

The terrifying encounter wasn’t the only overnight trouble in the park, where anti-police rhetoric, such as “Cops Kill” was scrawled along its famed arch.

Visitors to the park — where a nighttime weekend curfew was enacted after The Post exposed the crime explosion there amid the pandemic — said it’s going to take more than a village to save the landmark green space.

“It doesn’t seem like there’s any control anymore. Nowadays I leave early because I sure don’t wanna be here at night,” said Mike Kinney, 48, of Elmhurst, Queens.

Echoed East Village resident Albert Vera, 60: “The quality of life here has gone down the drain. I know that I would never dare to come here at night . . . It’s not safe. We absolutely need more police patrols. More police presence.”

nypost.com - 3 months ago
"Biblical singles" are being called upon to join Dominion Dating, which caters to Christians who seek to fulfill marriage traditions as defined by the Old Testament.
Read More

nypost.com - 4 months ago
Jameson Taillon will make his long-awaited return to a major league mound Wednesday following the second Tommy John surgery of his career. The Yankees are taking advantage of early off-days to keep Gerrit Cole on schedule, so Taillon didn’t start the firs
Read More

nypost.com - 4 months ago
Global trust in Big Tech is falling drastically, and its unapologetic censorship of the “wrong” news surely has a lot to do with it. Such as Facebook’s nixing a post from Fox News contributor Lara Trump simply because it features an interview with former
Read More

nypost.com - 4 days ago
An Arkansas woman has been charged after she allegedly lied to doctors about her adoptive son suffering from a mysterious illness — and even arranged for him to get end-of-life care.
Read More
More News & Articles