On the final day of the meeting of the world’s wealthiest large democracies, nations are working to reach consensus on plans to limit carbon emissions. President Biden will meet with Queen Elizabeth II later on Sunday.
Author: The New York Times
Published: 2021-06-13 04:44 am 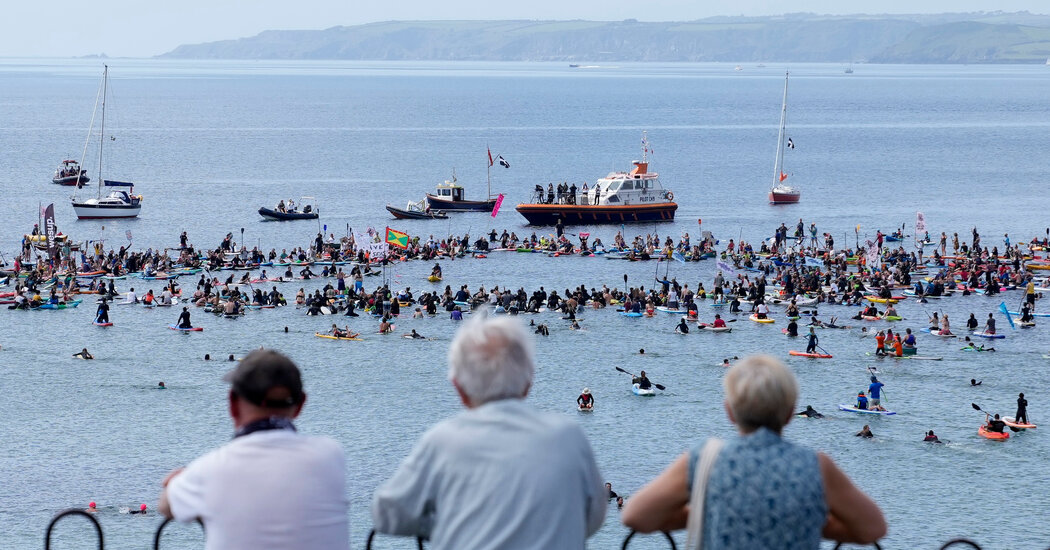 When the Group of 7 leaders gathered in Cornwall, England, for a reception and dinner on Friday night, they did so at the Eden Project, a domed botanical garden chosen to underscore the group’s search for consensus about the need to confront climate change.

On Sunday, they will meet in a more formal setting, aimed at preparing the stage for the world’s nations to unveil newly aggressive targets for reducing carbon emissions by 2030 at a major United Nations climate change meeting in November in Scotland.

President Biden joined his counterparts last week having worked to reposition the United States as a global leader on climate change after four years in which his predecessor abandoned the 2016 Paris climate accord.

The Biden administration plans to focus on delivering strong language among leaders agreeing to keep global temperatures from rising more than 1.5 degrees Celsius above preindustrial levels. Beyond that point, climate change is expected to have extreme and irreversible consequences.

Keeping to that level would require significant new emissions targets from countries like Australia, Canada and Japan. Developing nations, meanwhile, are eyeing whether the United States and other wealthy countries will make good on a promise made more than a decade ago to mobilize $100 billion annually for poor countries to cope with the consequences of climate change.

Climate finance for developing countries currently hovers around $80 billion, according to the Organization for Economic Cooperation and Development, a group of 38 countries that includes all of the major industrialized nations.

“This is where there has been so little progress,” said Yamide Dagnet, the director of climate negotiations at the World Resources Institute, a Washington-based research institute.

United States officials hope to announce a meaningful consensus when the G7 leaders issue a final summit statement — known as a “communiqué” — on Sunday afternoon. But hovering over the climate negotiations, experts say, is continued tension around ensuring an equitable distribution of Covid-19 vaccines and debt relief to poor countries.

“It’s difficult to ask countries to negotiate when there’s a threat that’s in plain sight right now and we’re not putting the resources on the table,” said Peter Betts, an associate at Chatham House, a London-based research institute, and the former lead climate negotiator for Britain and the European Union.

One key to success — and a central topic to be discussed during the climate session on Sunday — will be persuading China to reduce its greenhouse gas emissions. China now emits more than the United States, Europe and Japan combined and has faced intense pressure from the Biden administration to set more ambitious targets.

That could mean winning support from a broader group of nations than just the wealthy ones around the table this weekend. Although China is “not terribly susceptible to pressure from developed countries,” Mr. Betts said, “it does care what the developing world thinks.”

Angela Merkel, who plans to step down as Germany’s chancellor after the country holds elections in September, is attending her final Group of 7 summit this weekend.

Some things have changed since her first such gathering, in 2007 (leaders are no longer disputing the threat of climate change), but some things have not (Ms. Merkel remains the only elected female leader in the club).

Yet what represents a potentially momentous change is the prospect of Ms. Merkel’s absence from the table — for the leading industrialized nations that make up the group, for a Europe where she has been a dominant leader and by the absence of another elected female leader to take her place.

“Just think of what the picture will look like when she leaves,” said Katja Iversen, an adviser to the Women Political Leaders group, who took part in the gender discussion at the 2018 G7 summit in Canada.

Ms. Merkel has used her mix of clout and charm, and her willingness to negotiate deep into the night, to push issues long overlooked as relevant to the global economy, including climate, sustainability and gender equality.

Now, Germany and the rest of Europe will turn to new leaders to shape foreign policy on issues such as military spending, Russia and especially China.

President Biden and his wife, Jill Biden, are scheduled to meet again with Queen Elizabeth II on Sunday at Windsor Castle as part of the U.S. leader’s first foreign trip as president.

The president and first lady will visit with the queen before traveling to Brussels for meetings with NATO and European Union leaders.

The world’s longest-reigning monarch, Elizabeth has met with every American president since Harry S. Truman, except Lyndon B. Johnson.

On a previous visit, in 2018, Mr. Trump made headlines by walking in front of Elizabeth, 95, during an inspection of the royal guard, which was seen as a breach of protocol.

Sunday will be the second visit with the queen this weekend for Mr. Biden and the first lady after a reception and dinner on Friday, as the royal family made an unusually robust presence around the edges of the annual Group of 7 summit.

The royals played host to the G7 leaders at the Eden Project, an environmental and educational center in Cornwall, England, about 35 miles from Carbis Bay, where the summit is being held.

In addition to the queen, Charles, the Prince of Wales and heir to the throne; and his eldest son, Prince William, the Duke of Cambridge; Charles’s wife, Camilla, Duchess of Cornwall; and William’s wife, Kate, the Duchess of Cambridge, also attended.

Earlier Friday, Dr. Biden visited a school in Cornwall with the Duchess of Cambridge.

The summit comes just two months after the death of Prince Philip, the queen’s husband of 73 years. But Elizabeth quickly resumed her schedule of public appearances. Friday’s event was her first with any foreign leader since the start of the pandemic.

President Biden and Prime Minister Boris Johnson of Britain signed a new version of the 80-year-old Atlantic Charter on Thursday, using their first meeting to redefine the Western alliance and accentuate what they said was a growing divide between battered democracies and their autocratic rivals, led by Russia and China.

The two leaders unveiled the new charter as they sought to focus the world’s attention on emerging threats from cyber attacks, the Covid-19 pandemic that has upended the global economy, and climate change, using language about reinforcing NATO and international institutions that Mr. Biden hoped would make clear that the Trump era of America First was over.

The new charter, a 604-word declaration, was an effort to stake out a grand vision for global relationships in the 21st century, just as the original, first drafted by Winston Churchill and Franklin D. Roosevelt, was a declaration of a Western commitment to democracy and territorial integrity just months before the United States entered World War II.

“It was a statement of first principles, a promise that the United Kingdom and the United States would meet the challenges of their age and that we’d meet it together,” Mr. Biden said after his private meeting with Mr. Johnson. “Today, we build on that commitment, with a revitalized Atlantic Charter, updated to reaffirm that promise while speaking directly to the key challenges of this century.”

For three days, beginning Friday, some of the world’s most powerful leaders have descended on a small Cornish village for a series of meetings as part of the Group of 7 summit, which brings together the heads of Britain, Canada, France, Germany, Italy, Japan and the United States.

So what exactly is the G7, and why does it matter?

The nations belonging to the club are the world’s wealthiest large democracies, close allies and major trading partners that account for about half of the global economy.

With broadly similar views on trade, political pluralism, security and human rights, they can — when they agree — wield enormous collective influence. Their heads of government meet, along with representatives of the European Union, to discuss economic issues and major international policies.

Those attending this year’s gathering include leaders from the G7 member countries plus the European Union and guests Australia, South Africa and South Korea, along with India via video link.

The group, whose origins go back to the 1973 oil crisis, grew out of an informal gathering of finance ministers from Britain, the United States, France, Japan and what was then West Germany — initially known as the Big Five — as they tried to agree on a way forward.

Since the 1970s, the group and its later additional members have met dozens of times to work on major global issues that affect the international economy, security, trade, equality and climate change. In 2015, the summit paved the way for the Paris agreement to limit global emissions, which was decided later that year.

For a time, the group had eight members — remember the G8? — but Russia, always something of an outlier, was kicked out in 2014 amid international condemnation of President Vladimir V. Putin’s annexation of Crimea. Last year, President Donald J. Trump said he believed Russia should be reinstated.

Atop the agenda this year will be the coronavirus pandemic and its effects on the global economy, with a focus on worldwide recovery and vaccination.

This summit, hosted by Britain, which currently holds the group’s presidency, is the 47th of its kind and will continue through Sunday. Last year’s summit was canceled because of the pandemic, making this gathering the first in-person G7 leaders’ summit in almost two years. The last was in August 2019 in Biarritz, France.

www.nytimes.com - 3 months ago
Wildgood, a new frozen dessert brand from a Greek ice cream specialist, is an airy confection made with extra-virgin olive oil.
Read More

House Hunting in Morocco: A Marrakesh Riad for Under $500,000

www.nytimes.com - 3 months ago
In Marrakesh, prices are stable as buyer interest from Europe picks up and brokers await the return of international clients.
Read More

Ben Rhodes Takes a Gloomy Tour of the World

www.nytimes.com - 2 months ago
Rhodes’s “After the Fall” surveys the dangers America’s policies have helped create, and how those dangers are coming back to haunt us.
Read More

China Censors the Internet. So Why Doesn’t Russia?

www.nytimes.com - 5 months ago
The Kremlin has constructed an entire infrastructure of repression but has not displaced Western apps. Instead, it is turning to outright intimidation.
Read More
More News & Articles