Irving left midway through the second quarter against the Bucks and was ruled out for the rest of the game.
Author: Brian Lewis
Published: 2021-06-13 04:42 pm 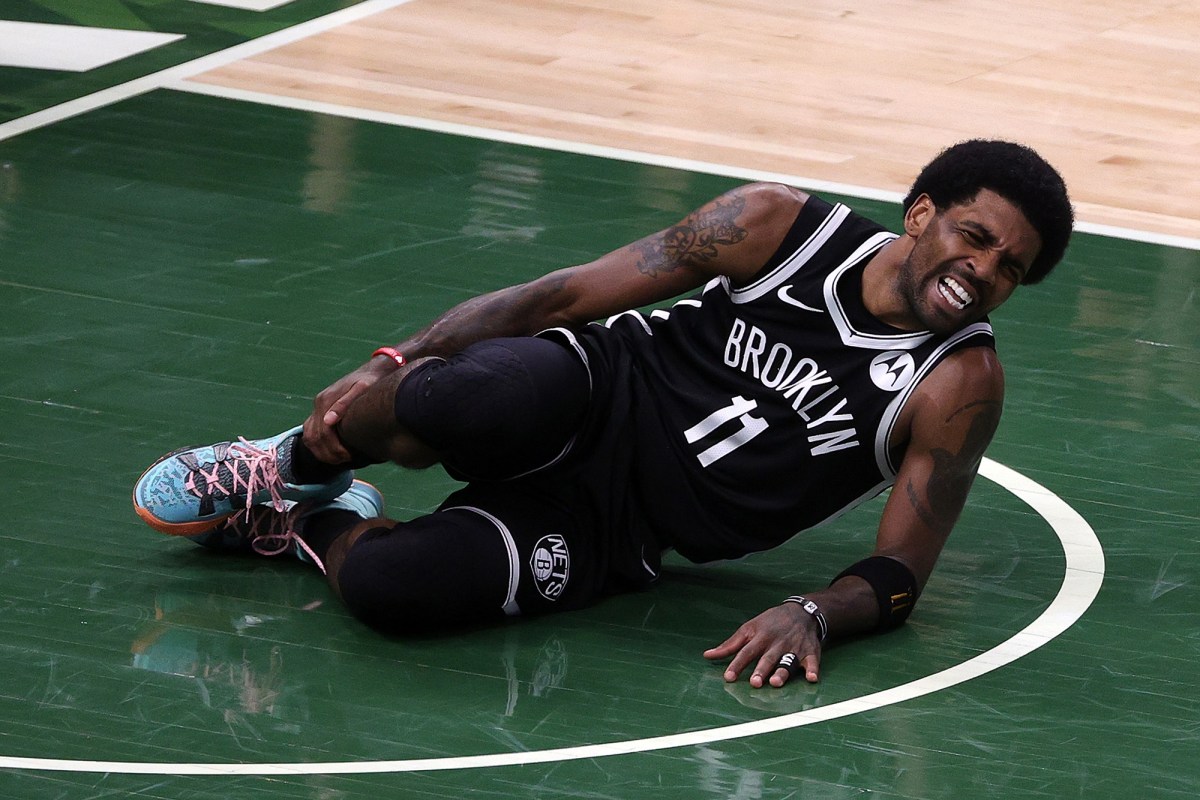 MILWAUKEE — Injuries have bitten the Nets all season, and did so again when Kyrie Irving went down with a right ankle sprain during Sunday’s Eastern Conference semifinal Game 4.

Irving left midway through the second quarter against the Bucks and was ruled out for the rest of the game.

The All-Star guard went up for a layup with 6:04 left in the second quarter, and landed awkwardly on the foot of Milwaukee forward Giannis Antetokounmpo.

It was debatable whether Antetokounmpo, the two-time NBA MVP, gave Irving sufficient room to land — no foul was called.

What’s obvious is that Irving twisted his ankle and immediately went down in severe discomfort. Play continued for 12 seconds before being halted.

Irving was down for several minutes, surrounded by teammates as Nets trainers and medical personnel attended to him. Irving was eventually helped up and walked off the court under his own power and toward the Nets locker room with a visible limp.

The injury interrupted a great postseason run for Irving, who came into Saturday fourth in the playoffs in plus/minus (+107) and tied for sixth in 3-pointers (23). It also came after what had arguably been one of his healthiest and most efficient regular season, just the ninth player to post a 50/40/90 shooting campaign.

But injuries and absences and COVID-19 have hit the Nets had. They are why the Big 3 had only logged 202 minutes over eight games together during the regular season. And James Harden is still hamstrung, having gone down just 43 seconds into this second-round series and yet to return. How long Brooklyn is without Irving remains to be seen.

nypost.com - 5 months ago
A military parachutist who dropped onto high-voltage power lines in southern Arizona had to dangle for several hours before he could be safely rescued by firefighters and utility crews. Firefighters arranged to have the lines de-energized before crews
Read More

nypost.com - 4 weeks ago
When it comes to work, less is more.
Read More

nypost.com - 9 months ago
"They didn't allow Republicans in those key places to observe the mail vote. That makes the mail vote completely invalid," he told Maria Bartiromo.
Read More

The Atlantic’s claims are a washout and other commentary