The report by the NYSBA's Task Force on Nursing Homes and Long-Term Care also blasts Cuomo for not reversing the Department of Health's "unreasonable" mandate sooner than he did.
Author: Bernadette Hogan, Carl Campanile, Bruce Golding
Published: 2021-06-15 05:40 pm 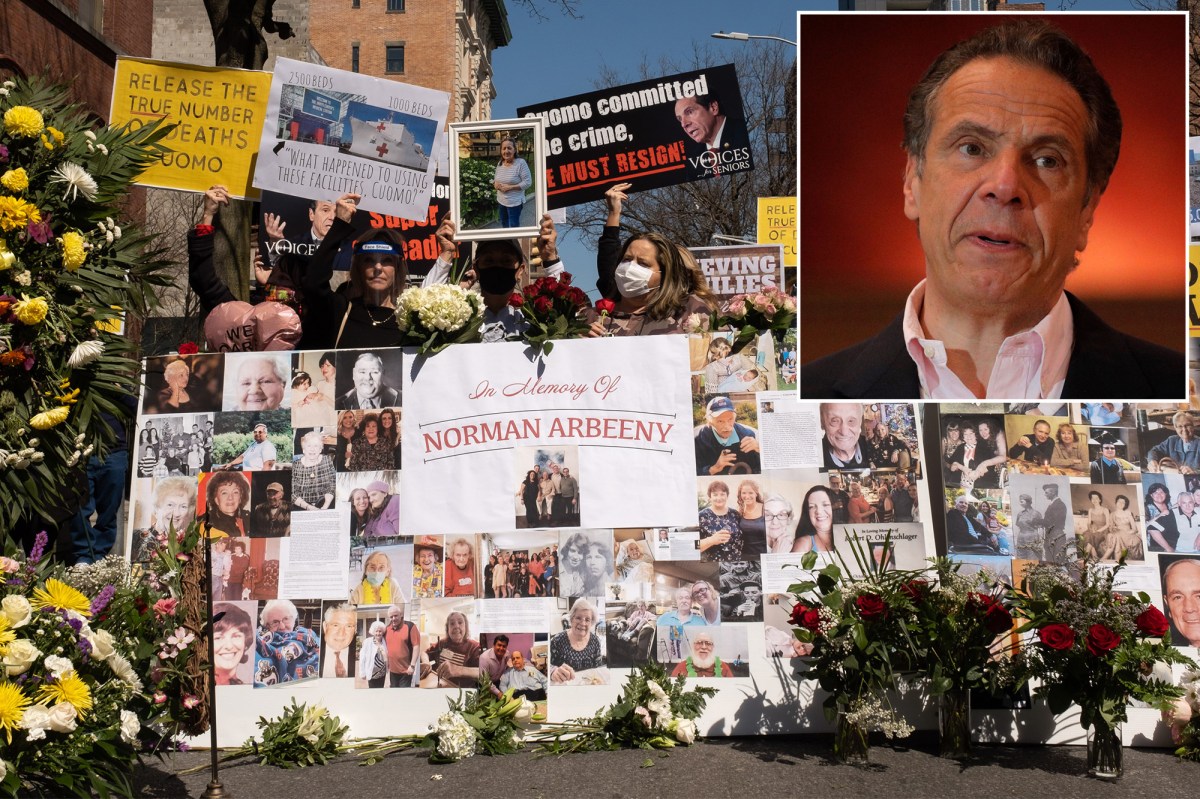 The controversial directive for New York nursing homes to admit COVID-19 patients increased the death toll among residents — and Gov. Andrew Cuomo’s claims otherwise have been disproven, according to a New York State Bar Association report exclusively obtained by The Post.

The 242-page report by the NYSBA’s Task Force on Nursing Homes and Long-Term Care also blasts Cuomo for not reversing the Department of Health’s “unreasonable” mandate sooner than he did, saying it remained in effect weeks longer than necessary.

“Although a determination of the number of additional nursing home deaths is beyond the capacity of the Task Force, there are credible reviews that suggest that the directive, for the approximately six weeks that it was in effect, did lead to some number of additional deaths,” the report says.

“The Department of Health issued a report in 2020 in which it argued unconvincingly that the admission of 6,326 COVID-positive residents during the period the Health directive was in effect had no impact. That cannot be the case, and has now been shown not to be the case.”

The report says it is based on available information “from the onset of the pandemic through the end of April 2021.”

Its findings rely in part on a study by the Empire Center for Public Policy, first reported by The Post, that tied “several hundred and possibly more than 1,000” deaths of nursing home residents to the DOH’s March 25, 2020, order.

The NYSBA report calls the “now infamous” directive “central to the public narrative of New York’s first surge experience,” noting that it “drew almost immediate criticism, caused the Governor to lash out at nursing homes, spurred a congressional inquiry, and, ultimately, an investigation of the Governor himself.”

The last point appears to refer to an ongoing probe by the FBI and the Brooklyn US Attorney’s Office, but Cuomo’s handling of nursing homes is also part of an impeachment investigation by the Assembly Judiciary Committee, which is also focusing on sexual harassment allegations and other matters involving the three-term Democrat.

The report was prepared by a 16-member task force co-chaired by Hermes Fernandez, a lawyer and lobbyist who formerly served as assistant counsel to Cuomo’s late father, then-Gov. Mario Cuomo.

It was adopted by the NYSBA’s House of Delegates on Saturday, during meeting at which 93 percent of about 200 members present voted in favor, Fernandez said.

The report faults the “absoluteness” of the DOH directive, which required nursing homes to admit “medically stable” COVID-19 patients discharged from hospitals, and says it “was commonly read” as overriding a regulation for the facilities to only accept patients for whom they could properly care.

“The directive came at a time when regulations were routinely being overridden,” the report says.

“Providers were told to follow the Department of Health’s instructions.”

The report also says that “it was unreasonable to leave the directive in place for so long” before Cuomo finally gave in to public pressure and reversed it on May 10, 2020.

“Hospitalizations peaked on April 14th. The hospital beds at the Javits Center were barely used, and the USNS Comfort sat empty in the Hudson River,” the report says.

Tracy Alvino, whose father died after contracting the coronavirus while in a Long Island nursing home following neck surgery, said the NYSBA report “confirms what us families already knew.”

“If the March 25 order wasn’t issued, countless lives would have been saved. These were preventable deaths.”

In addition, the report notes that when the controversy over the directive erupted, the DOH “also ordered that nursing homes secure and maintain a sixty day supply of [personal protective equipment].”

“No one would argue with the need for nursing homes to maintain adequate levels of PPE, but this was an order to stockpile PPE at the moment of highest cost and least supply,” the report says.

“The order did nothing for patient care at the time, but did increase nursing home costs.”

Assemblyman Ron Kim (D-Queens) said Tuesday that he suspected the NYSBA report would be “the beginning of many other reports that will come to prove the deadly impact of the March 25 order.”

“The window of being truthful and asking for forgiveness is gone,” said Kim, whose uncle died in a Queens nursing home after suffering symptoms of COVID-19.

“I think there was a small window early on where they could have admitted their mistake and asked for forgiveness but now they have tripled down on their lies amid cover-ups, where if they admit the truth, they admit to acting criminally.”

Haydee Paybee, whose mom died of COVID-19 in a Manhattan nursing home, said, “It’s great that the Bar Association highlighted the March 25 order.”

“Why would you place COVID patients with the most vulnerable people in nursing homes? It’s insane,” Paybee said.

“Cuomo is trying to let time pass so the issue goes away. The families will not make this issue go away.”

A DOH spokesperson said of the report: “Sadly, this is yet another example of some politicians pushing their political agendas and personal vendettas.”

“This latest report, like others before it, supports what we’ve said all along, that New York was blind-sided and got hit the hardest, that when COVID got into communities it quickly and quietly spread from asymptomatic staff into nursing homes, and that New York’s nursing home experience was not unlike that of other states,” the spokesperson said.

“The report goes on to say New York’s proportion of nursing home deaths to total deaths ‘varied little from the rest of the nation’ and that ‘New York’s nursing homes are no better and no worse than the nation at large.’”

nypost.com - 4 months ago
A major paparazzi shop claims it was forced to file for bankruptcy because of skyrocketing costs in its legal battle against Meghan Markle. Splash News & Picture Agency, which is being sued by Markle in a privacy lawsuit over photos taken during a “privat
Read More

Walmart’s ‘Made in the USA’ claims under fire again

nypost.com - 6 months ago
Walmart is once again playing fast and loose with the rules when it comes to labeling goods “Made in the USA,” according to an industry watchdog. The world’s biggest retailer — which five years ago managed to dodge a federal inquiry over its labeling
Read More

nypost.com - 5 months ago
GameStop’s stock price headed for another explosive gain Thursday as rookie investors heralded the second wave of last month’s Reddit rally. Shares in the video-game retailer surged 74 percent in premarket trading to $159.64 as of 7:14 a.m. after more tha
Read More

Eric Adams vows to get tough on crime in joint appearance with Gov. Cuomo

nypost.com - 3 weeks ago
Adams warned that the Big Apple was turning into a free-for-all.
Read More
More News & Articles