Euro 2020: France Beats Germany, in Control at All Times

A score line disguises an imperious performance from the reigning World Cup champions as they throttle Germany in their debut at Euro 2020.
Author: Rory Smith
Published: 2021-06-15 07:17 pm 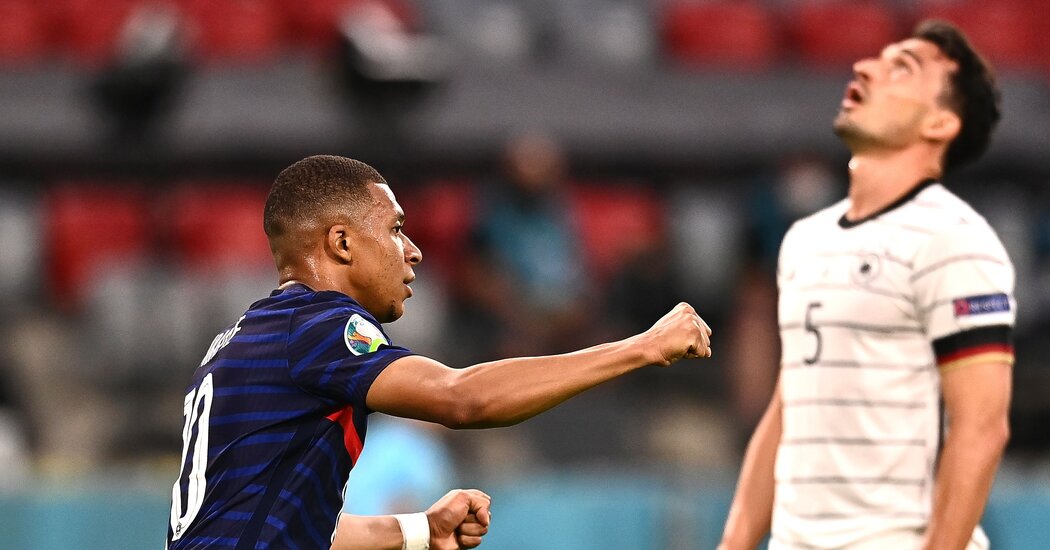 At last, just after the start of the second half, France just about had to break a sweat. Quite how long it lasted is a matter of opinion: a low-ball estimate might have it at around 10 minutes; an inflated one would place it somewhere nearer a quarter-hour. It was, either way, not long, not in the grand scheme of things.

Only in that single spell did Germany seem to remember that it was one of soccer’s superpowers, too, that it was on home turf in Munich, that it had a team packed full of players tested and proven in the white heat of the Champions League. Only in that blink of an eye did France look just a little harassed, just a touch harried, just ever so slightly uncertain.

Other than that, the world champions were nothing but serene, the 1-0 score line disguising a gulf between the teams. Didier Deschamps’s France had taken the lead midway through the first half, Mats Hummels firing into his own goal, and had sailed through, unruffled and untroubled, ever since. The French were bigger and better and stronger and smarter than the Germans; the host could not lay a glove on its guest.

It was the sort of imperious performance that fit the image France had coming into the tournament: a country that has an almost impossible wealth of talent to choose from; a squad that could have been left at home and replaced, in its entirety, by a whole other team that would be equally gifted.

But it is not, in truth, that talent that characterizes this French team. It is, first and foremost, the control it exerts over itself, over its games. France is formidably miserly. Deschamps takes his team of all the talents and turns it into a blue wall, challenging opponents to find a way through. When that proves impossible, when they lose heart, France picks them off, with its almost comically potent strike force.

And second, what stands out about France is its grit. In those 10 or 15 minutes, when Germany surged, when Serge Gnabry might have scored twice, France fell back and dug in, resolute and unmoving. It was not a storm, not quite, but it certainly rode out the squall. And then, as soon as Germany had run out of steam, France wiped its brow, cleared the sweat from its eyes, and took control once more. It had a goal; a single goal is always enough. And that is what concerns France most of all: doing enough.

Raise the Federal Minimum Wage or Abolish It?

www.nytimes.com - 5 months ago
It has stagnated at $7.25 an hour for more than a decade. Is upping the minimum wage to $15 the best way to fight poverty?
Read More

www.nytimes.com - 3 months ago
The death has some questioning the protections that have long kept Israelis safe.
Read More

www.nytimes.com - 7 months ago
The mob in Washington attempting to disrupt the peaceful transition of American power also posed a threat to all democracies.
Read More
More News & Articles