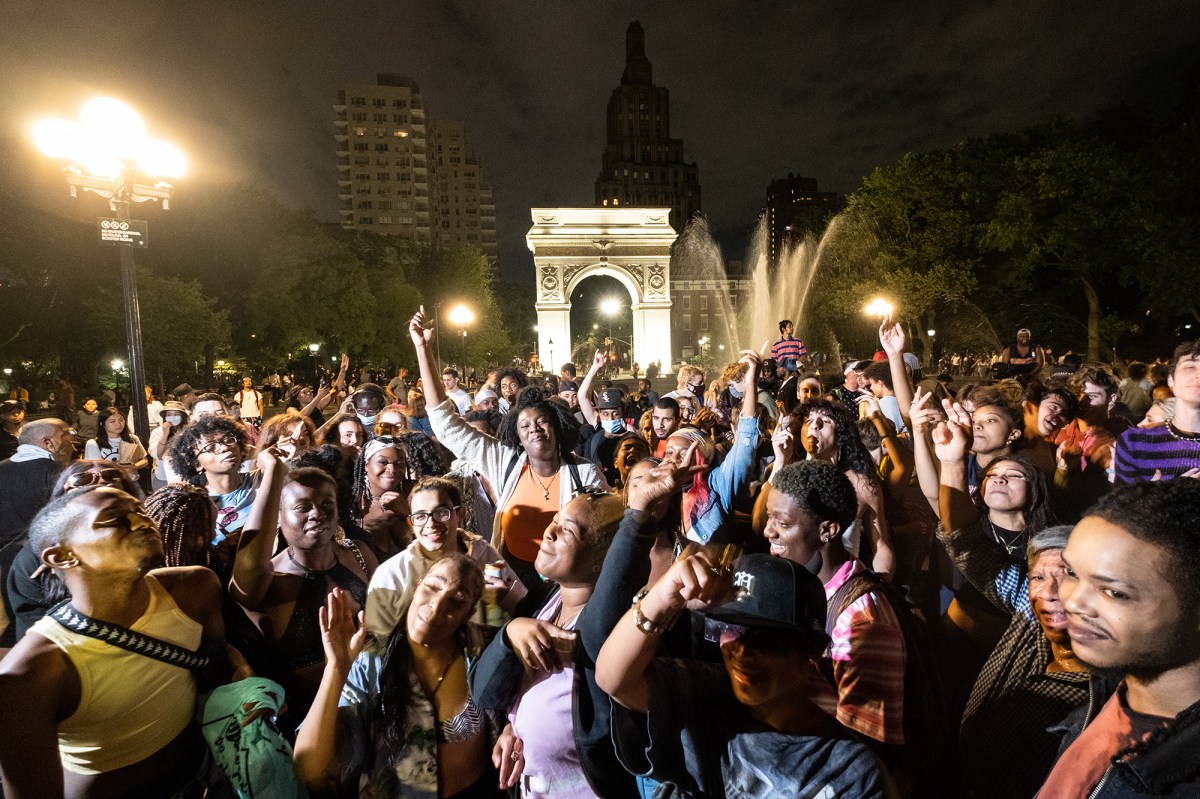 The left can’t have it both ways — defunding the police and tying their hands and then complaining when their parks and cities are being destroyed by these anarchists.

Sometimes force is necessary to maintain order, otherwise taxpaying citizens move out, and then there goes the tax base to fund all these liberal policies.

The criminals who have taken over Washington Square Park are clearly beyond reasoning with.

They are not vandals, nor are they stand-up citizens trying to make a political point. They are anti-police and anti-social.

Thanks to our mayor’s blatantly deliberate, asinine ignorance of the out-of-control crime in the city and his spineless bowing to the left, this is what our Police Department now has to deal with.

After reading several articles about the “descent into bedlam” at Washington Square Park, I came away with a sick feeling.

For me, as a young college student and then years later as an educator, Washington Square Park was the place you went to for a flavor of our city — art shows, chess games, celebrity sightings and music.

Guitarists would pick a spot under the arch and play their hearts out to the delight of all who wandered in and out.

Now, drug use, stabbings, filth, graffiti and fear have taken over. I would ask where the city officials are in all this, but I know where they are: They’re too busy handcuffing our NYPD and the courts to be bothered.

When you elect such people into office, this is what you get. Washington Square Park is a sad and cautionary tale.

There is violence in Washington Square Park, which this fool of a mayor thinks will go away naturally. The man is out of his mind.

If you want the violence in the park to end, send the police in, arrest all the criminals and prosecute them to the fullest extent of the law. Doing nothing only encourages criminals and troublemakers to become bolder. If you tolerate crime, gangs and violence, they get worse.

The lawlessness in New York City came about because of de Blasio — his lack of support for law enforcement and his making excuses for criminal behavior.

In doing so, our beloved police officers have been demonized — making their already inherently dangerous job impossible.

A 77-year-old cook working at a diner in close proximity to the park was violently thrown into the window of the diner. An inordinate number of heinous crimes have been perpetrated against children and the elderly.

Such criminal decadence should be deemed unendurable by the residents of New York City, and these self-serving politicians should be banished from their respective offices.

Can anyone in the five boroughs actually say this city is better off then it was eight years ago? He has turned New York into a sewer, and people can’t wait to leave for other parts of this country.

He has tied the hands of our great police force, which must stand by while crime escalates to new highs. Garbage is everywhere. Homeless people are everywhere. You can’t walk in our great parks without fear of an attack.

Who would’ve thought that one man could create such a sad state in this city in just eight years?

Hopefully, the next mayor will be able to reverse the downward spiral that the “Village Idiot” caused.

Want to weigh in on today’s stories? Send your thoughts (along with your full name and city of residence) to letters@nypost.com. Letters are subject to editing for clarity, length, accuracy and style.

nypost.com - 8 months ago
The day before Mike Tyson’s infamous rematch against Evander Holyfield in Las Vegas in June 1997, the heavyweight boxer went to collect his paycheck at the office of his promoter, Don King, at the MGM Grand. A grinning King pulled out a pen and wrote a
Read More

Tiger Woods and his many car accidents explained

nypost.com - 5 months ago
Tiger Woods may be one of the world’s best when it comes to golf but he’s had a series of troubles behind the wheel throughout his career — including two crashes that rattled his personal life. Most infamously, in 2009 he smashed up his Cadillac Escalade
Read More

nypost.com - 4 months ago
The baby's parents still haven't been able to travel to the US to meet their daughter.
Read More

nypost.com - 8 months ago
A new holiday-themed reality show from HBO Max called "12 Dates of Christmas" premieres on Thanksgiving and follows three aspiring lovebirds as they search for a perfect match to bring home to celebrate Christmas with their families.
Read More
More News & Articles