Yankees’ Deivi Garcia decision gets worse the deeper you dig

SAN DIEGO — The morning after one of the Yankees’ most confounding on-field decisions in decades, one question sticks in my craw: Didn’t they use the opener wrong? As an analytics enthusiast, I have embraced the use of openers — as the alternative to
Author: Ken Davidoff
Published: 2020-10-07 12:09 pm 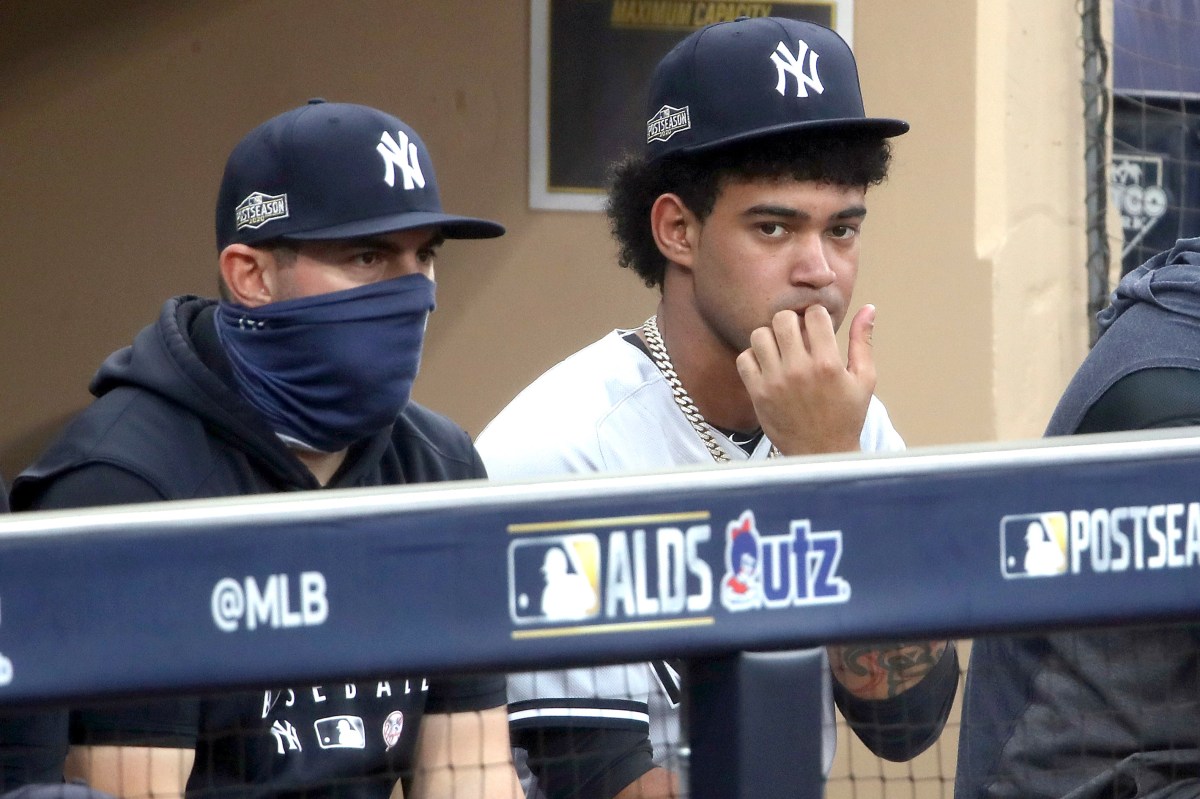 SAN DIEGO — The morning after one of the Yankees’ most confounding on-field decisions in decades, one question sticks in my craw:

Didn’t they use the opener wrong?

As an analytics enthusiast, I have embraced the use of openers — as the alternative to throwing a replacement-level starter to the wolves. In the Yankees’ final game of 2019, they deployed an opener, and while it didn’t work — Chad Green started and immediately gave up three runs — I thought it made more sense than going with a diminished J.A. Happ.

The Yankees contended that they did the latter Tuesday night, a move that backfired rather spectacularly in a 7-5 American League Division Series Game 2 loss to the Rays that tied things up at 1-1.

It appeared that, in addition to new ace Gerrit Cole and old reliable Masahiro Tanaka, a resurgent Happ and rookie Deivi Garcia had established themselves as bona fide starting options for the postseason. Instead, the Yankees decided to limit Garcia to an inning and have Happ, a starter for nearly all of his career, enter in relief as an attempt to force the hand of Rays manager Kevin Cash, who is blessed with a deep, versatile roster.

Most of the planet wondered the same thing: Why wouldn’t the Yankees just let Garcia, who had impressed considerably in his six regular-season starts, get a real shot at taming the Rays? Were they not as impressed? If you look under the hood on Baseball Savant, you will see that Garcia could have gotten hit a little harder in those outings; opponents slugged .420 against him and that should have been .459 based on hitters’ exit velocity. OK, Tanaka’s expected slugging for 2020 stood at .439 against an actual .455, not a huge difference. And Garcia, who uses his changeup second-most often after his four-seam fastball, actually performed better against lefty hitters (.579 OPS) than righties (.817) during the regular season. The run he gave up Tuesday was a homer to amazing Rays rookie Randy Arozarena, a righty hitter.

Happ, post-game, didn’t hide his disappointment with the Yankees’ decision-making, even as he repeatedly said that presented no excuse for his poor results. Garcia verbally shrugged it off, and maybe the toughness that seemingly served him so well on the mound will help him navigate this diss. Shoot, maybe the Yankees can just start him for Thursday night’s Game 4 and see if he can give them five innings.

In any case, what started out as a brilliant series for the Yankees now becomes a mess of their own making, with two of their most important pitchers disrupted and their options for the rest of the week compromised. If they don’t clean it up, this one will sting for a very long time.

nypost.com - 5 months ago
Big tech companies face hefty fines in Britain and the European Union if they treat rivals unfairly or fail to protect users on their platforms, in proposed regulations unveiled Tuesday by officials in London and Brussels. The EU outlined its long-awaited
Read More

nypost.com - 6 months ago
The Las Vegas Raiders got defensive after being fined $500,000 and becoming the first NFL team to be docked a draft pick for repeated violations of the league’s COVID-19 protocols. Team owner Mark Davis called the fines “draconian” in an interview with
Read More

Gov. Cuomo, Albany leaders reach deal on $212B budget with $4B in tax hikes