The forecast comes from the University of Washington's Institute for Health Metrics and Evaluation. But here's why some other disease specialists are highly skeptical.(Image credit: Sean McMinn/NPR)
Author: Nurith Aizenman
Published: 2020-09-04 08:41 pm 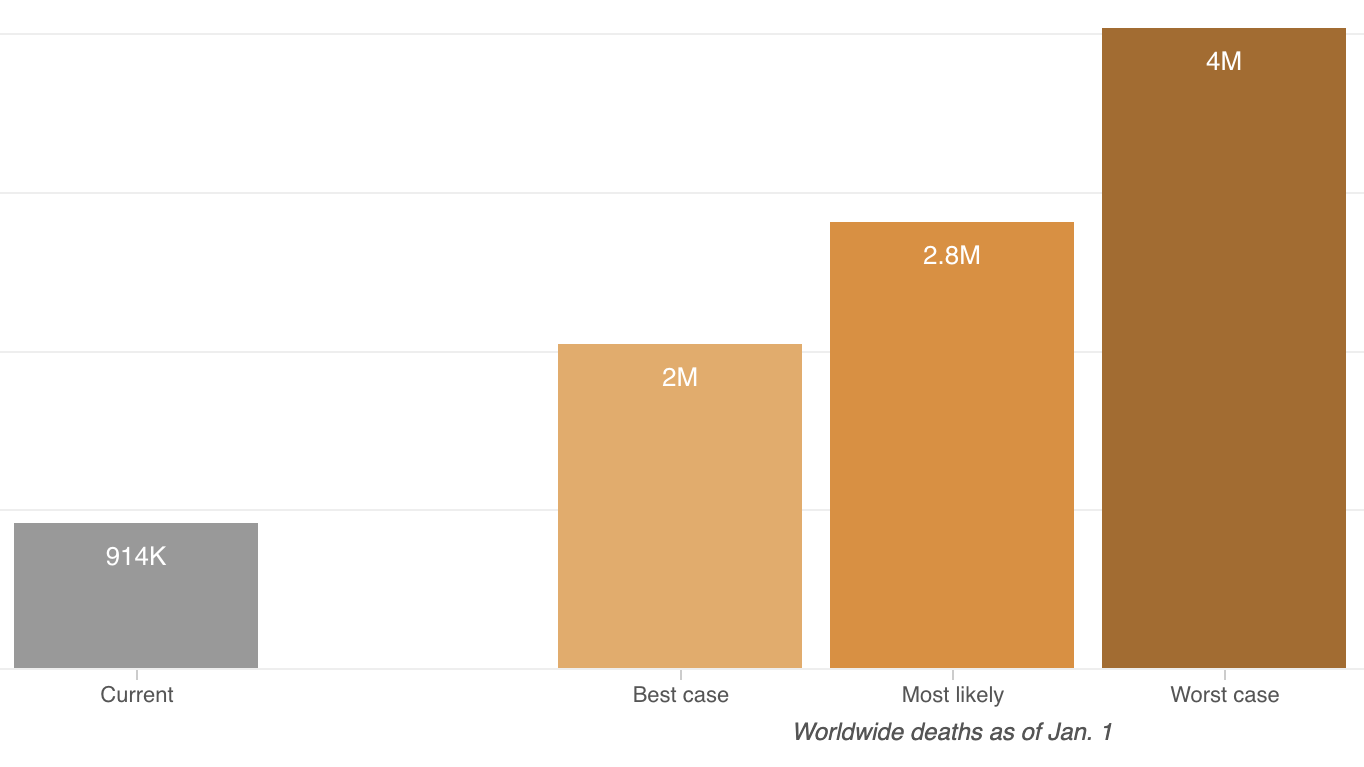 New estimates released this week suggest the global impact of the coronavirus pandemic will reach even greater levels of awfulness before 2020 is over: A prominent forecasting team projects that between now and Jan. 1, the virus will kill an additional 1.9 million people worldwide, pushing the total death toll by year's end to above 2.8 million.

But other disease specialists are highly skeptical of that forecast, which comes from the University of Washington's Institute for Health Metrics and Evaluation or IHME. NPR spoke with the head of IHME's team, Chris Murray, as well as two researchers who are not involved with IHME's work: Ashish Jha of Brown University and Kalipso Chalkidou of the Imperial College School of Public Health in London. Here are five takeaways from those interviews:

1. The United States could continue to rank among the hardest hit countries.

According to IHME, by year's end the death toll in the United States will top 410,000 — second only to India's death total, which is projected to reach nearly 660,000, and well ahead of Brazil's projected 174,000 dead. Similarly, when it comes to deaths as a share of population, the U.S. is projected to rank eighth. (The top five in that group are the U.S. Virgin Islands, the Netherlands, Spain, Belgium and Peru.) And Murray expects that Americans will help fuel that trend by easing up on precautions in response to the decline in daily new cases since mid-July. "Rather than celebrating, we should be planning for what is coming up in the fall," he says. "By December we can get up to 30,000 deaths a day at the global level. So it's so important for governments to be anticipating this."

Relaxed vigilance won't be the only factor behind the autumn upswing in cases, says Murray. The major driver will be colder weather in the northern hemisphere. He says the team compared the rates of coronavirus transmission to date in countries in the southern hemisphere, where June through August coincide with winter, and those in the Northern hemisphere, where those months bring summer weather. "When you look at the huge epidemics that unfolded in Argentina, despite considerable efforts at lockdowns, the big epidemics that occurred in Chile, the epidemics in Southern Brazil and South Africa" he says, "and contrast them with what was happening in the Northern hemisphere, in places with similar social distancing mandates, where things were actually on average, improving — that's where in the statistical analysis, we see a very strong correlation with seasonality."

This analysis doesn't speak to why colder weather correlates with greater transmission — for instance, it could be that people spend more time indoors or that the virus survives better in cold air or some combination of those explanations. Regardless of the reason, says Murray, because far more people in the world live in the northern hemisphere, the arrival of cold weather there will dramatically increase the number of daily global infections overall.

3. These projections could be substantially off.

Ashish Jha, dean of Brown University's School of Public Health, says he finds IHME's forecast highly implausible — particularly when it comes to the projected 410,000 death toll in the U.S. by Jan. 1. "I think that's completely unrealistic. I see no basis for that," says Jha.

Among his critiques is that IHME's team assumes that people who are infected with coronavirus in the coming months will die at the same rates as those who were infected earlier on in the pandemic. Murray says this is based on the team's finding that death rates have failed to improve even after advancements in various therapies and treatments.

Jha disagrees. "We have gotten so much better at taking care of sick patients, I think mortality has probably fallen by about 50%," says Jha. "The idea that everything we have learned in the last six months, we will have forgotten and that none of the new therapies will make a difference — I don't know any public health person who can look at this and think this is a credible estimate."

4. It's not even clear how many people have already died of COVID-19.

A related challenge is that many countries lack reliable health statistics. This is particularly true of low- income countries, says Imperial College's Kalipso Chalkidou — who also directs global health policy at the thinktank, Center for Global Development and is leading an international effort to quantify the wider health impacts of the pandemic.

"In most countries around the world we really don't know what people die from," says Chalkidou. And she adds, this means it's likely that vast numbers of COVID-19 deaths are going uncounted.

One result is that estimates on the global coronavirus death toll to date already vary substantially. For instance, IHME estimates that about 910,000 people have died worldwide. That's about 44,000 more than is estimated by another prominent team, led by researchers at Johns Hopkins University. Murray says the difference comes down to adjustments IHME's team has made to make up for what appears to be a significant undercounting of COVID-19 deaths in two countries where the outbreaks have been particularly severe: Ecuador and Peru.

Chalkidou notes that, "we also don't have good data on comorbidities [that increase people's chances of dying of COVID-19] — how many people suffer from chronic conditions such as diabetes for instance in Africa." That further complicates efforts to accurately predict the course of the pandemic in the region.

5. Getting the forecast right could have political implications.

Jha says his disagreement with IHME's methodology amounts to much more than a technical debate. "The problem here is if we come in at 250,000 or 300,000 dead [by year's end in the United States] — which is still just enormously awful — political leaders are going to be able to do a victory dance and say, 'Look, we were supposed to have 400,000 deaths. And because of all the great stuff we did, only 300,000 Americans died.'" says Jha.

"It's just setting a bar that's so easy to beat, it makes us somehow numb to the actual horrendous outcomes that the United States has had so far."

www.npr.org - 2 months ago
Biden said he aims for the U.S. to find some normalcy by July 4th. New York Gov. Cuomo faces an impeachment inquiry. Louisville marks one year after the killing of Breonna Taylor.
Read More

As NPR Celebrates 50 Years, We Look Back On 'Ping-Pong Diplomacy'

www.npr.org - 4 days ago
Fifty years ago, a chance encounter at a table-tennis tournament opened the door for warmer relations between the U.S. and China, back when China was mostly isolated from the West.
Read More