Biden applauds Supreme Court ACA decision, says it is a victory for Americans 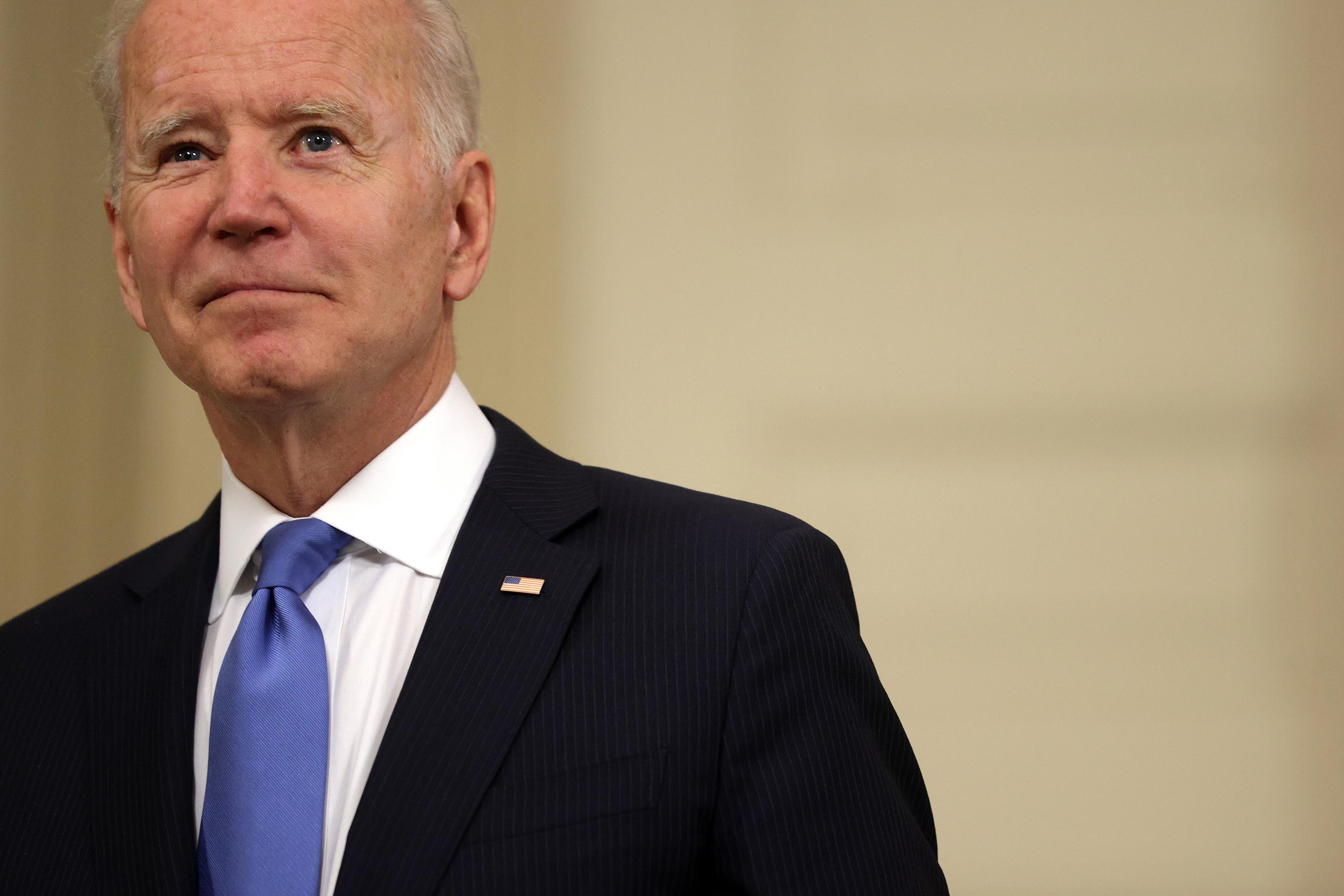 In a statement Thursday, President Biden applauded the Supreme Court’s 7-2 decision to dismiss a challenge to the Affordable Care Act.

“Today’s U.S. Supreme Court decision is a major victory for all Americans benefitting from this groundbreaking and life-changing law,” Biden writes. “It is a victory for more than 130 million Americans with pre-existing conditions and millions more who were in immediate danger of losing their health care in the midst of a once-in-a-century pandemic.”

The lawsuit challenging the ACA, colloquially “Obamacare,” was brought by Republican states opposing the law and supported by former President Trump — the court’s decision marks the third time the highest court in the land has upheld Obamacare.

“After more than a decade of attacks on the Affordable Care Act through the Congress and the courts, today’s decision – the third major challenge to the law that the U.S. Supreme Court has rejected – it is time move forward and keep building on this landmark law,” Biden wrote Thursday, pointing to provisions in his administration’s American Rescue Plan that expanded the ACA and the administration’s expanded enrollment period, which allows individuals to purchase health care through the exchanges through Aug. 15.

“Today’s decision affirms that the Affordable Care Act is stronger than ever, delivers for the American people, and gets us closer to fulfilling our moral obligation to ensure that, here in America, health care is a right and not a privilege," it adds.

Remember: In its decision, the Supreme Court said the states challenging the law lacked the standing to sue and did not weigh in on the constitutionality of the Obamacare.

Still, it's a victory for supporters of the Affordable Care Act. Here's a look at how some congressional Democrats reacted:

The White House and President Biden tweeted a reminder that the special enrollment period for the American Care Act is open until Aug. 15, after the Supreme Court ruled to keep the law in place.

"Today’s Supreme Court ruling once again underscored the incredible strength of the ACA. A record 31 million people have enrolled in health care through the law," the White House's tweet said, adding that 1.2 million more signed up using the special enrollment period.

Biden also tweeted saying the ruling was a "big win for the American people."

"With millions of people relying on the Affordable Care Act for coverage, it remains, as ever, a BFD. And it’s here to stay," Biden added.

BFD refers to a comment Biden made about health care reform, calling it a "big f-ing deal."

The Biden administration told the Supreme Court on Feb.10 that it should uphold the Affordable Care Act, reversing the position of the Trump administration that had urged the justices to strike down the entire law amid the coronavirus pandemic.

"Following the change in Administration, the Department of Justice has reconsidered the government's position," Deputy Solicitor General Edwin Kneedler told the court in a letter. The United States "no longer adheres to the conclusions" in a brief filed by the Trump administration.

Kneedler said the federal government now maintains that the law's individual mandate is constitutional, but even if the court disagrees, it should sever the mandate and allow the rest of the sprawling law to stand. Such a move would maintain the status quo, as the penalty associated with the mandate has been brought down to zero.

The letter marked one of the most substantive reversals the Biden administration has taken, but it did not mean the case would go away. It was originally brought by Republican attorneys general, and the Trump administration later joined on.

The challengers argued that the law's individual mandate is unconstitutional and that every other provision of the sprawling 900 page law should fall with it. California, joined by other Democratic-led states, as well as the House of Representatives, supports the law and has urged the justices to leave it in place.

The lawsuit concerned a move Congress made in 2017 to cut the penalty for those who lacked insurance to zero as part of the year-end tax overhaul. Critics raced to court arguing that the Supreme Court in 2012 had upheld the law under Congress' tax power, therefore, since the mandate is no longer tied to a specific tax penalty, it has lost its legal underpinning.

Read more about the letter and Biden's executive actions on health care here.

The Supreme Court ruled today to keep the Affordable Care Act in place, meaning the law will remain intact and millions of Americans will still have health care coverage.

Here are key things to know about the law and its impact:

Read more about ACA and the Supreme Court's ruling here.

Andy Slavitt, former acting administrator of the Centers for Medicare and Medicaid Services under the Obama administration, said the Supreme Court leaving the Affordable Care Act in place sends a message of “get this out of my court once and for all.”

"I think it's great news for people have been in a whirlwind over the last 10 years, being told to just be nervous that their coverage might be snatched from them at any moment. So Americans can rest easier," said Slavitt, former Biden White House senior adviser for Covid-19 response.

Slavitt said he has not heard directly from the President but has gotten texts from staffers.

“The definitiveness of the ruling, I think, sends a very strong message to all those folks,” he said.

She called it a "landmark victory for Democrats' work to defend protections for people with pre-existing conditions against Republicans' relentless efforts to dismantle them."

In a released statement, she added :

"Now, Democrats will continue our work to build on the transformational progress of the Affordable Care Act and make permanent the measures in the American Rescue Plan to dramatically lower the cost of health insurance premiums for people who purchase coverage on their own. For The People, we will lower health costs and prescription drug prices for all Americans.”

The Affordable Care Act remains the law of the land.

The Supreme Court's dismissal Thursday of the latest Republican-led challenge to the landmark health reform law, widely known as Obamacare, leaves in place the existing system.

The act, which has survived multiple Republican attempts to tear it down in the 11 years since it was signed, has had a sweeping impact on the nation's health care system and on the lives of tens of millions of Americans.

Roughly 31 million people have coverage thanks to the Affordable Care Act, including through the Obamacare exchanges and the expansion of Medicaid to low-income adults. The law also allows parents to keep their children on their health insurance plans until age 26 and enables patients to obtain free mammograms, cholesterol checks and birth control.

One of the law's most popular provisions is its strong protections for those with pre-existing conditions, including barring insurers from denying coverage or charging higher premiums based on people's health histories.

Nearly 54 million Americans — or 27% of non-elderly adults — have pre-existing conditions that would make them uninsurable in the individual market prior to the law, according to the Kaiser Family Foundation. As many as 133 million Americans could have been denied coverage, had their benefits delayed or curtailed or had to pay more for individual market policies because of their medical backgrounds, according to an Obama administration report.

Over the past year, as the coronavirus pandemic and resulting economic downturn have gripped the nation, the Affordable Care Act has served as a safety net for Americans who've lost their jobs — and their health insurance along with it — and for the uninsured seeking coverage. Enrollment in both the Affordable Care Act exchanges and Medicaid have risen since the outbreak began in March 2020.

Read more about ACA and the Supreme Court's ruling here.

“Let me say definitively, the Affordable Care Act has won. The Supreme Court has just ruled: the ACA is here to stay,” he said in floor remarks.

“Ever since Democrats passed the Affordable Care Act, expanding health coverage and access to tens of millions of Americans, we've had to fight tooth and nail to preserve the law from partisan Republican attacks,” he said.

Schumer added, “For more than a decade, the assault on our health care law was relentless from Republicans in Congress, from the executive branch itself, and from Republican attorneys general in the courts… Each time in each arena, the Affordable Care Act has prevailed. And once again today, the United States Supreme Court in a 7-2 ruling upheld the Affordable Care Act in the face of another legal challenge.”

www.cnn.com - 6 years ago
The Obama administration has admitted, painfully, that the recent hack of...
Read More

This swarm of robots gets smarter the more it works

www.cnn.com - 1 month ago
In a Hong Kong warehouse, a swarm of autonomous robots works 24/7. They're not just working hard, they're working smart; as they operate, they get better at their job.
Read More

Adeline Fagan, 28, died after a couple months-long battle with the virus, her family announced in a post on a GoFundMe page established on her behalf

www.cnn.com - 10 months ago
Adeline Fagan, a second year OBGYN resident living in Houston, died early Saturday after a couple months-long battle with Covid-19, her family announced in a post on a GoFundMe page established on her behalf.
Read More

Jack Hanna, beloved animal expert, stepping away because of dementia

www.cnn.com - 4 months ago
Jack Hanna, an animal and wildlife expert who became famous after his many TV appearances, is retiring from public life due to dementia, his family announced Wednesday.
Read More
More News & Articles