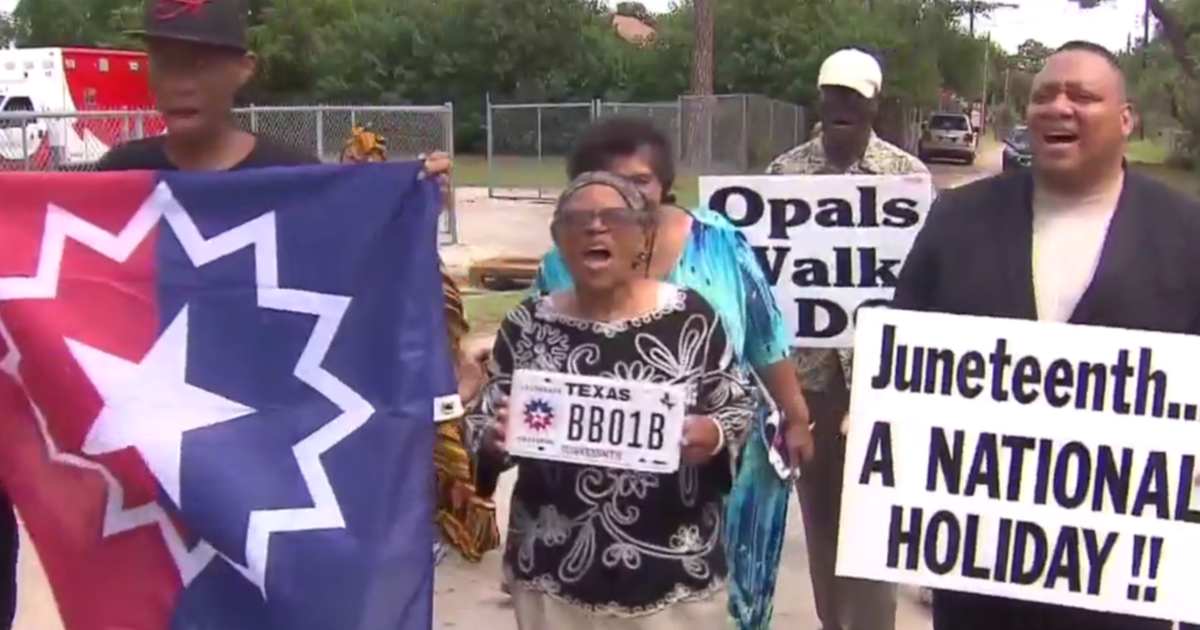 For a fiesty 93-year-old Texan named Opal Lee, the coronavirus pandemic is just another obstacle on the long road to equality. She's been traveling that road for more than nine decades, and those following in her footsteps will have her to thank if or when Juneteenth becomes a national holiday.

During the pandemic, Lee has been delivering food from her farm to families in need. But it's what she's been doing for years that's gaining momentum: Trying to make Juneteenth a federal holiday. Lee's past experiences drove her to organize a walk from her home in Fort Worth to the nation's capital, in the hopes of getting a million signatures on a Juneteenth petition.

"Slaves in Texas didn't know they were free until General Granger made his way to Galveston with troops to tell slaves they were free — but this is two-and-a-half years after the Emancipation Proclamation," Lee said.

African Americans then and now have celebrated June 19 as their Independence Day. She explained why it's so important to have a national holiday to the people who say slavery happened a long time ago.

On Juneteenth more than 80 years ago, a life-changing event occurred for Lee. When she was 13 years old, she said, a white mob burned down her family's home. She said that experience drives her to this day.

"I'm going to keep right on doing this until I know it's a holiday," she said. "And I feel it in my bones."

And she said that this time, it just feels different.

www.cbsnews.com - 3 months ago
"CBS This Morning" gets a rare, in-studio look at the last privately-owned painting by Leonardo da Vinci before it heads to auction. The portrait, "Salvator Mundi," was created about 500 years ago and thought to have been destroyed. It was long-mistaken a
Read More

www.cbsnews.com - 4 months ago
Bill Nye "The Science Guy" taught kids on his popular TV show in the '90s. Now he's hoping to reach a bigger crowd. Nye joins "CBS This Morning" to talk about his new book, "Undeniable: Evolution and the Science of Creation."
Read More

How to start new holiday traditions during an unprecedented year

www.cbsnews.com - 8 months ago
Health experts are urging families to forgo holiday traditions that include large indoor gatherings this year. But experts say there are ways to start new traditions during what may be a lonelier holiday season. Here are six tips for celebrating the
Read More
More News & Articles