Mike Thomas made a decision early in his son Justin’s life that shaped their relationship into the special form it takes today.
Author: Mark Cannizzaro
Published: 2021-06-19 11:24 pm 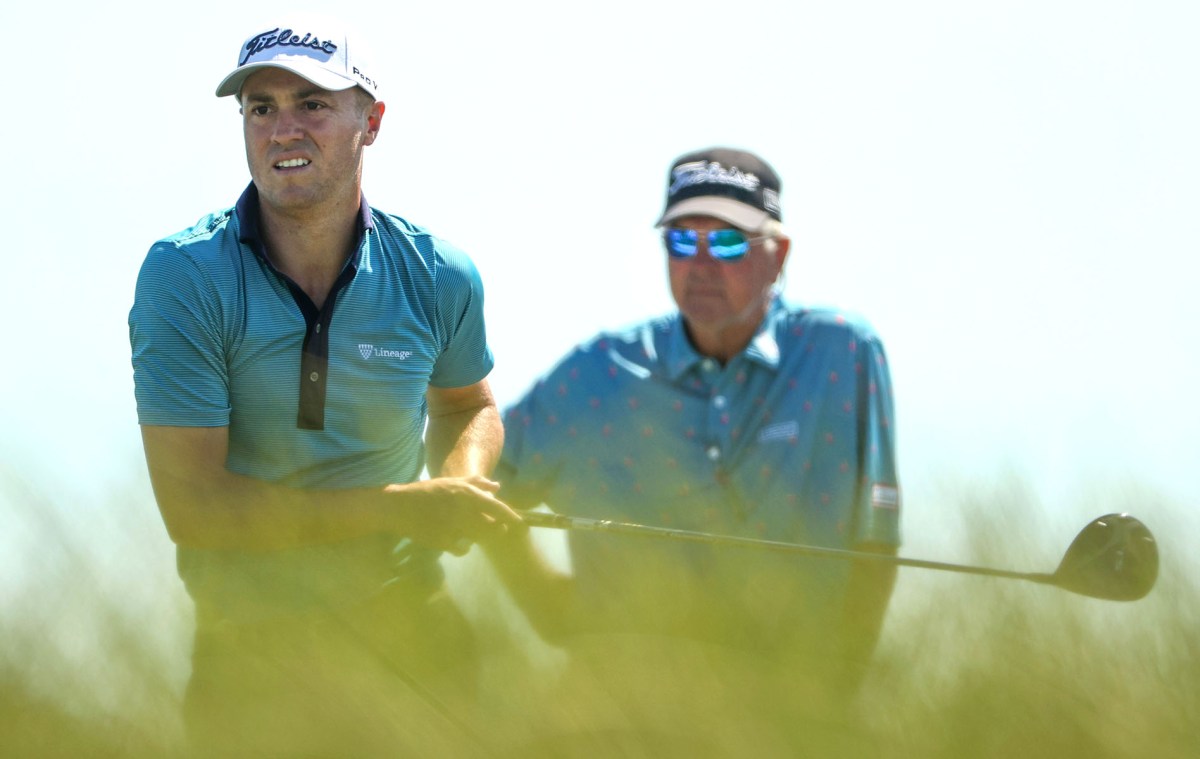 SAN DIEGO — Mike Thomas made a decision early in his son Justin’s life that shaped their relationship into the special form it takes today.

“I wanted to be Justin’s friend more than I wanted to be his father,’’ Mike Thomas told The Post while walking alongside as Justin played his U.S. Open third round Saturday at Torrey Pines. “I think that’s led a lot to the relationship that we have. I’m his friend first, his coach second and his father last.’’

Mike Thomas is the only swing coach Justin has ever had, and that dynamic has been working quite well, based on the 14 PGA Tour wins, including one major championship and this year’s Players Championship, Justin has already at age 28. On Saturday, Justin shot 71 to remain at even par entering the final round, five shots off the lead.

“He was very old-school,’’ Mike said of his father, who died at age 89 in February. “Quite honestly, my late dad would admit that he was very, very hard on me. That had a great influence on me to do the opposite with Justin, because I know I didn’t enjoy that very much and I never wanted Justin to feel the way I did.

“My dad beat me up all the time,’’ Mike went on. “I mean, he was hard on himself, so it’s only natural he was going to be hard on his students. He admitted that later on in his life.’’

Mike called the decision to do the opposite with Justin “easy,’’ though he added, “I don’t know why I came to that conclusion, because most people repeat the [parenting] cycle.’’

“Being a club pro and teacher my whole life, I’ve seen so many poor father-son dynamics that I felt bad for those kids,’’ Mike said. “I knew what they’re feeling because I went through it. I’ve seen it done wrong so many times, it was pretty easy to go in the other direction.’’

Mike Thomas deserves credit for the way he has mastered the rhythm of the relationship with his son. He’s around him all the time on the golf course during tournament weeks, yet he has deftly avoided being that stereotypical overbearing, meddling, stifling parent.

In fact, during Justin’s second year on the PGA Tour, Mike sat him down in Phoenix and asked him: “Am I out here too much? Am I out here not enough? We haven’t really discussed this. What would you like?’’

Justin’s response: “Honestly, I’d like you out here more than you’ve been out here.’’

Sunday, of course, is Father’s Day. But for Mike Thomas, every day is father’s day.

Maybe that’s why it’ll be slightly lost on him that he’ll be walking alongside as his son plays the final round of the U.S. Open on Father’s Day.

“I’m not a big occasion guy — birthdays or anything else,’’ Mike said. “It won’t really hit me that it’s Father’s Day. I’m more focused on the fact that he’s safe, he’s healthy and he’s doing something that he enjoys doing. Those are the things that matter to me. His success is kind of a bonus, really. … I probably don’t do a good enough job reflecting on what he has accomplished, because I’m so close to it.’’

Based on the evidence Justin Thomas has given us in the very public life he leads as a star in his sport, Mike and his wife, Jani, have raised a young man who tries to do the right thing.

Thomas showed his character with a recent act of kindness and compassion at the Colonial in Fort Worth, Texas, where he quietly handed a check to journeyman mini-tour player Mike Visacki to help him pay expenses to keep his dream alive.

Visacki had Monday-qualified for the Valspar in March and was captured on video calling his father in tears to tell him he’d gotten into the field. The video went viral and it moved Justin Thomas to reach out to Visacki, inviting him to play a practice round with him before the Colonial, which gave Visacki a sponsor invite.

For Mike Thomas, seeing his son author a gesture like that was as rewarding to him as watching Justin hoist a tournament trophy in victory, because that shows him that his kid gets it.

Mike looked surprisingly relaxed as he followed Justin’s round on Saturday, quietly hanging out with family and friends while sipping a can of cold beer.

“I don’t get nervous,’’ he said of watching his son compete. “Any impact I can have on the round was taken care of this morning.’’

He was referring to the pre-round practice session. But Mike Thomas’ impact on his son has reached far beyond the golf course.

That’s what friends do.

nypost.com - 8 months ago
EDINBURG, Texas — A Texas high school football player charged onto the field and bowled over a referee Thursday night, angered after being ejected from the game. Senior defensive lineman Emmanuel Duron of Edinburg High School came running from the sidelin
Read More

nypost.com - 8 months ago
Let’s start with the Giants and Seahawks for FOX Bet’s $100,000 Super Six Sunday contest. Giants at Seahawks (-10) Say what you will about the maturation and growth of Daniel Jones, but if he is healthy, this game has a totally different feel. (Or maybe i
Read More

nypost.com - 10 months ago
The Yankees couldn’t have made a louder postseason statement than they did Tuesday night when they stretched their lungs at Progressive Field. Not only did they tear into Indians starter and likely AL Cy Young Award winner Shane Bieber, they watched Gerri
Read More
More News & Articles