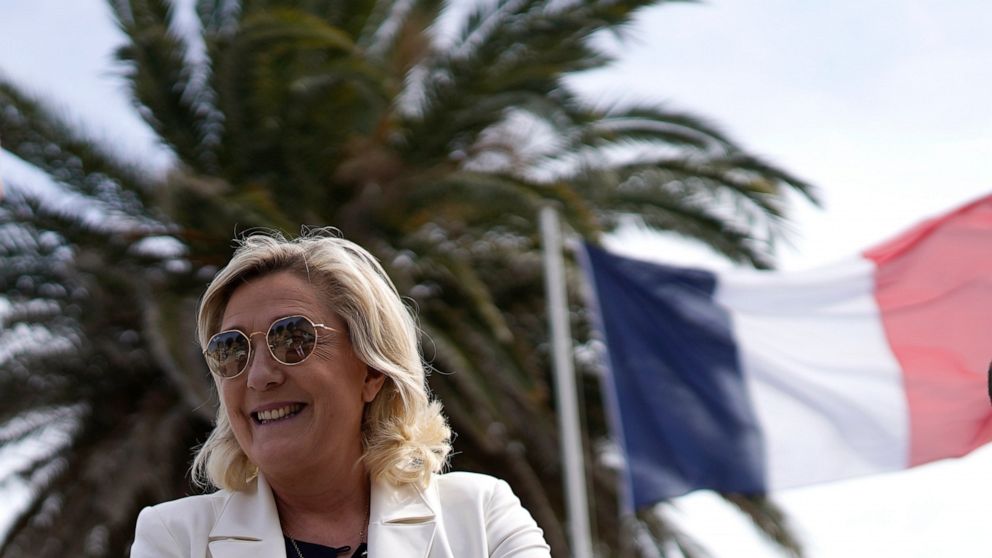 President Emmanuel Macron’s young centrist party is expected to fare poorly, lacking a strong local political base and suffering from frustration at his government’s handling of the pandemic.

Turnout in Sunday’s first round could hit a record low. Those who do show up to vote must stay masked and socially distanced and carry their own pens to sign voting registries.

The elections for leadership councils of France’s 13 regions, from Brittany to Burgundy to the French Riviera, are primarily about local issues like transportation, schools and infrastructure. But leading politicians are using them as a platform to test ideas and win followers ahead of the April presidential election. Le Pen and Macron are expected to dominate that race.

Parties that win more than 10% of the votes in Sunday’s first-round regional voting advance to the decisive runoff June 27.

Polls suggest that Le Pen’s National Rally party may win control of one or more regions, which would be a big boost for her decade-long effort to legitimize a party long seen as an anti-democratic, anti-Semitic pariah. A major question for the runoff is whether French voters will band together to keep the party out of power as they have in the past.

Traditional conservative party The Republicans looks set to keep control of several of the seven regions it currently runs, including the all-important Paris area.

Among the strongest National Rally candidates is Thierry Mariani, running to lead the region that includes Provence, the French Riviera and part of the Alps. Mariani has said he wants more police and no more public funding for groups promoting individual communities, which many see as targeting Muslim associations or LGBTQ movements.

The National Rally has racked up political victories in local elections in recent years, and has made security a top issue in this campaign. Its candidates have rallied around police unions who say they’re facing spiking violence, and called for tougher prison sentences and a moratorium on immigration — even though these fall within the powers of the state and not the regional councils.

France’s Greens party, which surged in recent elections, is hoping to gain new influence in the regional vote, while the Socialist Party may further lose ground.

Prospects look shaky for Macron’s centrist Republic on the Move party, which is just four years old and so didn’t exist the last time voters chose regional leaders in 2015. It’s facing disillusionment with Macron’s policies, including from rural voters who supported the yellow vest uprising against perceived economic injustice.

The regional elections were delayed as the virus surged.

Voters Sunday will also be choosing people to run France’s more than 100 “departements,” another layer of the country’s territorial governance system.

abcnews.go.com - 5 months ago
China’s exports surged 60.6% over a year earlier in the first two months of 2021, after factories reopened and global demand started to recover from the coronavirus pandemic
Read More

abcnews.go.com - 4 months ago
A poll has found that Palestinian President Mahmoud Abbas’ Fatah party and his militant Hamas rivals would each fall well short of a majority in parliamentary elections planned for May
Read More

abcnews.go.com - 2 months ago
Albania’s president has offered public support to a former prime minister who was sanctioned by the United States this week for corruption
Read More
More News & Articles