A name for grief that goes on and on

Stephanie Muldberg felt like she would be sad forever. She felt isolated and preferred to sit alone at home, overcome with waves of emotion -- anger, guilt and bitterness.
Author:
Published: 2018-05-16 03:34 am 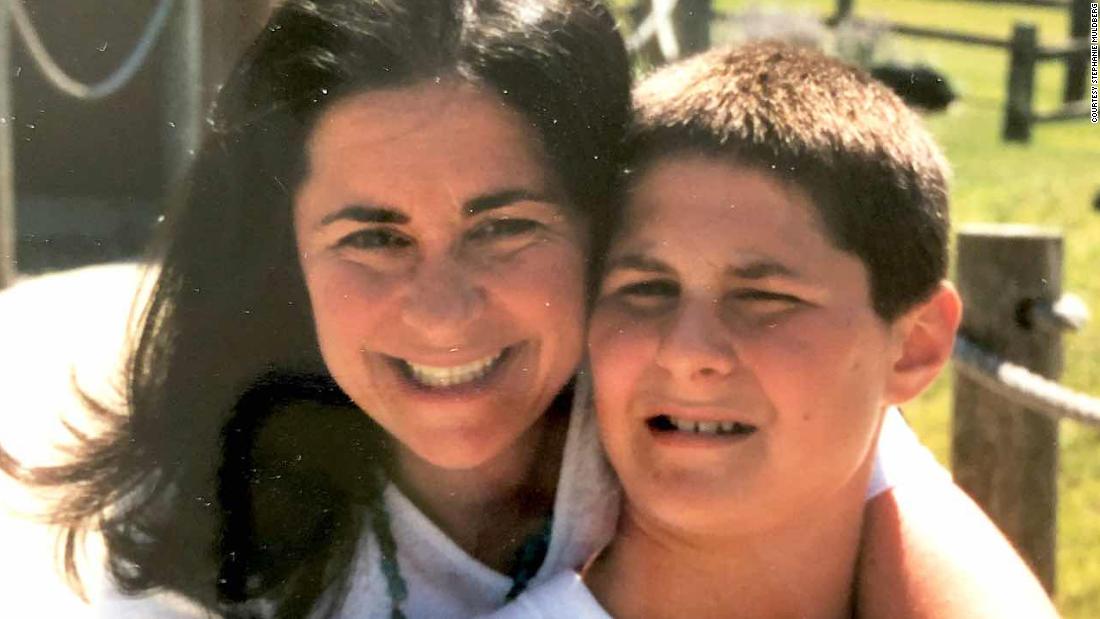 (CNN)Stephanie Muldberg felt like she would be sad forever. She felt isolated and preferred to sit alone at home, overcome with waves of emotion -- anger, guilt and bitterness.

Muldberg's 13-year-old son, Eric, died of cancer in their home in New Jersey in 2004. For years after his death, Eric dominated her thoughts. She felt guilty that she lived and he didn't. She couldn't drive past the baseball field where he used to play.

"I wasn't able to adapt to my loss," Muldberg said.

Four years passed before Muldberg, now 58, received help. She learned that there was a name for the long-lasting, intense type of grief she suffered: complicated grief.

Complicated grief can be defined as a more persistent form of intense grief in which maladaptive thoughts and dysfunctional behaviors emerge, along with continued yearning and sadness or preoccupation with thoughts of the person who died.

Yet more often than not, many people are unaware that this type of grief exists -- and that it may require short-term therapy.

The normal, painful path of grief

A study published in the journal Pediatrics in April found that among bereaved mothers who had lost a child to sudden infant death syndrome, half experienced symptoms of prolonged grief, alternatively called complicated grief, after their infants' deaths.

The study, conducted between May 2013 and July 2016, included data on 49 mothers in Cape Town, South Africa, and Pine Ridge Indian Reservation in the United States and 359 mothers across the United States, the United Kingdom, Australia, New Zealand and the Netherlands.

When it comes to SIDS, "I think it's a very important window into understanding the concerns of grief that are particular to young families," said Dr. Richard Goldstein, assistant professor of pediatrics at Harvard Medical School and director of the Robert's Program on Sudden Unexpected Death in Pediatrics at Boston Children's Hospital.

Jenna Brandt, a 40-year-old mother of four -- three who are alive and one who died -- said she would guess complicated or prolonged grief is under-reported, especially among mothers.

After her son died of SIDS in 2014, Brandt didn't show signs of complicated grief, but she said that she and her family sought counseling to help them process their grief and their loss. One of Brandt's biggest fears was that she would become a "permanently sad person" and never feel as happy again, she said.

"The most profound thing my grief counselor told me, he said, 'In any other circumstance, people would think you're going crazy, but in the circumstances you are in, in this profound loss of a child, you are not going insane. You are not crazy. This is a normal reaction. What you are feeling, how you are feeling, this tremendous loss, this anxiety, this not wanting to get out of bed, this not wanting to function, this is normal -- but it is temporary,'" said Brandt, a historical fiction author in California.

A major difference between a normal or healthy grief and a complicated or prolonged grief appears to be, in part, how long the grief continues. Another difference seems to be how much the grief symptoms interrupt daily functioning.

"What normal means is that you've come to a place of acceptance. That means that you've accepted that they've gone and you've learned to live with it, because there's no moving on," said Brandt, who now occasionally leads a grief support group at her local church.

"You don't move on. There's not a single day that goes by that I don't think about my son, that something doesn't trigger a memory of him or the pang of loss, but there is a difference between when it first happened and I literally couldn't get out of bed," she said.

Complicated grief, the only grief condition described in scientific research, has gone by many names, including prolonged grief, persistent complex bereavement, pathological grief and traumatic grief, said Dr. Katherine Shear, founder and director of the Center for Complicated Grief at Columbia University.

In and of itself, grief is natural and healthy after a loss, Shear said, but she added that what can be unhealthy is struggling with the difficulty or inability to adapt to the loss -- and when that happens, prolonged or complicated grief can develop.

In the diagnostic handbook of psychiatric disorders -- the Diagnostic and Statistical Manual of Mental Disorders or DSM -- persistent complex bereavement is listed under the category of "conditions for further study."

The handbook describes it as experiencing the death of someone with whom you had a close relationship, and since that death, symptoms of the condition occur on more days than not, to a clinically significant degree. They persist for at least 12 months for bereaved adults but six months for bereaved children.

The prevalence of prolonged or complicated grief among those who have experienced a major bereavement has been estimated at 6.7%, with some estimates pointing to 10%.

"Given this approximate prevalence and the fact that about 60% of the population has lost someone important to them, we estimate approximately 10 million people in the United States may be suffering in this way," Shear said.

Goldstein, of Boston Children's Hospital, said that his study and others contribute to awareness about the many unrecognized parents who may suffer from prolonged grief -- and how prolonged grief is different than depression or post-traumatic stress disorder.

"One aspect of depression is withdrawing from attachment figures, whereas someone with pathological grief can ruminate and seeks more proximity with those that have died," he said. "PTSD is characterized by a certain kind of intrusive fear, while the intrusions in the grief that we've been studying have more to do with yearning and emotional pain."

Treatment options for prolonged or complicated grief might include a combination of psychotherapy, behavior modifications and possibly medications, such as antidepressants for people who have clinical depression as well as complicated grief, according to Mayo Clinic.

Yet "more research is needed to specify the condition of 'persistent complex bereavement,' " said Rheeda Walker, an associate professor and licensed clinical psychologist at the University of Houston.

"Part of the challenge of grief, particularly when there is the loss of a loved one, is the expectation of what the reaction is supposed to look like and how long it's supposed to take. In my observations, people think that grieving ends once a loved one has been funeralized. That is rarely the case," she said. "What we would expect to see is a gradual progression or decrease in sadness or numbing with some seeming 'setbacks' or 'good days and bad days.' "

'People who grieve can live again'

The inability to adapt to a loss also can be described as becoming "paralyzed" in prolonged grief, said Gail Gross, a psychologist and author of the book "The Only Way Out is Through: A Ten-Step Journey from Grief to Wholeness."

"Grief is a normal response to bereavement, and everyone has their own timetable and style of grieving. You will always miss the person who died and will always experience the pain of loss. However, that pain does not have to become suffering," Gross said.

"Pain accompanies grief, and if you contract against your pain, it becomes suffering. That's when grief is unhealthy, and that's when you can get caught in PGD, prolonged grief," she said. "People who grieve can live again, vitally if they allow themselves the time to grieve."

Though Gross has not experienced any type of complicated grief, she knows the grieving process all too well. Her 24-year-old daughter, Dawn, died of cardiomyopathy with fibrosis, a heart problem, and was found dead in her apartment on April 12, 1990.

Gross wrote her book on grief as a service to others, hoping that they could benefit from her experience, and she said that for people experiencing symptoms of prolonged grief -- such as losing a sense of self or feeling suicidal -- it is important to seek professional help.

In 2008, a therapist who knew Muldberg, the New Jersey woman who lost her son, saw a presentation on complicated grief given by Columbia University's Shear.

"She waited until the end of Dr. Shear's presentation, and she went up to her, and she said she knew someone who seemed to fit the condition described in the presentation. Dr. Shear was kind enough to say, 'Well, why don't you have her call me?' " Muldberg said.

"I went in to see Dr. Shear. I filled out a lot of forms, and I filled out a form called 'The Inventory of Complicated Grief,' on which I scored incredibly high," she said. "I went in the following week, and I started a 16-session therapy."

Muldberg said the therapy helped her.

"Usually, grief is acute in the beginning, and it becomes integrated into a person's life as they adapt to the loss," Shear said.

Adapting to loss can entail accepting the reality of the death, including its finality and a changed relationship to the person who died, and seeing the possibility of feeling joy again in the future as time passes.

Muldberg now volunteers at the Center for Complicated Grief, helps run support groups and is again involved in her community and spends quality time with her family and friends.

"Grief never ends, but I've learned how to integrate it into my life," she said.

The President's dishonesty is getting worse as Election Day nears. For fact checkers, last weekend was one of the most challenging stretches of Trump's presidency.

Swimming inside the Dubai Aquarium

www.cnn.com - 12 months ago
Francis Uy is an experienced diver with a very unusual job. He cares for over 30,000 animals in the aquarium of one of the world's largest malls.
Read More

Post-Covid PTSD: The storm after the storm

www.cnn.com - 7 months ago
At first, the thermometer read 101. But when Ricardo Ramirez arrived in the emergency department it just kept rising. He began pleading for his life, begging the fully gowned, gloved, and masked strangers to give him something to stop it.
Read More

www.cnn.com - 9 years ago
A mother who recently died of a rare heart condition lives on through a YouTube...
Read More
More News & Articles