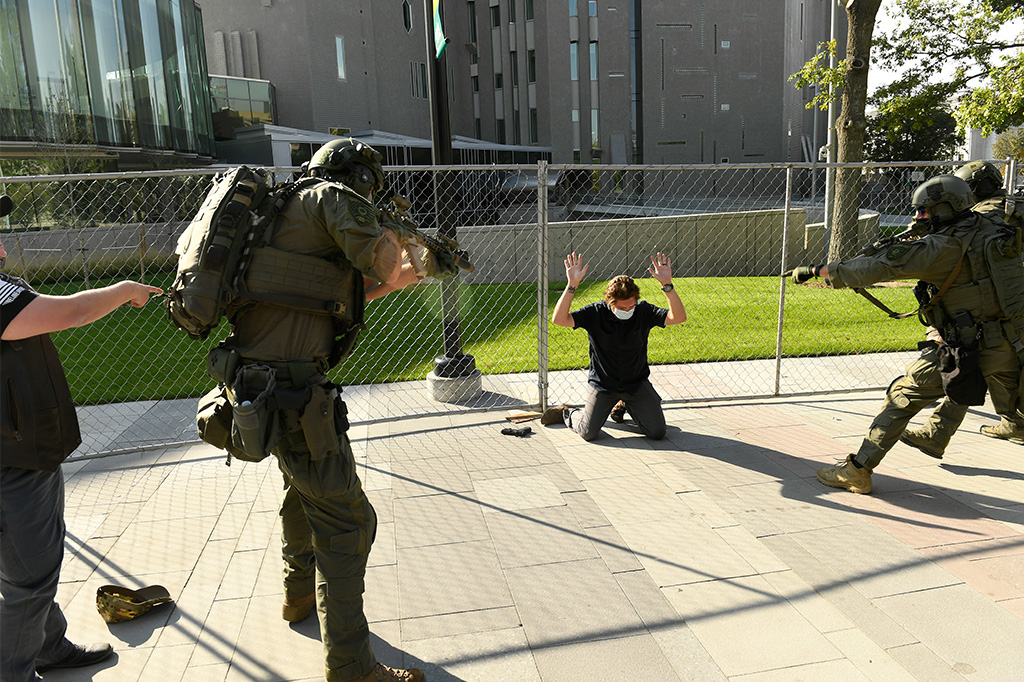 The clip, published by the Daily Mail, shows the deadly gunshot being fired and police immediately rushing to arrest the suspect, who drops a handgun as he kneels to the ground with his hands up.

The tragedy unfolded just outside the Denver Art Museum after participants in a “Patriot Rally” mixed it up with counter-demonstrators from a Black Lives Matter response event, the Denver Post reported.

The stunning video shows one attendee arguing with BLM members.

That attendee then appears to mace or pepper-spray the security guard — who had been hired by NBC affiliate 9NEWS to protect its reporters who were covering the event, the station reported.

It is unclear which side of the protest — conservative or BLM — the victim had belonged to, the Denver Post said.

Both the victim and the guard who allegedly shot him were white.

Police said the security guard will be charged with homicide.

The dueling rallies were held at the city’s Civic Center, with right-wing protesters chanting patriotic songs and giving speeches, according to the Denver Post.

nypost.com - 3 weeks ago
In the previous six matchups before Tuesday’s 3-1 win over the Sabres, the Rangers grappled with finishing games rather than getting off to strong starts.
Read More

nypost.com - 5 months ago
A group of attackers pummeled a woman and spewed anti-Asian statements because she wasn’t wearing a mask on a Manhattan train last week, cops said Thursday. The 32-year-old woman was riding an A train at the West 4th Street station around 1:45 p.m. Dec.
Read More

‘He came out of nowhere’: Victim of caught-on-video Midtown attack

nypost.com - 1 month ago
A 73-year-old man told The Post from his hospital bed Sunday how he was pummeled out of the blue in a caught-on-video assault in Midtown. “I never actually seen him come at me,” victim Regis Moore said at Mt. Sinai Morningside Hospital, referring to his
Read More

nypost.com - 3 months ago
The United Nations’ human rights body is investigating newly released videos in which a daughter of Dubai’s ruler claims to be held “hostage” — while the UK on Wednesday demanded proof that she is still alive. Sheikha Latifa bint Mohammed Al Maktoum, 35,
Read More
More News & Articles