More than 1,000 demonstrators have gathered around one of Haiti’s most notorious gang leaders to commemorate slain President Jovenel Moïse
Author:
Published: 2021-07-26 03:40 pm 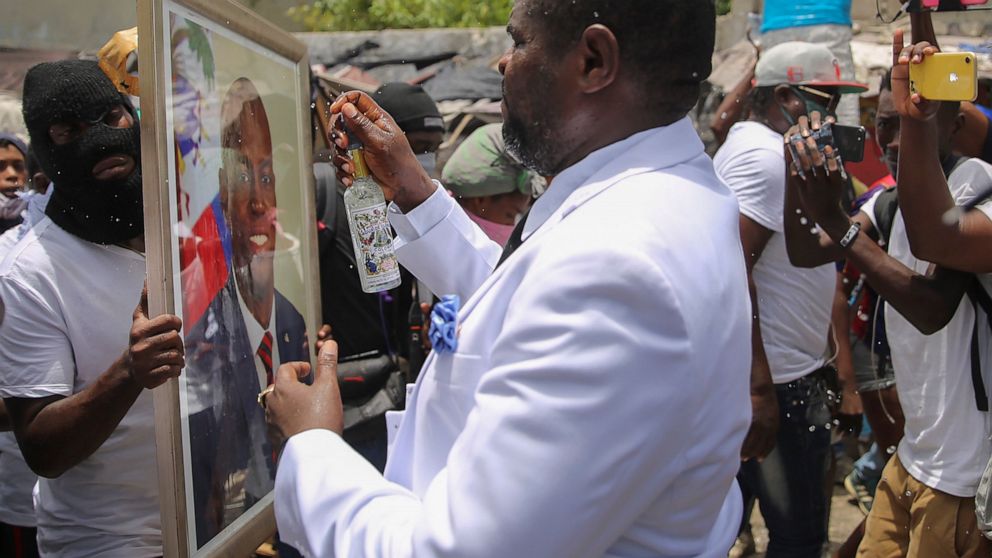 PORT-AU-PRINCE, Haiti -- More than 1,000 demonstrators gathered around one of Haiti's most notorious gang leaders on Monday to commemorate slain President Jovenel Moïse.

The crowd was mostly dressed in white as they cheered on Jimmy Cherizier, a former police officer who now leads “G9”, a federation of nine gangs whom officials have blamed for a spike in violence and kidnappings in recent months.

“Everyone needs to wait on my order before we respond to the killing of Jovenel Moïse,” said Cherizier, who goes by the name of “Barbecue" and whom police say is behind several recent massacres that targeted civilians living in communities run by other gangs.

He was wearing a white suit and black tie as he spoke to the crowd at the seaside slum of La Saline in the capital of Port-au-Prince. A nearby truck played music as Cherizier knelt down before a large portrait of Moïse and began to light candles.

Earlier, the crowd sang as they made a circle around a bonfire and threw salt into it as part of a ceremony to honor Moïse. Many had their faces covered so as not to be identified.

Moïse was shot several times during a July 7 attack at his private home in which his wife was seriously injured. At least 26 people have been arrested, including 18 former Colombian soldiers. Police are still looking for various suspects including a former rebel leader and an ex-Haitian senator.

abcnews.go.com - 8 months ago
Indonesian rescuers have retrieved more bodies from the rubble of homes and buildings toppled by a 6.2 magnitude earthquake, raising the death toll to 56
Read More

abcnews.go.com - 1 year ago
Joe Biden says the police officer in Kenosha, Wisconsin, who shot Jacob Blake in the back on Aug_ 23, leaving the 29—year-old Black man paralyzed, “needs to be charged.”
Read More

WATCH: Trump on ABC News town hall: Trump responds to question about path to US citizenship

abcnews.go.com - 1 year ago
Flor Cruceta asked the question on behalf of her mother who died from COVID-19. They both immigrated from the Dominican Republic and had recently become U.S citizens in order to vote in the election.
Read More
More News & Articles