What You Need to Know About Amy Coney Barrett's Views

As an appeals court judge, Judge Barrett has issued opinions that have reflected those of her mentor, Justice Antonin Scalia, but with few of his occasional liberal rulings.
Author: Adam Liptak
Published: 2020-10-12 12:00 am 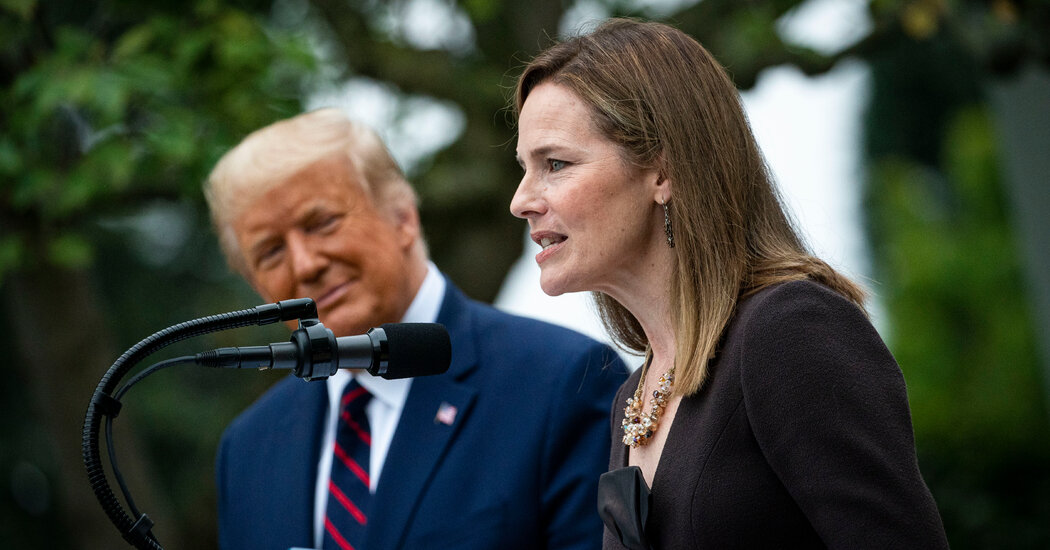 WASHINGTON — Judge Amy Coney Barrett, President Trump’s pick for the Supreme Court, has compiled an almost uniformly conservative voting record in cases touching on abortion, gun rights, discrimination and immigration. If she is confirmed, she would move the court slightly but firmly to the right, making compromise less likely and putting at risk the right to abortion established in Roe v. Wade.

Judge Barrett’s judicial opinions, based on a substantial sample of the hundreds of cases that she has considered in her three years on the federal appeals court in Chicago, are marked by care, clarity and a commitment to the interpretive methods used by Justice Antonin Scalia, the giant of conservative jurisprudence for whom she worked as a law clerk from 1998 to 1999.

But while Justice Scalia’s methods occasionally drove him to liberal results, notably in cases on flag burning and the role of juries in criminal cases, Judge Barrett could be a different sort of justice.

“There may be fewer surprises from someone like her than there were from Justice Scalia,” said Brian T. Fitzpatrick, a former law clerk to the justice and a law professor at Vanderbilt University. “She is sympathetic to Justice Scalia’s methods, but I don’t get the sense that she is going to be a philosophical leader on how those methods should be executed.”

One area in which almost no one expects surprises is abortion. Mr. Trump has vowed to appoint justices ready to overrule Roe v. Wade, the 1973 decision that established a constitutional right to abortion. Groups opposing abortion have championed Judge Barrett’s nomination. And her academic and judicial writings have been skeptical of broad interpretations of abortion rights.

Judge Barrett will doubtless tell senators that the Roe decision is a settled precedent, as she did when Mr. Trump nominated her to the appeals court in 2017. And the Supreme Court may not hear a direct challenge to Roe anytime soon, preferring instead to consider cases that could chip away at abortion rights.

But when the day comes, many of Judge Barrett’s supporters are convinced that she will not flinch. Justice Scalia wrote that the Constitution has nothing to say about abortion and that states should be allowed to decide the question for themselves. There is no reason to believe Judge Barrett disagrees.

Overruling a major precedent is no small undertaking, of course. But Judge Barrett has indicated that some precedents are more worthy of respect than others.

In a 2013 law review article, she examined the role of the doctrine of stare decisis, which is Latin for “to stand by things decided” and is shorthand for respect for precedent. The doctrine is, Judge Barrett wrote, “not a hard-and-fast rule in the court’s constitutional cases,” and she added that its power is diminished when the case under review is unpopular.

“The public response to controversial cases like Roe,” she wrote, “reflects public rejection of the proposition that stare decisis can declare a permanent victor in a divisive constitutional struggle.”

Professor Fitzpatrick said he was certain of one thing. “I’m sure she thinks that Roe v. Wade is not a well-reasoned Supreme Court decision,” he said. “The hard question is whether she would be willing to overturn it.”

Should Judge Barrett succeed Justice Ruth Bader Ginsburg, Republican appointees would outnumber Democratic ones by a 6-to-3 margin, and, based on their voting records, Justice Brett M. Kavanaugh, another Trump nominee, could replace Chief Justice John G. Roberts Jr. as the swing vote.

“He certainly is not going to want to be in dissent with the three liberals,” said David A. Strauss, a law professor at the University of Chicago.

The chief justice has the power to assign the majority opinion, to himself or to an ally, but only when he is in the majority. To keep that power, he would have good reason to tack right.

“Between the assignment power and how good he is at writing opinions,” Professor Strauss said of the chief justice, “he can push decisions to be more to his liking in the majority than if he were writing a dissent.”

In the coming weeks, months and years, the Supreme Court may be called upon to weigh issues as varied and weighty as the presidential election, the fate of affirmative action, the structure of the administrative state and the role courts can play in addressing climate change. Judge Barrett had not written major opinions in any of those areas, and, in any event, the views expressed by appeals court judges do not always predict their positions when they are elevated to the Supreme Court.

Here is a look at some of Judge Barrett’s views in major cases on the United States Court of Appeals for the Seventh Circuit and what they suggest about her impact if she is confirmed.

Judge Barrett has considered three laws restricting abortions from her home state, Indiana. In all three cases, she expressed misgivings about earlier rulings from appeals judges that had struck down the laws.

In one case, her court let stand a ruling that threw out a law tightening the requirements for notifying the parents of minors seeking abortions. Judge Barrett was on the losing side, joining an opinion that the ruling was premature and that the law should have been allowed to go into effect to assess its actual impact.

Citing the “unsettled status of pre-enforcement challenges in the abortion context,” the opinion called on the full court to address the question. “Preventing a state statute from taking effect is a judicial act of extraordinary gravity in our federal structure,” the opinion said.

Justice Kavanaugh also took issue with such pre-enforcement challenges in a dissent in the Supreme Court’s most recent abortion case, which struck down a restrictive Louisiana law. In July, the Supreme Court sent the Indiana case back to the appeals court for reconsideration in light of the one from Louisiana.

Judge Barrett also joined a 2018 dissent concerning two other Indiana laws, one banning abortions sought solely because of the sex or disability of a fetus and the other requiring abortion providers to bury or cremate fetal remains. Both had been blocked by a three-judge panel.

“None of the court’s abortion decisions holds that states are powerless to prevent abortions designed to choose the sex, race and other attributes of children,” the dissent said. It added that the fetal remains law was entirely rational. “The panel has held invalid a statute that would be sustained had it concerned the remains of cats or gerbils,” the dissent said.

In 2019, the Supreme Court turned down the state’s appeal on the first law and upheld the fetal remains law.

During her confirmation hearings for the Seventh Circuit, Judge Barrett repeatedly insisted that a judge should not impose her personal convictions on the law. She also said several times that as an appeals court judge, she would follow Supreme Court precedent on abortion.

On Nov. 10, a week after Election Day, the Supreme Court will hear arguments on the latest challenge to the Affordable Care Act. If Mr. Trump and Senate Republicans have their way, Judge Barrett will be on the bench to hear the case.

Since Chief Justice Roberts joined the court’s four-member liberal wing to reject efforts to dismantle the law, the latest challenge appeared to have little chance of success while Justice Ginsburg was alive. Judge Barrett’s presence would add uncertainty, though many legal experts say that the challengers’ arguments, supported by the Trump administration, are more creative than convincing.

In a 2017 law review article written before she joined the appeals court, Judge Barrett was critical of Chief Justice Roberts’s 2012 opinion sustaining a central provision of the health care law. “Chief Justice Roberts pushed the Affordable Care Act beyond its plausible meaning to save the statute,” she wrote.

The new case was brought by Republican state officials, who argued that when Congress in 2017 zeroed out the penalty for failing to obtain health insurance, lawmakers doomed the entire law. Judge Barrett’s views on those arguments are unknown.

In a 2019 dissent, Judge Barrett said she would have limited the sweep of a federal law forbidding people with felony convictions from owning guns. She drew on originalism, a legal theory championed by Justice Scalia that seeks to interpret the Constitution as it was originally understood.

But she appeared to have gone further than her former mentor, the author of the 2008 majority opinion in District of Columbia v. Heller, which established an individual right to own guns for self-defense in the home. “Nothing in our opinion,” Justice Scalia wrote, “should be taken to cast doubt on longstanding prohibitions on the possession of firearms by felons.”

In her dissent, Judge Barrett wrote that the law forbidding people with felony convictions from owning guns should not apply when the crimes at issue were nonviolent.

The Supreme Court has provided little guidance on the scope of the right to bear arms since the Heller decision. The four most conservative justices on the current court have written that they are eager to return to the subject, particularly given their view that many lower courts have treated gun rights as second-class rights.

In 1998, writing with John H. Garvey, now the president of Catholic University of America, Judge Barrett suggested that Catholic judges should recuse themselves in some death penalty cases that might conflict with their religious beliefs.

At her 2017 confirmation hearing, she said that “I would recuse myself and not actually enter the order of execution” were she a trial court judge in a death penalty case. But she noted that she had assisted Justice Scalia in capital cases as a law clerk.

On the Seventh Circuit, she has voted to allow executions to proceed.

Justice Stephen G. Breyer, joined by Justice Ginsburg, had urged their colleagues to reconsider the constitutionality of the death penalty. That project gained no traction, and the court’s conservative majority has shown impatience with many appeals from death row inmates.

Though Judge Barrett apparently has some reservations, there is no reason to think the court will change course on its support for capital punishment.

Writing for a unanimous three-judge panel last year, Judge Barrett revived a lawsuit from a student who had been suspended by Purdue University after a school discipline program found that he had committed sexual violence. “Purdue’s process,” she wrote, “fell short of what even a high school must provide to a student facing a days-long suspension.”

In a lengthy dissent in June, she said she would have overturned a trial court ruling blocking the Trump administration’s efforts to tighten the “public charge” rule, which allows officials to deny permanent legal status, also known as a green card, to immigrants who are likely to need public assistance.

“Litigation is not the vehicle for resolving policy disputes,” she wrote.

www.nytimes.com - 2 months ago
Ms. Zaghari-Ratcliffe, a British-Iranian dual citizen, who was released from detention last month, was handed the sentence and a one-year travel ban on new charges of “propaganda activities.”
Read More

Bringing Out the Best of Sondheim, Herman and … Schraubstader?

www.nytimes.com - 4 months ago
Two researchers are on trial for writing that a Polish mayor was complicit in a massacre. Critics say the government is trying to emphasize Polish suffering in World War II and downplay complicity in Nazi crimes.
Read More

www.nytimes.com - 2 months ago
Georgia’s new voting law has to be understood in its own peculiar historical context.
Read More
More News & Articles