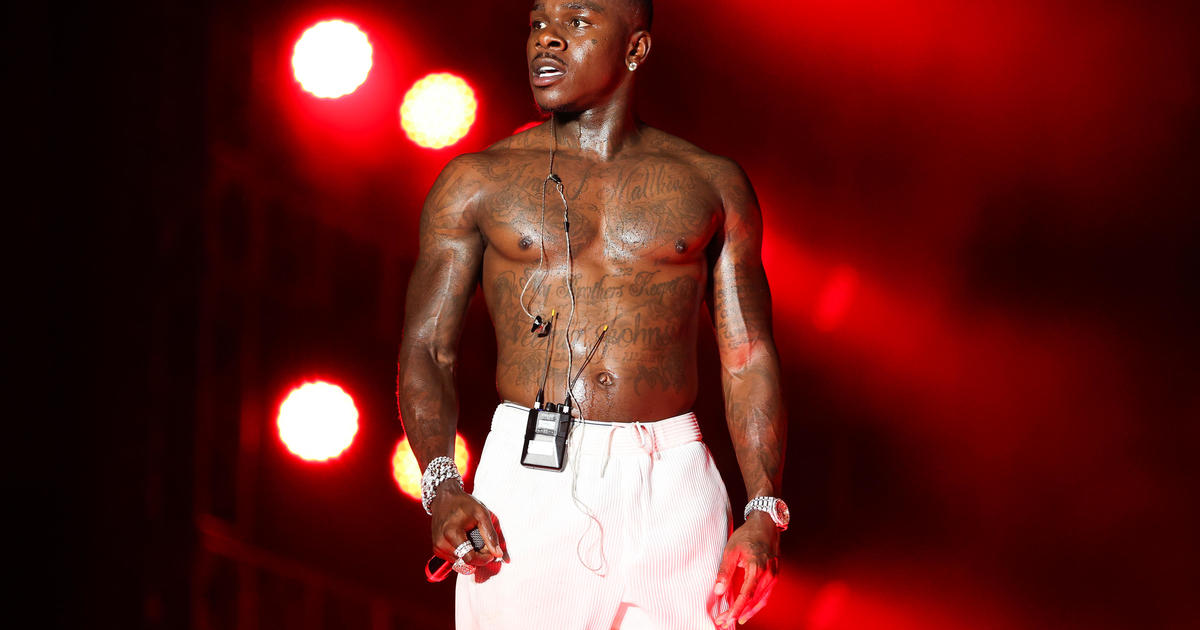 Grammy-nominated rapper DaBaby apologized Wednesday for comments he made about people living with HIV/AIDS at the Rolling Loud music festival last weekend. The 29-year-old rapper was criticized by activists, fellow musicians and fans after a now-viral video showed him telling the crowd, "If you didn't show up today with HIV/AIDS, or any of them deadly sexually transmitted diseases that'll make you die in two to three weeks, then put your cell phone light up."

DaBaby also asked for men in the crowd who did not perform oral sex on another man in the parking lot to raise their phones.

On Monday, the rapper defended his actions. Two days later, he said fans "digested" his comments the wrong way, but also apologized for his "insensitive" remarks on HIV/AIDS.

"I tell fans to put a cellphone light in the air y'all start a million man March," he tweeted. "I told you y'all digested that wrong but I ain't gone lie I'm impressed. Now show this same amount of support when a racist cop kill one of our black a**…YA NOT."

"Anybody who done ever been effected by AIDS/HIV y'all got the right to be upset, what I said was insensitive even though I have no intentions on offending anybody. So my apologies," he said in a subsequent tweet. "But the LGBT community... I ain't trippin on y'all, do you. y'all business is y'all business."

Approximately 1.2 million Americans have HIV, according to the most recent CDC data. While there is no cure, proper medical treatment can slow or prevent progression of the disease.

George M. Johnson, activist and author of "All Boys Aren't Blue," told CBS News that they were hurt by DaBaby's comments, especially the false assertion that having HIV/AIDS will quickly lead to death.

"I haven't heard that particular type of violence in a long time," Johnson said. "Especially someone with such a large platform within hip-hop. It was tough to process the words that he was saying."

DaBaby's comments drew backlash from across the industry. Dua Lipa, a pop star who has collaborated with DaBaby, said she was "surprised and horrified." Elton John tweeted that "Homophobic and HIV mistruths have no place in our society."

Johnson said they believe DaBaby's comments are linked to the rising prominence of Lil Nas X, a rapper who has been vocal about his LGBTQ identity.

"When culture starts to make shifts to become pro-women or pro-LGBT, that's typically when you see the most push back, harmful, abusive and violent language coming back against the community as cis-heterosexual men try to retain power," Johnson said.

"Rappers like DaBaby are leaning into the old tropes of hip-hop which have always been homophobia and misogyny. The harder you lean into homophobia or misogyny the more respect you get. Now with more queer visibility that's not going to work anymore," Johnson added. "Too many people know queer people."

What's behind tensions between the black community and police?

www.cbsnews.com - 1 year ago
CBS News correspondent Jericka Duncan joins CBSN from Louisville, where the city has reached a $12 million wrongful death settlement with Breonna Taylor's family. No charges have been brought so far against the police officers involved in the fatal
Read More

When should kids get their own smartphones?

www.cbsnews.com - 6 months ago
As children head back to school, parents face the dilemma of deciding whether it's time to get them a smartphone, and if so, how to make sure they use it responsibly. Brian Webb reports.
Read More

www.cbsnews.com - 7 months ago
Eric Burton and Adrian Quesada of the Austin-based band Black Pumas are up for three Grammys this year, including Album of the Year for their self-titled debut album, and Record of the Year for "Colors." They talk with Anthony Mason about their rise to
Read More
More News & Articles