Baby barred by travel ban now recovering after surgery in US

The uncle of an Iranian baby ensnared in President Trump's travel ban settled on one word Monday to express gratitude to everyone who helped his niece get to the United States for a life-saving heart medical procedure.
Author:
Published: 2017-02-27 07:59 pm 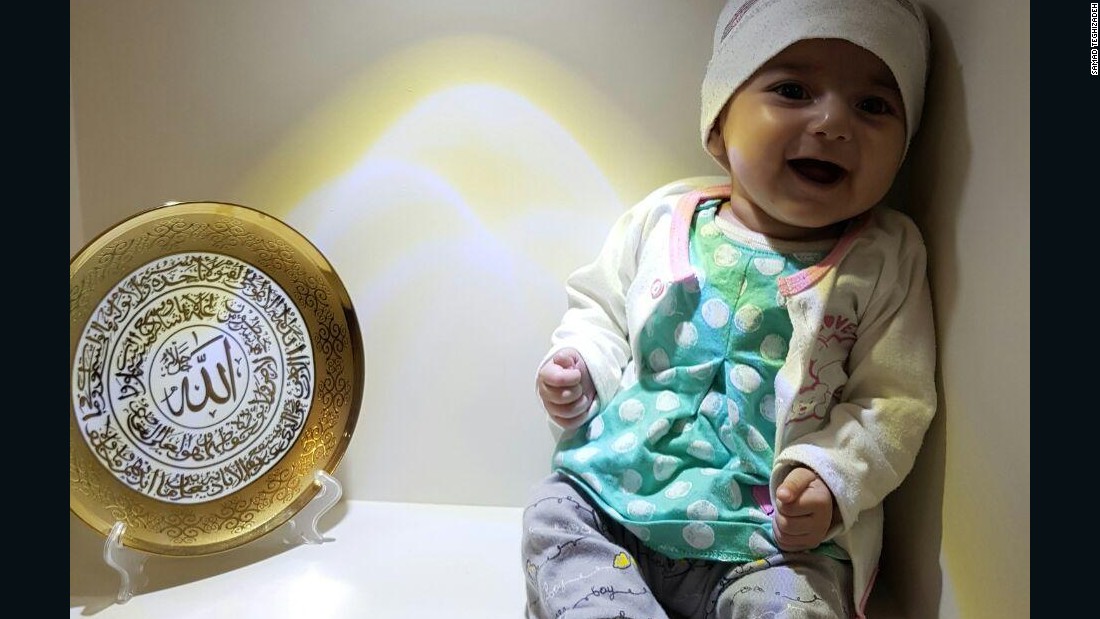 (CNN)The uncle of an Iranian baby ensnared in President Trump's travel ban settled on one word Monday to express gratitude to everyone who helped his niece get to the United States for a life-saving heart medical procedure.

The 4-month-old underwent surgery to repair a life-threatening heart defect on February 17, nine days after arriving at the hospital. She was in the intensive care unit Monday and was on the mend, doctors said.

Doctors declined to reveal details of the surgery at the family's request.

"We're really pleased with how the surgery went, and have a very strong sense at this point she is going to recover fully and go on to lead a happy and healthy life," said Dr. Laurie Armsby, interim head of the hospital's division of pediatric cardiology, who joined doctors and Teghizadeh at a news conference.

Fatemeh became one of the faces of the dozens of foreign nationals caught up in the president's January 27 executive order that barred travel from seven Muslim-majority countries for 90 days.

One of those countries is Iran.

In January, doctors in Tehran told Fatemeh's family that she had structural abnormalities and two holes in her heart.

The family lacked the resources to treat the infant.

Her parents later boarded a flight to Dubai, United Emirates, but they were rerouted back to Iran and told to apply for a US Visa in 90 days.

The family was scheduled meet with doctors in Portland on February 5, but Trump's order prevented them traveling, according to Teghizadeh.

The order, which had barred citizens from the seven countries from entering the United States for 90 days and all refugees for 120 days, has been entangled in the courts. Three weeks ago, a three-judge panel in the Ninth Court of Appeals ruled against reinstating the travel ban for now.

The White House is expected to release a new version of its travel ban soon. The new ban is expected to stay clear of some of the legal potholes the first one hit.

Immigration attorneys contacted the State Department to help Fetemeh's family obtain a waiver to navigate the ban. Her family reached out to office of Sen. Jeff Merkley, D-Oregon.

State and federal officials intervened. Several congressional Democrats from Oregon, including Merkley, asked Secretary of State Rex Tillerson to grant Fatemeh and her parents a waiver.

Doctors at OHSU agreed to waive their fees, and the hospital pledged to ensure that most of the surgery was covered.

"I think Fatemeh's case is one of generosity and compassion on a great number of individuals," Jennifer M. Morrisey, a Portland immigration attorney who represents the family said Monday, noting that Fatemeh and her family were granted waivers to travel.

She added: "And I hope that we'll see other cases of that kind of compassionate concern coming forward in the times to come in the immigration realm," she said.

Surgery was an 'all-day affair'

A ventricular septal defect (VSD) is a common heart defect present at birth due to an abnormal connection between the ventricles or lower chambers of the heart, according to the Mayo Clinic.

The infant's initial diagnosis also indicated that she also had other heart complications, including an atrial septal defect -- a "hole" in the wall that separates the top two chambers of the heart.

Armsby added: "The surgery was a little bit more complicated based on the number and nature of the holes in her heart."

Thanks to 'Uncle Sam'

Dr. Dana Braner, chief physician at the hospital, said he couldn't say how long Fetemeh's recovery would take because every case is different.

He called Teghizadeh "Uncle Sam," and thanked him for helping to set up the trip.

Teghizadeh said the kindness of others surprised him -- and Fatemeh's family.

"In the beginning, I didn't have any hope," he said.

Teghizadeh, an American citizen, lives in Portland with his parents -- Fatemeh's grandparents -- who also are US citizens. He said he proud to be a citizen.

He said he struggled to find the right words to express his gratitude because English is not his frist language.

Teghizadeh rattled a list of thank you's, including to Merkley, who he said called him twice, and lawmakers who wrote the letter to Tillerson.

He called the hospital staff "fantastic." He thanked his fellow Oregonians and called the state amazing.

"And I'm going to stay here forever," he said of Oregon.

CNN's Ariane DeVogue and Laura Jarrett contributed to this report.

Opinion: Impending doom? We can avoid it

www.cnn.com - 1 month ago
Thank God for vaccines. The Biden administration's mass vaccination campaign comes just as spring brings warmer weather and longer days, fueling a sense of broad optimism for many across the United States. On weekend nights, cities like New York are again
Read More

www.cnn.com - 4 weeks ago
The White House said President Joe Biden will set a new, increased refugee cap in May after facing a barrage of criticism when officials confirmed to CNN and other outlets that it would remain at the historically low level set by former President Donald
Read More

www.cnn.com - 3 years ago
Everyone seems to agree that opposites attract. Young and old people, happy and distressed couples, single folks and married partners -- all apparently buy the classic adage about love.
Read More