Jason Garrett spent 12 years in the NFL, almost exclusively as a backup quarterback. There is something he did not do, ever, but Daniel Jones did.
Author: Paul Schwartz
Published: 2021-08-05 10:41 pm 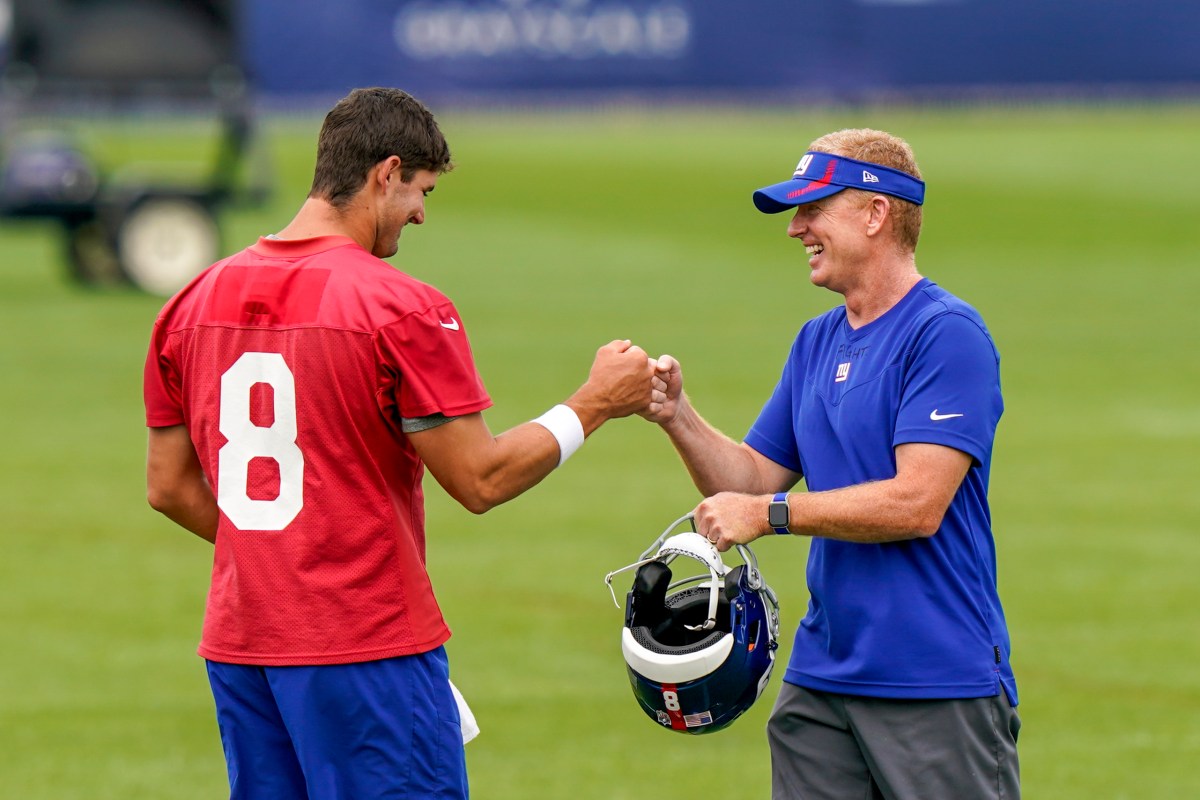 Jason Garrett spent 12 years in the NFL, almost exclusively as a backup quarterback. There is something he did not do, ever.

“I never jumped into a fight like that, absolutely not,’’ Garrett said Thursday.

“Like that’’ is the way Daniel Jones got in the middle of the action during a wild altercation near the end of Tuesday’s practice, where some pushing and shoving led to a mass of bodies and somehow Jones ending up at the bottom of the pile. That is no place for the starting quarterback.

Garrett, entering his second year as the Giants offensive coordinator, does not advocate such aggressive tendencies in Jones. But, in a way, he kinda, sorta liked it.

Jones as a fighter is fine. Now the Giants need to turn Jones into a winning quarterback. To do so, the front office signed Kenny Golladay in free agency and selected Kadarius Toney in the first round of the draft, adding talent and dynamism at wide receiver. Saquon Barkley returns following reconstructive knee surgery. Now it is up to Jones, and also up to Garrett, who directed the NFL’s No. 31 scoring offense last season.

Before coming to the Giants, Garrett spent 10 years as the Cowboys head coach, running his offense. He brought that system to the Giants, but weaknesses on the offensive line, the absence of Barkley, and Jones battling through his first year with a new playbook hampered the productivity. The Giants were in the bottom half of the league in using pre-snap motion, and critics point to this as a reason for the offensive failures.

Garrett does not agree.

“Yeah, motion is obviously, if you’ve followed our offenses through the years a big part of what we’ve done,’’ Garrett said. “Last year we ran a lot more of the no-huddle stuff, we were on the line of scrimmage, where you don’t run as much motion, you’re using tempo, sometimes you want fast, sometimes you want slow. We weren’t in the huddle as much last year. I don’t know if you guys could see that on TV, but that was one of the things we did. Motion and shifting and movement and all that stuff are a big part of what we’ve done in the past and if we feel like it applies to a particular game plan we’ll certainly use it.’’

The “I don’t know if you guys could see that on TV’’ could have been acknowledgment that the media often watched games on television during the pandemic. Or, it could have been a thinly veiled shot at those who disapprove of his methods in 2020.

Either way, the Giants need to score more points in 2021 and Garrett is tasked with making it happen. Players returning to his system for a second year should help.

“I think any time you’re exposed to something more hopefully, if you go about it the right way, you’re going to respond more favorably to that next experience,’’ Garrett said. “All those guys who have been around have a year under their belt in this system and they come back the next year and it’s ‘I remember that, I understand what you’re saying’ or ‘I’ve been in that situation before.’’’

Golladay continues to receive treatment for a hamstring injury that is expected to keep him off the field for 2-3 weeks. Coach Joe Judge did not offer any date for a return, saying he did not want to “create some kind of fabricated timetable for people in the public.’’

TE Kyle Rudolph, coming off foot surgery, has taken much of his rehab inside after working outdoors earlier in camp.

G Shane Lemieux (knee) was able to participate in the slow-paced walk-through practice.

The Giants had two veteran players, OL Joe Looney and LB Todd Davis, retire this week, only days after signing with the team. If they opt to play again, there could be a place for them on the roster.

“In the brief time we had both of them, they both made strong impressions,’’ Judge said. “These are tough decisions on guys. As you get vets later in their career, they started training camp, it’s not uncommon for this to happen. Now, you don’t want it to happen, but you have to respect the decision each person makes for their family.I’d say in both these cases, not to speak for the players, but both of them had family situations that they had to attend to, and that was a large part of the decision.

“I think both guys could’ve helped us. We left the door open for both guys based on what may open up in the future.’’

Rich kid ‘rioters’ are ignorant about the poor working class

nypost.com - 1 year ago
Across the country, pampered children of the overclass are taking part in the vandalization, looting and burning of businesses, many of which are owned by immigrants and members of minority groups, under the guise of championing the Black Lives Matter
Read More

Nets give title-thirsty fanbase glimpse of what could be

nypost.com - 8 months ago
After this most enjoyable basketball evening at Barclays Center, there are two things that ought to be abundantly clear about the Nets. It really is amazing what a little elbow grease can yield. If this ever becomes the new normal around Brooklyn … oh my.
Read More

MLB ‘pressing ahead’ to host fans for NLCS, World Series

nypost.com - 1 year ago
There may be fans in the MLB playoffs. At least that’s commissioner Rob Manfred’s plan for the NLCS and World Series despite the games not being played at the home parks of teams that advance that far. “We are pressing ahead to have fans in Texas,” he tol
Read More

nypost.com - 1 year ago
SAN JOSE – Researchers in Costa Rica are due to begin trials of an inexpensive coronavirus treatment based on antibodies taken from horses injected with the SARS-Cov-2, the virus that causes COVID-19, according to scientists. Developed by University of
Read More
More News & Articles