The re-emergence of charming 'little wine holes' in Florence

Bars and restaurants around the world are having to rethink the way they interact with customers during the pandemic. In the Italian city of Florence, some are looking to the past: using centuries-old wine windows to dole out food and drinks.
Author:
Published: 2020-08-11 02:54 am 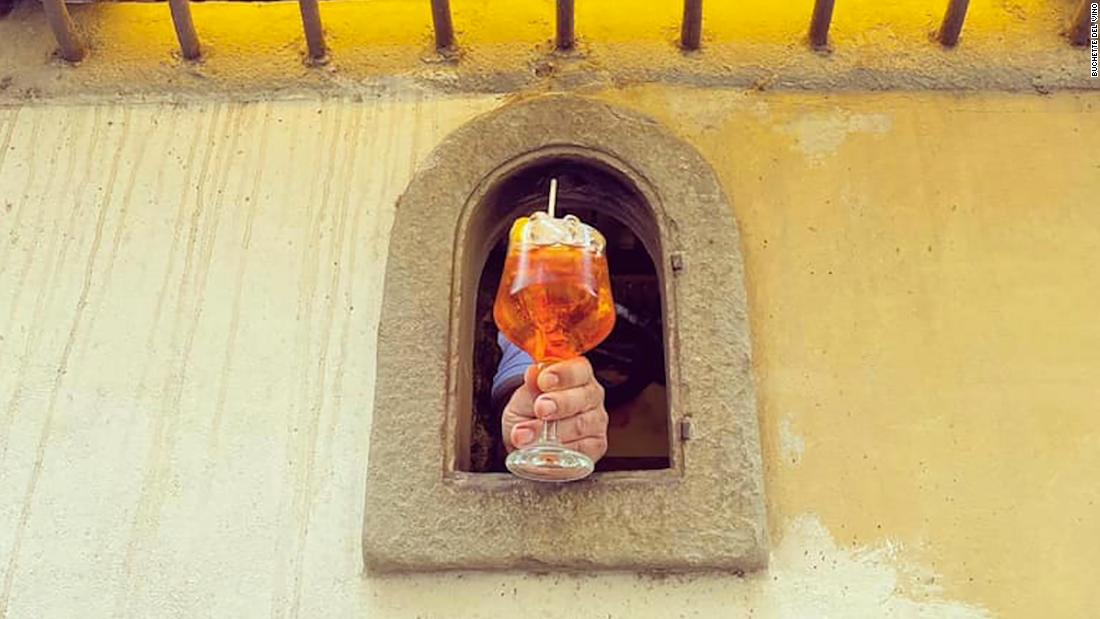 Bars and restaurants around the world are having to rethink the way they interact with customers during the pandemic. In the Italian city of Florence, some are looking to the past: using centuries-old wine windows to dole out food and drinks.

Rising just above ground level, blink and you might miss these tiny openings, called "buchette del vino," (literally "little wine holes") in Italian. The small windows were used to sell wine-to-go during the Renaissance period, and were intended to be cheaper, direct-to-consumer alternatives to taverns and other drinking dens -- not to mention a discreet way for merchants to avoid paying taxes on the alcoholic libations they were peddling.

Those merchants were Florence's elites, many of whom had the foot-tall windows built into street-facing walls of their palatial residences, usually next to the main entrance. Back in the 1500s, a number of the city's aristocrats were also major wine producers in the surrounding countryside. The "buchette" allowed them to trade (or rather, have servants do it for them) their spirits straight from their in-house cellars to basically anyone, with a reduced need for physical contact.

A glass of wine being served through a 'little wine hole' Credit: Buchette del Vino

In May, as Italy eased its two-months-long lockdown, several F&B businesses in Florence, who happened to be based in premises with existing buchette, decided to reopen them, capitalizing on the design's minimal-contact aspect. Wine, Aperol spritzes, ice creams and sandwiches have since been served through the holes, at a safe distance.

Gelateria Vivoli, one of Florence's famous ice cream parlors, was one of the first businesses to make use of its buchette during the coronavirus pandemic (though a bistro named Babae should be credited as the initiator of the trend, having reinstated its buchetta in the summer of 2019). Its wine window features a grey stone frame around a tiny wooden hatch.

"We chose to use our buchetta during Covid-19 both as a protective measure and to bring a smile to passersby," said Giulia Vivoli, a fourth-generation owner of the gelato shop in an email interview. "We've had it open in the past, but to reuse it at this particular moment in time has felt especially apt."

Naghy Kamal, owner of restaurant Osteria delle Brache, followed suit shortly after. "We have one of the oldest wine windows in Florence," he said in a phone interview. "Reopening it at this difficult time has proved incredibly helpful and has really shown that some traditions never die."

"For four centuries, the buchette were one of the preferred ways to get our wine fix," he continued. "They offered on-the-go transactions and convenient, direct exchanges between seller and client, which is exactly how we all want to handle our purchases during Covid-19."

Unlike when they first reopened for service, people can now come into the restaurant to pay, but Kamal said many still prefer to settle their bill through the buchetta. "With the need for social distancing still, we appreciate that."

It's not the first time -- if you don't count the spritzes and gelatos, of course -- that buchette del vino have served as safe trading spots during a health crisis. According to a passage from the 1634 document "Relazione del Contagio Stato in Firenze l'anno 1630 e 1633," wine windows were widely used during the Italian Plague, which ravaged northern and central Italy, including Florence, between 1629 and 1631.

Today there are an estimated 180 buchette del vino in Florence, though hundreds more are believed to have dotted the city back in the 1500s and 1600s. More are found in other towns in Tuscany, from Pistoia to Siena. However, only a handful are still functioning as wine holes. At the turn of the 20th century, as laws on selling wine changed and many aristocratic mansions were converted into residential, multi-apartment buildings, wine windows became obsolete, often bricked up, or turned into mailboxes and doorbells. Many wooden ones were lost during a devastating flood that wrecked the city in 1966, and for lack of preservation efforts.

In 2015, the cultural organization Buchette del Vino was founded to identify, map and preserve the region's remaining wine windows.

On the trail of Italy's strangely beautiful street signs

A man pauses for a cigarette break near a wine window Credit: Robbin Gheesling

"Besides their use, which was unique to Tuscany and Florence in particular, wine windows are tiny but essential vestiges of Renaissance-era architecture," said Matteo Faglia, Buchette del Vino's president and founding member, in a phone interview. "Each one used to offer a literal window into the tastes and architectural styles of the families and buildings they belonged to."

Indeed, while most share an arched shape -- which Faglia said was an identifying mark for the general public, "just like a sign outside a restaurant or a shop" -- each wine window is unlike the other. Some are encased by colored stone frames, others are made out of bricks, others still feature iron grates. And in a few cases, the openings were built straight into the mansion's gates.

The variety is what drew American photographer Robbin Gheesling to document some 140 of them in a book, "Wine Doors of Florence," last year. "Although the wine doors typically have the same dimensions, the differences in the frames that were created for them became quite interesting (to me)," she wrote in an email. "Many matched the larger portone (the main door of the palazzos) or had different decorations altogether."
(image)

The windows' original hatches, many of which are now gone, also "spoke of different aesthetic inclinations," Faglia noted. Usually made of wood, they were sometimes adorned with miniature paintings of still lifes or religious imagery; or coated in different hues. "For the elites, they were just as much displays of their refinement as the mansion they were attached to," he said. "Although of course practicality was paramount in their design."

The buchette had to be only big enough to allow a flask through -- the customer's own, which he or she would pass onto their servers to fill up. This ensured a quick trade for all parties involved and kept business flowing.

And while it makes sense to once again use these features in response to coronarvirus precautions, Gheesling says their reinstatement is also an important way for people that might have never noticed them otherwise -- Florentines included -- to rediscover the buchette. Although, pre-pandemic, a few walking tours of the city included some of the most interesting wine windows on their itineraries (that's how Gheesling was first introduced to them), this tiny cultural patrimony hasn't always been acknowledged.

"While on my scouting walks, I noticed how many people ignored them as they walked past," Gheesling said. "At other times, pure vandalism would be the only thing that would draw your attention to them. I think (their comeback) is fantastic."

Analysis: The tables have turned on health care in 2018

www.cnn.com - 3 years ago
No policy decision during former President Barack Obama's first two years contributed more to the Democratic loss of the House of Representatives in 2010 than the party's drive to pass the Affordable Care Act.
Read More

The best TV deals to shop this Cyber Monday

After the end of Aunt Jemima, what's next?

www.cnn.com - 11 months ago
Conversations about racism and discrimination have been ignited in living rooms and boardrooms across the nation as the Black Lives Matter movement has led the call for an end to systemic racism. We are finally seeing brands such as Land O'Lakes and, most
Read More
More News & Articles