U.S. Border Agents Found A Toddler And A Baby Abandoned Along The Rio Grande

The girl sat next to her baby brother, her hair neatly braided and dressed for an outing, complete with a backpack and a note — but their parents were nowhere to be found, the U.S. Border Patrol said. (Image credit: U.S. Border Patrol)
Author: Bill Chappell
Published: 2021-09-16 01:47 pm 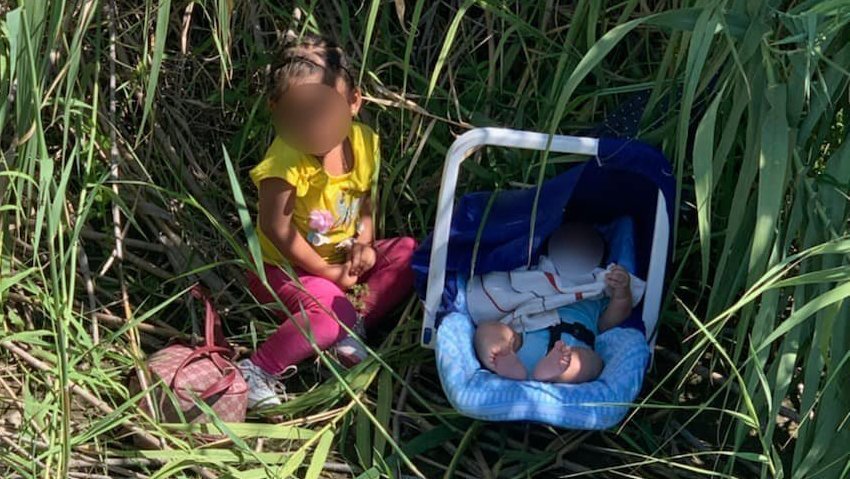 U.S. Border Patrol agents found a little girl and her baby brother abandoned along the Rio Grande River near Eagle Pass, Texas, this week, in what the local chief patrol agent calls a "heartbreaking" discovery. The agency released a photo of the children, who were taken into custody but did not require medical care.

"A note under the infant safety carrier revealed the 2-year-old girl and 3-month-old boy, both nationals of Honduras, were siblings," the U.S. Border Patrol said in a statement about the discovery.

The agents were patrolling the border river when they happened to notice "a color they would normally not see in the river and turned back to investigate," tweeted the account of Interim Del Rio Sector Chief Patrol Agent Robert N. Garcia.

The border agents found the little girl dressed in pink and yellow, with her shoes tied and her backpack at her side. Her brother was next to her, buckled into an infant carrier seat.

"It is heartbreaking and frustrating to know that there are children being abandoned without remorse or concern for their lives and wellbeing," Garcia said via Twitter as he praised the agents for their attention to detail.

On the sector's Facebook posting about the children's abandonment, many people called it an act of desperation. As one commenter wrote:

"I'm not sure why they are abandoned, but that little girl is wearing cute clothes, has a purse and her hair is braided beautifully. That baby looks to be covered from the sun, and strapped in the seat correctly. I bet their mom was horrified to leave them... But it's obvious they were loved."

The children were taken to Border Patrol's processing facility in Uvalde, Texas. The agency did not respond to NPR's request for an update on their status before this story published.

During the summer, Garcia's predecessor as the Del Rio chief, Austin Skero, said the sector was averaging more than 1,000 migrants a day.

Weekend Shootings In Texas And Wisconsin Add To Tally Of U.S. Gun Deaths

www.npr.org - 6 months ago
After a big surge in gun deaths in 2020, high-profile mass shootings this spring are a reminder that America's epidemic of gun violence persists. (Image credit: Jim Vertuno/AP)
Read More

www.npr.org - 12 months ago
After a year away, an NPR reporter returns to Lebanon to find a country racked by inflation, degraded services and the pandemic and still picking up the pieces from August's explosion in Beirut.
Read More

For Many Areas, Count Of Homeless Population Is Canceled, Or Delayed

www.npr.org - 9 months ago
The annual street survey of homeless people is being delayed or put off completely in some parts of the U.S. during the pandemic, even as the country's unsheltered population appears to be growing. (Image credit: Yasin Ozturk/Anadolu Agency via Getty
Read More

www.npr.org - 11 months ago
The thoughtful soprano believes that art is good at questioning, challenging and provoking. But the real question, she says, is: "What happens after the provocation?" (Image credit: NPR)
Read More
More News & Articles