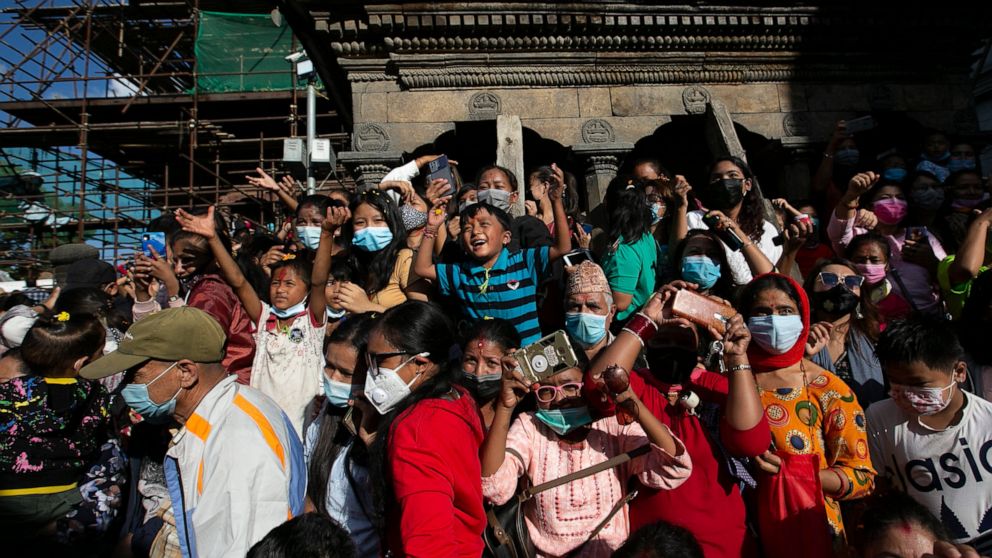 KATHMANDU, Nepal -- Tens of thousands of devotees packed the old palace courtyard in the heart of Nepal's capital on Sunday to celebrate the feast of Indra Jatra, marking the return of the festival season in the Himalayan nation after it was scaled down because of the pandemic.

The weeklong Indra Jatra precedes months of other festivals in the predominantly Hindu nation.

Kumari, a young girl who is revered by both Hindus and Buddhists in Nepal as the living goddess, left her temple palace for the first time in two years and was driven around the center of Kathmandu in a wooden chariot pulled by devotees.

President Bidhya Devi Bhandari and the nation's highest officials also lined up to get her blessing, together with the tens of thousands of others along the short route from her temple palace and around the heart of the city.

Security was stepped up and organizers announced plans to control the number of those attending.

The Indra Jatra festival marks the end of monsoon rains and the beginning of autumn. It also celebrates the end of the rice farming season.

Armed police guarded the alleys and roads leading to the main courtyard while volunteers sprayed sanitizers and distributed masks to the devotees.

Officials, priests, religious leaders and organizers held several meetings before deciding to go ahead with the public festival.

“If we continue to halt the festival every year because of COVID-19, there is a big chance that our tradition and rituals could just fade away. We want to save our tradition and heritage but at the same time keep everyone safe from the virus," said Gautam Shakya, the priest and main caretaker of Kumari.

Gautam said they have been making public appeals to keep away from the main venues of the festivals as far as possible, fearing the spread of the coronavirus.

“We are asking people to understand that to save the tradition, rituals and heritage, they should keep away from the venue this year and if you are safe, then you can watch these festivals in the many years to come," he said.

Kiran Shakya of the government's Trust Corporation, which is in charge of the festivals, said special security arrangements were made to control the crowds and follow health protocols.

“We want to set an example of how a popular festival can be held safely," he said.

Bishnu Lal shrestha, who was among the throngs of jubilant devotees waiting along the narrow streets to receive Kumari's blessing, said he was thrilled that the festivals are back after two years.

“We are praying that the gathering of devotees will not be a reason for another spread of the coronavirus but the gods will protect us," Shrestha said.

Nepal has imposed several lockdowns and other restrictions since the pandemic hit. According to the Health Ministry, there have been 784,000 confirmed cases with more than 11,000 deaths. Only 19% of the population have been fully vaccinated.

abcnews.go.com - 1 year ago
Longtime matriarch of the Memphis Zoo elephant herd had been on hospice care.
Read More

abcnews.go.com - 4 months ago
An opposition center-right party has come on the top in Sunday’s local election in Finland, ahead of Prime Minister Sanna Marin’s ruling Social Democratic Party in the first election for the popular young leader who took office 18 months ago
Read More
More News & Articles