More than half of the New York Jets’ defenders had a chance to tackle Damien Harris after quarterback Mac Jones planted the ball in his gut and the running back sprinted up the middle. It was the 10:37 mark of the third quarter, two plays after Zach
Author: Andrew Crane
Published: 2021-09-20 12:10 am 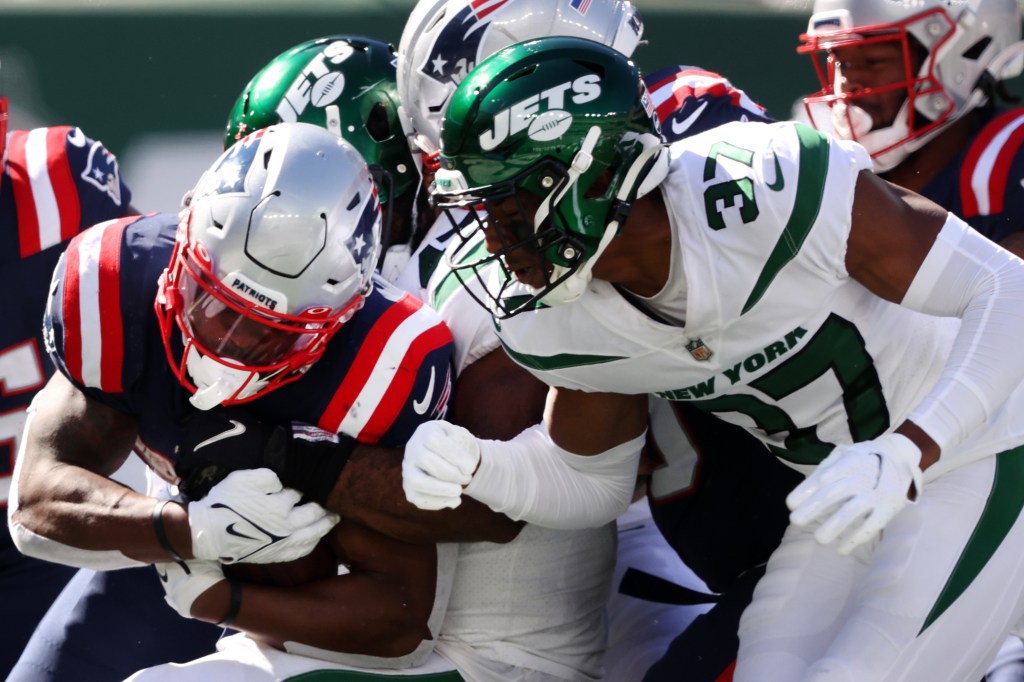 More than half of the New York Jets’ defenders had a chance to tackle Damien Harris after quarterback Mac Jones planted the ball in his gut and the running back sprinted up the middle.

It was the 10:37 mark of the third quarter, two plays after Zach Wilson’s fourth interception, and New England’s offensive line had taken its entire left side — starting with center David Andrews — and pushed right. To that point, the Patriots had managed just 13 points and only one drive had reached the red zone. Despite shaky play from the rookie quarterback Wilson, the Jets’ defense had prevented the game from spiraling out of control.

But everything changed when a Jets’ defender came out of the backfield and missed the first tackle, diving to grab Harris near the line of scrimmage. Harris escaped his grasp, though, and broke a second. Then a third, a fourth and eventually — after scampering 26 yards — he fell into the end zone once a seventh defender failed.

Harris’ touchdown, one of just two New England managed on Sunday, stretched the game further out of the Jets’ reach in their 25-6 loss at MetLife Stadium.

“It’s something we can’t have,” defensive lineman Sheldon Rankins said. “It’s not our standard, and we won’t stand for it.”

The Jets’ defense needed to give the ball back to Wilson in that situation, Rankins said, allowing him to correct the “growing pains” that four interceptions caused while positioning him to expand the flashes he displayed on other drives. The timing of that Harris touchdown, and the deflation each missed tackle compounded, prevented that from happening. Wilson’s head was still buried in a tablet on the sidelines, surrounded by backup quarterback Mike White and a pair of coaches.

After the first missed tackle at the line, tight end Jonnu Smith blocked Marcus Maye near the first-down marker, preventing the safety from grabbing Harris’ jersey with both hands. That allowed Harris to break inside the 20-yard line, when he juked around Adrian Colbert. Five yards later, linebacker Quincy Williams grabbed the running back with both arms, but they slid down Harris’ side instead.

That gave Harris additional open space to work with, plowing into a pile of four defenders near the goal line and dragging them all into the end zone with some help from his quarterback Jones, who helped push him across.

The key to fixing those tackles, Rankins said, starts when defenders drive with their feet, not leaving them trailing behind. They needed to limit the attempted arm tackles too, he added.

And they did for the most part. Harris finished with 62 yards on 16 carries, an average of 2.4 yards per run with that long run removed. Jones managed 20 additional yards on five carries. But then the second touchdown came, the one with the seven missed tackles and 26 yards of porous defense, and undid some of that progress.

“Got to find any way to get him down, get 11 hats to the ball,” Maye said. “[Harris] did a great job with the effort. We’ve got to be better on our part.”

FBI agent killed, 4 others hurt while serving warrant in Florida

nypost.com - 9 months ago
At least one FBI agent was killed and four others injured Tuesday while serving a warrant in Florida. A federal law enforcement source told the Miami Herald at least five FBI agents were shot at a home in Sunrise, leaving two “gravely wounded.” Police in
Read More

North Korean hackers tried to steal $1.3B in series of heists, DOJ says

nypost.com - 8 months ago
Three North Korean military hackers attempted to steal more than $1.3 billion in a number of complex heists to enrich the hermit regime, according to a newly-unsealed Department of Justice indictment Tuesday. The trio, who were described by justice
Read More