Ancient Footprints Push Back Date of Human Arrival in the Americas 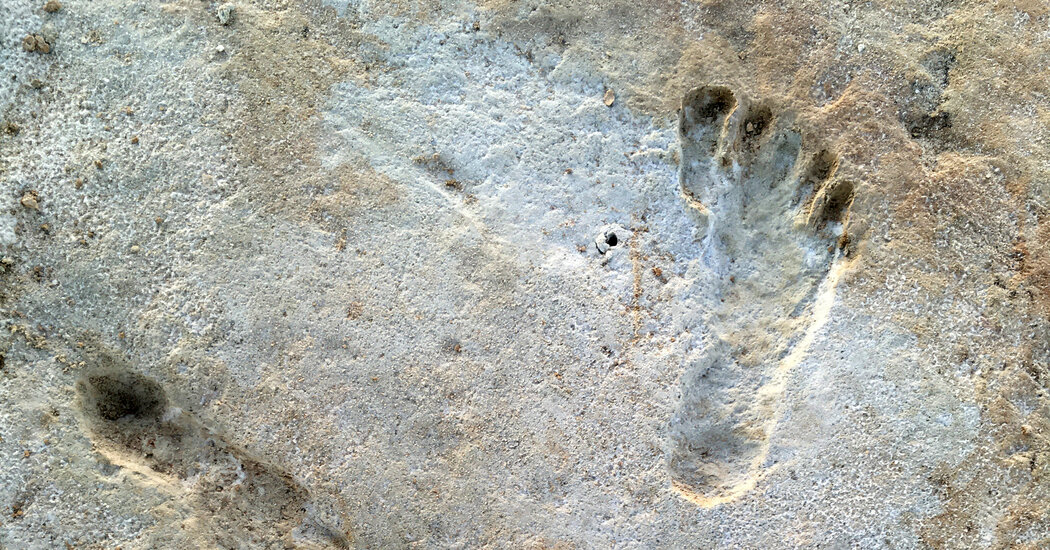 Ancient human footprints preserved in the ground across the White Sands National Park in New Mexico are astonishingly old, scientists reported on Thursday, dating back about 23,000 years to the Ice Age.

The results, if they hold up to scrutiny, would rejuvenate the scientific debate about how humans first spread across the Americas, implying that they did so at a time when massive glaciers covered much of their path.

Researchers who have argued for such an early arrival hailed the new study as firm proof.

“I think this is probably the biggest discovery about the peopling of America in a hundred years,” said Ciprian Ardelean, an archaeologist at Autonomous University of Zacatecas in Mexico who was not involved in the work. “I don’t know what gods they prayed to, but this is a dream find.”

For decades, many archaeologists have maintained that humans spread across North and South America only at the end of the last ice age. They pointed to the oldest known tools, including spear tips, scrapers and needles, dating back about 13,000 years. The technology was known as Clovis, named for the town of Clovis, N.M., where some of these first instruments came to light.

The age of the Clovis tools lined up neatly with the retreat of the glaciers. That alignment bolstered a scenario in which Siberian hunter-gatherers moved into Alaska during the Ice Age, where they lived for generations until ice-free corridors opened and allowed them to expand southward.

But starting in the 1970s, some archaeologists began publishing older evidence of humanity’s presence in North America. Last year, Dr. Ardelean and his colleagues published a report of stone tools in a mountain cave in Mexico dating back 26,000 years.

Other experts have been skeptical of such ancient finds. Ben Potter, an archaeologist at the Arctic Studies Center at Liaocheng University in China, said that some of these supposed tools might actually be oddly shaped rocks. Dr. Potter also questioned some of the dates scientists have assigned to their finds. If a tool sinks into underlying sediment, for example, it may appear to be older than it really is.

“There are unresolved issues with every single one of them,” Dr. Potter said of the older purported sites. “None of them are unequivocal.”

The study at White Sands now adds a new line of evidence for an early arrival: Instead of tools, the researchers have found footprints.

The footprints were first discovered in 2009 by David Bustos, the park’s resource program manager. Over the years, he has brought in an international team of scientists to help make sense of the finds.

Together, they have found thousands of human footprints across 80,000 acres of the park. One path was made by someone walking in a straight line for a mile and half. Another shows a mother setting her baby down on the ground. Other tracks were made by children.

“The children tend to be more energetic,” said Sally Reynolds, a paleontologist at Bournemouth University in England and a co-author of the new study. “They’re a lot more playful, jumping up and down.”

Mathew Stewart, a zooarchaeologist at the Max Planck Institute for Chemical Ecology in Jena, Germany, who was not involved in the study, said that the evidence that humans had left the footprints was “unequivocal.”

The footprints were formed when people strode over damp, sandy ground on the margin of a lake. Later, sediments gently filled in the prints, and the ground hardened. But subsequent erosion resurfaced the prints. In some cases, the impressions are only visible when the ground is unusually wet or dry — otherwise they are invisible to the naked eye. But ground-penetrating radar can reveal their three-dimensional structure, including the heels and toes.

Mammoths, dire wolves, camels and other animals left footprints as well. One set of prints showed a giant sloth avoiding a group of people, demonstrating that they were in close company.

“What is fascinating about the study of footprints is that they present snapshots in time,” Dr. Stewart said.

The work of determining the age of the prints fell to Jeffrey Pigati and Kathleen Springer, two research geologists at the United States Geological Survey.

In 2019, they went to White Sands to get a feel for the site. Walking around some of the footprints, the researchers sometimes came across ancient seeds of ditch grass that had grown by the lake. In some spots, the abundant seeds formed thick blankets.

The researchers brought some of the seeds back to their lab and measured the carbon in them to determine their age. The results came as a shock: The ditch grass had grown thousands of years before the end of the last ice age.

Dr. Pigati and Ms. Springer knew those numbers would be controversial. So they embarked on a far more ambitious study. “The darts are going to start flying, so we better be ready for them,” Dr. Pigati recalled.

The scientists dug a trench near one cluster of human and animal footprints to get a tighter estimate of their age. On the side of the trench, they could see layer after layer of sediment. Carefully mapping the surrounding ground, they were able to trace the footprints of humans and animals to six layers in the trench, interspersed with eleven seed beds.

The researchers collected ditch grass seeds from each bed and measured their carbon. These measurements confirmed the initial results: The oldest footprints at the site — left by an adult human and a mammoth — were located below a seed bed dating back about 22,800 years.

In other words, the people who left the footprints walked around White Sands about 10,000 years before the Clovis people. The youngest footprints, the researchers estimated, dated to about 21,130 years ago. That meant that people lived or regularly visited the lake for about 2,000 years.

“This is a bombshell,” said Ruth Gruhn, an archaeologist at the University of Alberta who was not involved in the study. “On the face of it, it’s very hard to disprove.”

Dr. Potter praised the White Sands team for their care in the new study, saying that it is the strongest case yet made for people in the Americas before 16,000 years ago. But he would feel more confident in the extraordinary age of the prints, he said, if there were other lines of evidence beyond the ditch grass seeds. The seeds could have absorbed older carbon from the lake water, making them seem older than they really are.

“I’d like to see stronger data, and I don’t know if it’s possible to get stronger data from this particular site,” he said. “If it’s true, then it really has some profound implications.”

If humans were well established in New Mexico 23,000 years ago, they must have started spreading down from Alaska long before that. “That starts to wind back the clock,” said Dr. Reynolds of Bournemouth University.

Some researchers have argued that people could have spread through the Americas even when the glaciers were at their peak. Instead of traveling down the mainland, they could have moved along the coast. Alternatively, Dr. Ardelean and his colleagues have proposed that people traveled inland more than 32,000 years ago, before Ice Age glaciers reached their maximum extent and blocked off that route.

Dr. Gruhn argued that both scenarios remained possible in light of the new evidence from White Sands. It would take more work to find earlier sites that favored one of them over the other. “We’ve got a lot to do,” she said.

Mr. Bustos and his colleagues have more investigations planned at White Sands. They want to learn about the behavior of the people who left their footprints there. Did they hunt the animals around them? Did they live permanently at the lake or just pay it visits?

They must work quickly. The erosion that has revealed the footprints will erase them from the landscape in a matter of months or years. Countless footprints are disappearing before the scientists even lay eyes on them.

“It’s kind of heartbreaking,” Mr. Bustos said. “We’re racing to try to document what we can.”

Many Unvaccinated Latinos in the U.S. Want the Shot, New Survey Finds

www.nytimes.com - 5 months ago
Issues of access and fears of employment and immigration consequences have kept their Covid vaccination rates low, the findings suggest.
Read More

How to Survive a Bear Attack

www.nytimes.com - 2 months ago
How much do you know about bear behavior and avoiding a bear attack? What you know — or don’t know — could determine how likely you are to survive an encounter with a testy bear.
Read More

www.nytimes.com - 4 months ago
Is the world finally ready to take on tax havens?
Read More