Escaped Long Island bull captured after 2 months on the lam

Barney the runaway Long Island bull who went on the lam more than two months ago was captured on the same farm where he escaped officials announced September 23, 2021.
Author: Natalie O'Neill
Published: 2021-09-23 02:48 pm 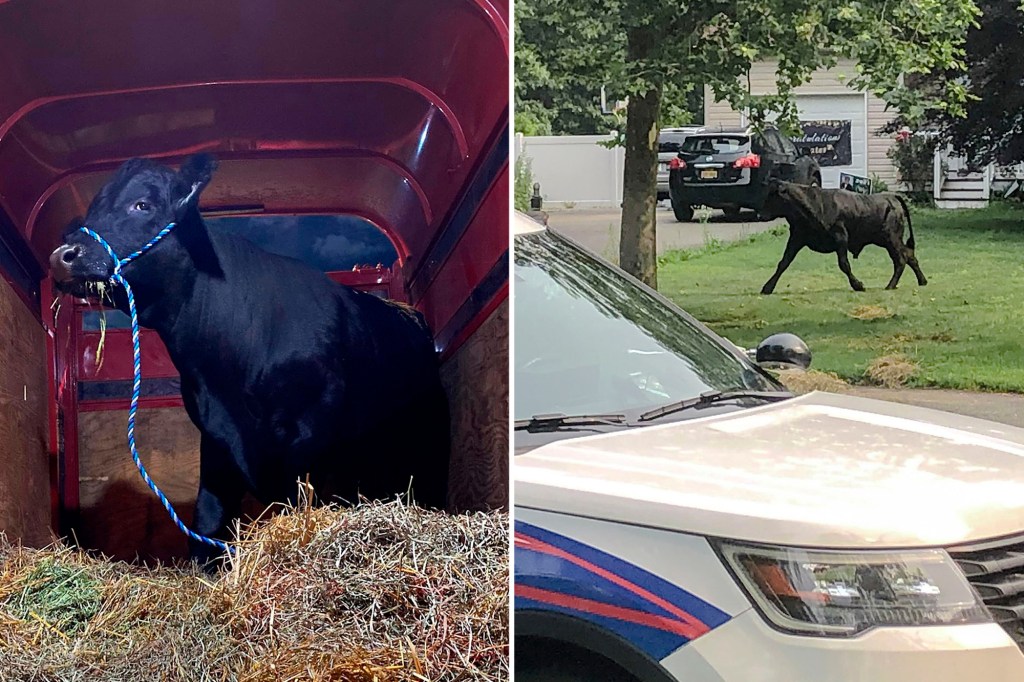 He’s no longer on the moo-ve!

Barney the runaway Long Island bull, who went on the lam more than two months ago, was captured on the same farm where he escaped, officials announced Thursday.

The brash bovine — who was destined to become dinner before he broke free in July on the eve of his slaughter — was lured with food to a former duck farm in Moriches on Wednesday night, according to the Suffolk County ASPCA.

Mike Stura, owner of the Skylands Animal Sanctuary & Rescue in Wantage, New Jersey, set up a coral and a feeder with a head-locking device to entice the bull to the farm and catch him.

He then led Barney by rope into his trailer and moved him to the 232-acre New Jersey farm, where he’ll live out his days with other rescued animals, Suffolk County ASPCA Chief Roy Gross told The Post.

“It’s a beautiful ending to something that could have ended badly,” Gross said.

“The concern had been that now, during hunting season, somebody would shoot it,” Gross said.

“To catch him, a tranquilizer gun would have worked but we could have ended up killing it — or it could have run onto a road and caused a fatality,” he said.“This is the best possible outcome.”

The 1,500-pound creature had eluded cops and animal rescue workers for weeks, hoofing it through a wooded area and nearby suburbs — and leaving behind a trail of poop and markings.

Suffolk County cops pulled out all the stops to catch him, launching helicopter and drone searches, and installing digital signs on Sunrise Highway to warn drivers to keep an eye out for the beefy escape artist.

At one point, animal rescue workers even brought out a cow in heat named Norma Jean in an attempt to entice Barney out of the woods — but he didn’t bite.

The raging bull busted out of the farm on Barnes Road in Moriches by breaking through a fence on July 20, police said.

Stura is now considering changing his name from Barney — a nod to the road where he escaped — to Bully Joel, after the legendary Long Island-bred singer, Gross said.

Migrant caravan on the move in Honduras in uncertain times

nypost.com - 9 months ago
SAN PEDRO SULA, Honduras — Honduran migrants began walking toward the Guatemalan border before dawn Friday, driven by deepening poverty and the hope of a warmer reception if they can reach the United States border. They quickly dispersed along the
Read More

Diamondbacks vs. Pirates prediction: Roll with the Snakes

nypost.com - 2 months ago
The D’backs’ Madison Bumgarner (7-7, 4.06 ERA) has been reliable. Phlogged Philly in his latest and has allowed only 10 runs in his last 46 ²/₃ innings.
Read More

nypost.com - 1 year ago
The body of a man in his 30s was discovered floating in the water off the Rockaways early Monday, cops said. A passerby discovered the body just before 5 a.m. near Beach 91st Street bobbing near the rocks, close to a jetty, and notified police, authoritie
Read More